Normally, we find nothing but wall to wall product announcements during the week of COMPUTEX. For one company the product announcements have taken a back seat as they have been accused of design theft. CaseLabs is accusing Thermaltake of copying the design of some of their previously released cases, and then releasing very similar designs at future shows. This latest COMPUTEX event is the straw that finally broke the camel’s back.

Our friends over at Legit Reviews pointed this out to us. Basically two Thermaltake case announcements are what triggered these accusations. Pictures have been posted of these two cases, and it’s hard to argue that don’t bear a striking resemblance to the CaseLabs Merlin SM8 and TH10 enclosures. 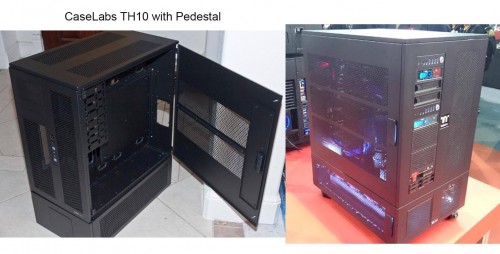 In addition to these pictures, there are reports that there are many more cases in the Thermaltake booth that look like CaseLabs designs. CaseLabs is understandably upset at this turn of events. Company Vice President Kevin Keating issued a statement on Facebook about the issue. We’ve copied it below. The name of the Thermaltake employee has been redacted.

For those who know me, you know I am not a person to create drama. Nor am I a person to be dishonest, or try to slander someone out of spite. With that being said I can no longer hold my tongue about “Case Designer” at Thermaltake. For those of you at Computex you may know what I’m talking about… Thermaltake has just announced their “new” case line last night, the “new TT premium line W series extreme chassis”. It is more than evident this is a stolen concept. Not only did [Thermaltake Case Designer] clone our Mercury line, with his Core line, but now they have stolen our MAGNUM and Merlin designs as well.

Sit back, here is how the story goes…

Back in July of 2013 we exhibited at PDXLAN 22 with 2 of our Merlin SM8 cases which we gave away (Matt Conwell hooked us up, and I must say he is an awesome person.). At this event people for the first time got to see us with one of our cases in person. We didn’t have a booth, but we got so much good feedback we decided to come back for PDXLAN 23, but this time as an official sponsor of the event. We got a booth and we brought a bunch of different cases to show off including the Mercury case line (S3, S5 and S8). It was at this time we found out Thermaltake was a major sponsor if this event (and have been) and their case designer was in attendance (as he usually is). [Thermaltake Case Designer] was introduced to my dad (CL owner) and I via a mutual friend. [Thermaltake Case Designer] then proceeded to tell us how much he liked our cases, and he was a big fan. He seemed very genuine, and overall a nice person. He started asking us about our cases and said, “Wow I wish our company made cases like this, can I take some pictures to send to our R&D department?” A bit flabbergasted I told him no which he then replied, “Well I guess we will just buy one then.” I was a little put off, but whatever. I shrugged it off, and kept talking to him about the cases. Oh and I almost forgot… Thermaltake did buy one of our cases back in September of the 2013, just 2 months after we showed off the Merlin SM8 for the first time. I guess he wasn’t kidding when he said he would just buy a case…

Next event, PDXLAN 24. We had a Mercury S3 we brought with us for Sapphire. They liked the fact that it was horizontal with a window on the side so they could show off their GPU. Thermaltake, AKA [Thermaltake Case Designer], gave Sapphire an AIO 240 cooler for the build and helped them build the case at the event. Once the case was up a running, [Thermaltake Case Designer] came over to our booth and shook my dad’s hand. He said, “That was such a great case to build in, nice work!” Well my dad felt very gratified knowing another manufacture was giving him praise for his design. We also brought with us our new prototype, the X2… then this is where it all turned ugly…

PDXLAN 25. Thermaltake announces the Core case line, the X1, X2 and X9 cases. The cases feature a modular design, horizontal mobo cube style, windows on both sides, drop-in radiator mounts, stackable, mITX, mATX and ATX form factors and a ventilation pattern identical to all of our cases. These features ALL are part of the Mercury line which we brought with us just 1 year ago, and what he built in 6 months prior. Funny it takes companies about a year to release new product, right? We knew about the cases before the event, but we kept our cool. My dad even went as far to speak to [Thermaltake Case Designer] and ask him how he was doing. I kept pretty quiet. [Thermaltake Case Designer] told my dad, “The new line was doing very well and hoped that one day he would make cases as good as ours. They were not there yet, but it was his main objective while working there.”

Computex 2015… [Thermaltake Case Designer] was thrilled to announce “My new babies have arrived!” on Facebook. I was fortunate enough to see this late at night so I had plenty to keep me from sleeping well (actually not at all really, yay for coffee!). I also received several notices from people at the event telling me that Thermaltake had ripped us off yet again.

All of these events happened, and I did not make up anything, not a thing. Simply put, [Thermaltake Case Designer] and Thermaltake, you disgust me. We are all for innovation, and welcome new case concepts from other manufactures. We have said this publicly and I’m saying it again. There have been some AMAZGING things to happen to the enthusiast market, and it’s better for everyone. Copying people’s existing concepts and calling them your own stifles innovation and hurts the industry with dull already done designs. We are a small family owned and operated business who make their products in the USA with pride. Anyone can steal designs and have them made overseas for much much less. So do something with your own creativity and concepts or do nothing at all.

[Thermaltake Case Designer] if you read this and I hope you do. The only reason I became friends with you on Facebook was because my dad genuinely believed you were a good guy and that I should give you a chance. That’s why you may have noticed I sent you a friend request after you sent me one. I had deleted your request, and after speaking to my dad I sent you one, and voila, we became “friends”. I feel a bit “high school” adding this part, but I wanted you to know that.

For all who have read this, thank you for taking the time. We have worked tirelessly on our designs and can’t just sit back while people rip us off. I am asking everyone to share this post. Please, it needs to be done or businesses like Thermaltake will continue to taint the industry with rip-off products. To all of you who noticed the stolen concepts and took the time to tell us, thank you your support means the world to us.

Take what you want from that statement. This has definitely affected Mr. Keating on a personal level. He addresses this statement directly to the specific case designer at Thermaltake, on multiple occasions. The enthusiast community is a little more divisive on the whole situation. Some are accusing Thermaltake of cheating, and they aren’t happy with the perceived theft of intellectual property. Others are praising Thermaltake for ripping off CaseLabs as they can’t afford the real products from CaseLabs, but can afford Thermaltake products.

What’s our take? Well as my bio says, I’ve been around and I’ve seen the rise and fall of case modding from the late 90s up until today. The similarities in these products is undeniable. The issue is that, with very few exceptions, none of the companies that sell these products actually manufacture them. They all use the same few core ODMs (original design manufacturer), which is going to lead to multiple product lines from multiple companies having some striking similarities and subtle differences. Then there’s the problem that you can only do so much with an ATX computer case (or fan controller, or whatever else the copying accusation is based on) to differentiate it from the dozens of other products.

Does this de-claw the accusations made by CaseLabs? No. It just means that the argument isn’t going away anytime soon. The argument has existed for a while, and companies like Thermaltake will have to weather the storm for now.