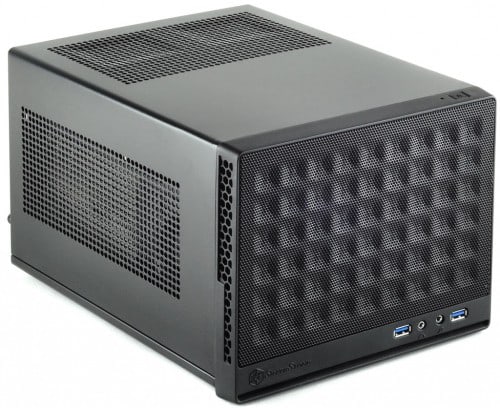 At COMPUTEX 2014, we spent a bit of time covering what Silverstone thinks, is one of the better executions of a mini ITX form factor chassis. The called it the Silverstone SG13, and they considered it their “fighting price” mini ITX case. But it looks like the company couldn’t wait to announce it during CES 2015, and have lifted the veil a few days early. It seems these quiet launches might be a thing for the company in 2015 as it also launched a new case over the holidays, when no one else was looking.

The Silverstone SG13 is a unique chassis with the ability to run a full sized graphics card, full sized power supply, and a water cooling system, in a single, compact, chassis. That’s a ton of hardware, but it really has to be seen to be believed. 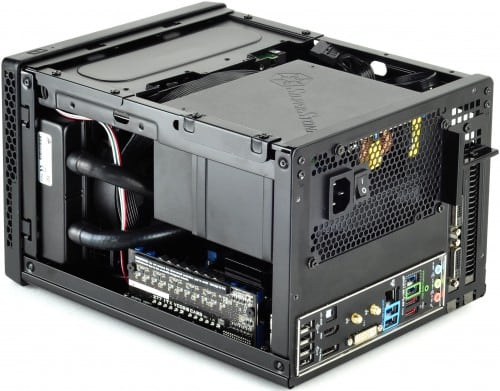 As you can see from the photo above, it is totally crammed with everything we listed above, and it all fits. The Silverstone SG13 is spec’d for a graphics card up to 10.5 inches, which means even a GTX 980 could fit in there. Silverstone’s own Strider 750W unit fits in there so there’s plenty of power for a very compact and capable gaming machine.

In terms of storage, the Silverstone SG13 does away with the optical drive, and replaces that area with a drop down mounting platform, giving you a place to put a 2.5 inch and 3.5 inch drive, side by side. With some mini-ITX boards sporting M.2 SSD slots, that means up to three storage devices could be crammed in there with ease.

The Silverstone SG13 will come in at an unbelievable fighting price of approximately $29.99 US, which totally goes for the jugular in this segment. There will also be an option for both the mesh paneled model shown above, and a solid panel, for additional cost, if you’re looking to build something quieter.

CES 2015 coverage will be coming up soon so stay tuned for more announcements both before and during the show which runs Jan 6th to 9th 2015. Futurelooks will be on site and will also be doing some exclusive video interviews on our YouTube Channel. Also check out MEGATechNews for the more gadget oriented perspective.