Search
Home
Reviews
Prev6 of 6Next

Idle, graphic testing, and full load consumption was averaged over 30 minute intervals each. Unigine Heaven demo was used for graphical testing as it also uses the CPU like many of the latest games. OCCT was added to the mix to give us a simulation of a fully loaded system. 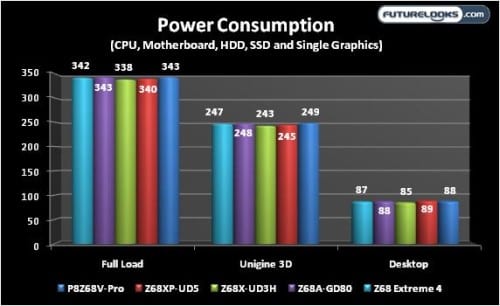 Well, this is slightly uneventful. All of the systems are pretty comparable without discrete graphics cards. Things separate ever so slightly with one installed. We’re still not talking about any differences compared to the P67 averages.

There are varying degrees of noise emissions that electronics produce. Typically, we look for any audible noises rating them by the distance you can hear them at. I’m happy to report that I couldn’t find any Z68 motherboards producing any kind of noise at all. This time around, they are extremely quiet which is good news for system integrators.

The Good and Bad with Z68 Offerings

Each Z68 motherboard in the round up are formidable combatants when it comes to providing users with well tuned choices thanks to LucidLogix Virtu and Intel Smart Response. GIGABYTE even recently announced PCIE 3.0 support for their entire 6-Series motherboards to sweeten the pie. 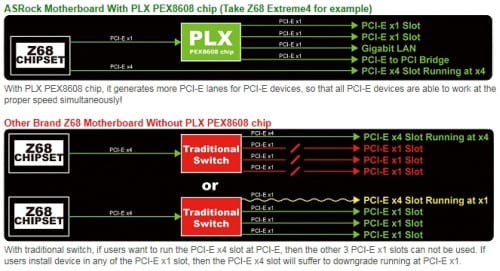 However, without PCIE 3.0 expansion cards, filling up the group’s expansion slots will slow some features down if not disable them. On the one hand, most users don’t often pack the expansion slots which means a very small chance of running in to connectivity issues. On the other hand, any consumer would rather buy a motherboard without any restrictions no matter how unlikely the issues might be. As prosumers, we err on the side of prevention.

If you aren’t sure either we present exhibit A: P67 Cougar Point SATA3Gbps issue. It was highly unlikely a noticeable percentage of users would experience an issue but a revision was made anyway. Without redesigning the Z68 chipset, a PLX chip is the answer to remedying any current or future PCI Express bus limitations and ASRock was the only one in the field to accommodate this.

Scoring and penalizing all of the boards is a little skewed because the PCIE limitation is mainly due to the Z68 chipset design which is shared by all the boards save for the ASRock Z68 Extreme 4. Thus, we decided to score as though users will pack their expansion slots and would be a bit disappointed if they suddenly lose expansion card performance.

With this in mind, extra credit must be given to the Z68 Extreme 4 because ASRock took the initiative to fix things giving proper value to their motherboard. If the rest of the pack had done the same, the ASUS P8Z68-V Pro would have earned the number one spot with the MSI Z68A-GD80 right on its tail.

ASUS continues to design their platforms for any kind of user whether it be overclockers, gamers, or power conscious pros. We continue to find the ample number of tangible motherboard features useful even if we enthusiasts don’t always need them. With a flick of a switch, the V-Pro can go from mean to green. Stability and reliability are naturally top notch. The board also offers useful BlueTooth connectivity which none of the other manufacturers offer in an ATX solution. Overclockers will find that this board rises to the occasion. As long as you don’t pack the board’s expansion ports, users will enjoy top notch performance.

The strengths of this board are its performance and price. Performance is within the ranges of the competition yet is very simple to get up and running especially if you’re a gamer in need of SLI or CrossfireX. Naturally, you shouldn’t expect high end overclocking on a very lean 8 Phase VRM though many users will be happy with 4.5GHz potential. We’re happy to see Easy Tune 6 continue to improve in that area. And, the EZ Smart Response software rocks for setting up Intel Smart Response so easily. Overall, we highly recommend the GIGABYTE GA-Z68X-UD3H-B3 motherboard for entry level, cost conscious consumers looking for simplicity and performance.

The Z68XP is a welcomed platform now offering 20-Phase VRM high end performance potential as well as LucidLogix Virtu. There’s overclocking to be gained if you’re willing to push it to more extreme levels. We find ourselves on the fence as it continues to use the standard looking Hybrid BIOS. While easy to navigate, we are ready to see something that matches GIGABYTE’s unquestionable quality. Their EZ Smart Response software is extremely useful. The board is far more aggressive than Easy Tune 6 can keep up with. Unfortunately, the $269.99 price range is $30 more than it’s $239.99 Z68X-UD5 sibling which would have been near perfect if it included Virtu. While it’s great that it now has Virtu, $269.99 should definitely include a PLX chip for unlimited operation.

What makes this board so attractive is that any regular or pro user can experience what this overclocking noise is about with a single press of the OC Genie II button. Any K-SKU processor can go from 1.6GHz to about 4.2GHz instantly. The EUFI/Click BIOS is one of the easiest to figure out. The board includes software that is rock solid as ever and should please enthusiasts as well as regular users. The GD80 is very easy to set up and provides great system stability. The single 6-pin auxiliary power port next to the top PCIx1 slot could use a slight location adjustment though. Users who require the board’s maximum expansion connectivity may run in to limitations as with most of the board’s in this round up. Still, at $229 USD, this board is definitely worth the price. It’s just not top dog in this round up.

ASRock continues to improve quality and design. Performance was extremely comparable to the competition in our labs. In fact, the Extreme 4 is the only motherboard to give users the most unhindered connectivity simply from one additional PLX chip controller which makes sure the PCIE bus has room to stretch. Overclockers will be pleasantly surprised with their results. Some more polishing in the area of design, software, and BIOS would really solidify ASRock’s position among the DIY users as well as system integrators and enthusiasts. Users don’t like to see “trial software” and we’re hoping that ASRock discontinues putting it in the box or just offering the real deal. At $184.99 USD, the ASRock Z68 Extreme 4 offers all of the important features consumers want in a high performance, fully functional platform. For that reason, we’re giving it our Editors’ Choice award in this gruelling round up.