Getting a Little More with Twhirl 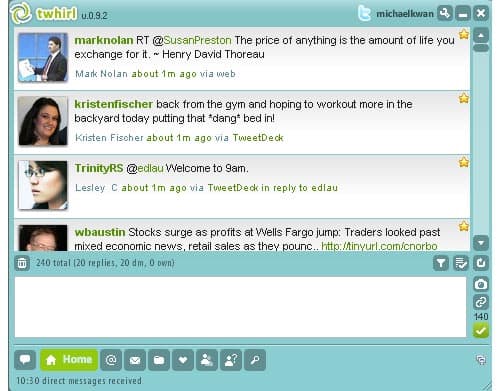 The first Twitter client that I ever used was Twhirl. It was easily one of the most robust offerings at the time, because it came equipped with a number of notable “extra” features that expanded the Twitter experience. For example, URL shortening was integrated right into the client, allowing you to choose from a number of options. There was also one-click access to TwitPic uploading, so you could quickly share a picture with your friends as well.

Just as with Twitterific, the tweets are color-coded in Twhirl. The “home” tab shows everything, but you can drill down into just replies or direct messages using the appropriate tab too. There are also sections to save your favorite tweets, look up profiles, and search through Twitter for keywords.

TweetDeck Steps Up the Integration 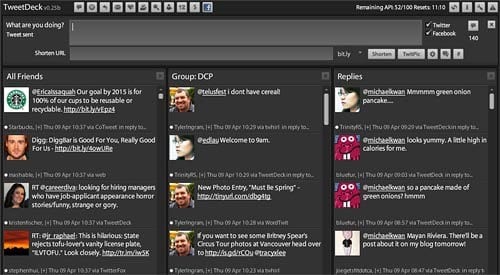 Are you a Twitter pro? Do you follow thousands of people and have thousands of people following you? Are you not satisfied with the basic Twitter experience and want to pull as much as you can from this popular microblogging service? TweetDeck just might be for you and that’s largely why it has grown to become one of the most popular clients today.

The single biggest feature that separates TweetDeck from all the other aforementioned Twitter clients is the ability to group the people you follow. This may not be too useful if you’re only following 10 or 20 people, but when you’re following several thousand, a full feed can be very overwhelming and largely unusable. By setting up the groups, you effectively have several separate (but related) feeds instead.

The incredibly robust feature set of TweetDeck doesn’t stop there. It’s got integration with TwitPic, URL shortening services, 12seconds video, TweetShrink, TwitScoop and, most recently, Facebook. It’s got everything, but as a result, may look very cluttered and intimidating for users who don’t need all of these features.

Get it at TweetDeck 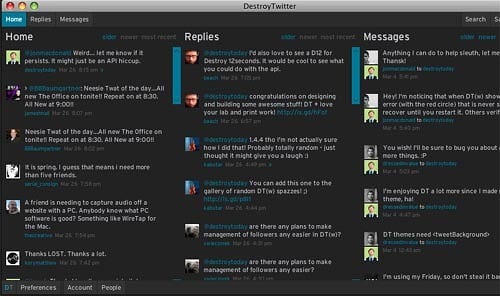 I know. DestroyTwitter has to be one of the strangest names for a Twitter client, because you don’t really want to destroy the microblogging service, do you?

On the surface, DestroyTwitter looks an awful lot like what you’d get with TweetDeck, but the features are not nearly as robust. For example, you’ll find that it does not have any grouping feature to handle your immensely large list of people that you follow. The column-based design is functional and reasonably easy on the eyes.

But that’s looks. In terms of usability, it doesn’t bring enough to the table to trump TweetDeck or Twhirl in my books. It doesn’t have the “groups” feature of TD and it doesn’t do multi-accounts like Twhirl. Future releases may address these shortcomings though.