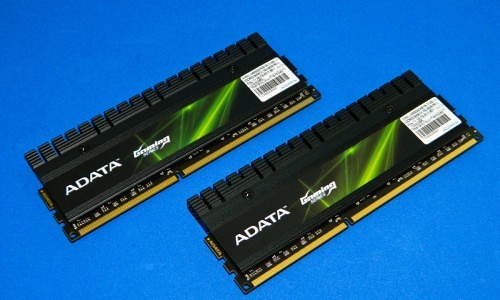 Moving up the frequency list, ADATA’s new Gaming Series v2.0 refreshes the original with new sinks and ICs underneath to appeal to gaming enthusiasts who like showing off their system and overclocking. At 2400MHz, the 2nd Gen Intel processors are finally overclocking those memory controllers. The v2.0 Gaming Series do look better and a bit more serious than previous efforts.

They come in dual channel kits utilizing 1.5 volts at 1600 up to 1.65 volts at 2400MHz as tested. This kit achieves these frequencies with 10-12-12-31 timings which is quite aggressive versus 11-13-13-35 on most kits on the market. Keep in mind these kits can be use lower frequencies with lower, better timings for faster system performance because they use premium ICs.

This dual channel 8GB 2400MHz version 2.0 Gaming Series kit starts at $74.99. However, ADATA also offers a larger dual channel 16GB kit for $144.99 which is as big and fast as it gets. If you need quad channel, you’ll have to drop down in frequency and pick up a second dual channel kit. 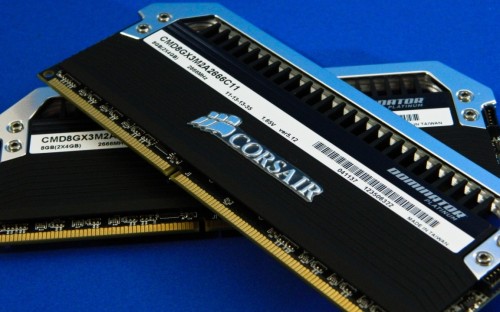 Our final Corsair Dominator kit clocks in at 2666MHz which is now the hairy edge of our Core i7-3770K’s capability. The Dominator Platinum sports a new LED lit chrome arm intended to satisfy enthusiast who like to show off attractive high performance memory. Memory speeds start at 1600MHz and top out at an insane 2800MHz. Capacities range from (2×4) 8GB up to an impressive (4x4GB) 16GB in similar high speeds. Given processor and board limitations, it’s extremely unlikely you’ll achieve these frequencies. But at least the memory won’t be holding you back.

While the 1600MHz kits utilize 1.5 operating volts, the faster kits require 1.65 volts to ensure stability. This particular 8GB 2666MHz kit needs 11-13-13-35 timings which is pretty standard. Again, you can always lower the frequencies and timings for greater system performance.

Surprisingly, the Dominator Platinum 2666MHz 2x4GB kit can be found for $160 US/CA from retailers. If you’re anxious to sport a 4x4GB kit, it’ll cost you a healthy $340 to secure a kit. Keep in mind that even if your system can’t support these frequencies or capacities, you can down clock frequencies and lower memory timings for better performance. 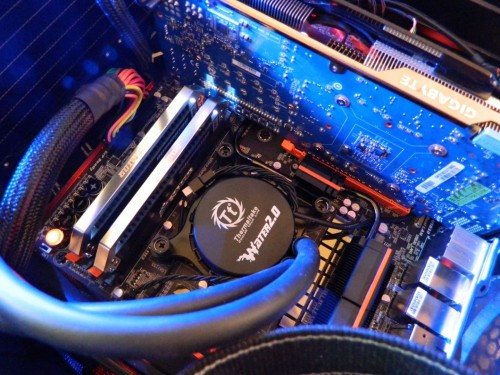 I tested compatibility on several different Z77 motherboards from ASRock, ASUS, GIGABYTE, ECS and MSI. On the average, ASUS motherboards have been a bit more aggressive at ensuring these finicky Ivy Bridge chips max out. It’s the IMC (integrated memory controllers) that are the largest limiting factor when overclocking. Sandy Bridge processors don’t have much problem in this area and completely luck of the draw whether or not your Ivy CPU can support faster than 2400MHz DDR3 memory.

Here’s our system setup for testing…

Worth noting is that I’m using the previous BIOS from the original Viper III review which ensures that the previous scores are valid. Next, let’s touch on the benchmark testing notes before moving on.

Each kit’s stock XMP (extreme memory profile) profile was tested. Keep in mind that not all motherboards will read each XMP memory kit perfectly. Some manual tuning might be necessary. Kits were also overclocked to see which kits had something extra to give.

I also tested each to see if any of the kits were capable of lower frequencies and better timings which can help with extra system performance. Keep in mind, your motherboard and CPU are the two main variables that control memory frequencies. Some CPUs may not be able to achieve faster than 2400MHz.

The benchmark regimen includes Sisoft SANDRA memory bandwidth which tests the maximum amount of data that can be accessed by the processor, Graysky x.264 4.0 which transcodes a 720p video with two passes, and PCMark7 to see what overall affect the faster/lower latency memory has in terms of overall system performance in day to day tasks.

Let’s get on with those benchmarks!