Futurelooks gets a quick look at a product that gives you Hardware RAID 0 – 10 in a 1U enclosure. It’s rack mountable but also comes with accessories that allow you to just stack them on your desktop. It connects via USB 3.0, eSATA and even Firewire 400/800. They call it the RAIDAGE GAGE104U40SL-SAUF and it’s definitely the longest name for a product that we’ve seen yet. Check out our quick look video overview above in glorious 1080p High Definition. You can also watch it on YouTube. 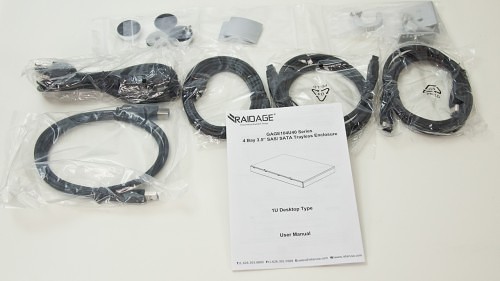 Typically when you purchase a lot of professional enclosures, you get nothing with it except a manual. The RAIDAGE comes with all the cables for every connection that works with it. That means you’ll spend a lot more time working and a lot less time trying to hunt down the right cable to attach it to your workstation. Rack ears are included as well as the guards that double as locking mechanisms for a security bar. It’s also nice that they’ve included both feet and covers for the unused rack mounts so that it’ll look right at home on your desktop. The only sore point is the manual that is fairly basic and only comes in English. 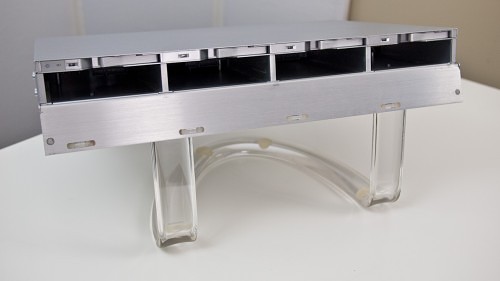 The RAIDAGE GAGE104U40SL-SAUF was dropped into North America as part of a test market of about 100 or so units. But because all of them sold, they are now working on ramping up production to meet demand. The unit is clearly aimed at the professional audio or video editor that needs fast on tap storage that is completely redundant. The 1U form factor makes it a great addition to that mini-rack of equipment under some of those desks. Add to that the easy to swap trayless drive bays, and you’ve got a super easy to configure device that is up and going as soon as the drives come out of the packages.

Pricing was hard to nail down because of the spread of anywhere between $450 – 649US and availability was very scarce. We were finding them at pro-audio and video shops versus the regular NewEgg or NCIX where products like these may live. We have a feeling that this may be where that next shipment is going because we’ve heard that pre-orders are happening from this hot item.

Overall, it’s not exactly cheap, but it is a 1U rack mountable RAID solution that uses a hardware controller inside with components from JMicron and Texas Instruments. They say once you go hardware you never go back, however we’re still trying to get an answer from iStarUSA, RAIDAGE’s parent company, about which model controller is actually inside the unit. We’ll update when we find out. But I think the best part of the unit is the fact that the hardware RAID is self contained, allowing the device to operate at its fastest possible speed, even without an HBA in the host system. As long as USB 3.0 is your fastest connection, you’ll get peak speeds. That’s not to say that Firewire 400/800 and eSATA aren’t acceptable in a pinch.

With some manufacturers going with Thunberbolt support on their motherboards, and of course Apple already all over that connection, we hope to see a new version, with a much shorter name, in the near future.