The new Flip MinoHD (and the new UltraHD, for that matter) comes with image stabilization. So, does it work? In short, yes. Yes, it does. I shot a couple Dot Com Pho episodes with the older UltraHD and older MinoHD, and then I shot a couple more with the new MinoHD. Based on a quick comparison, the latter were much more stable.

For a better test, I attached both the older Flip MinoHD and the newer 2010 version of MinoHD to the passenger headrest in my car using a couple of Joby Gorillapods. You can see the side-by-side comparison in the video above. It’s very noticeable that the older Flip picked up all the little bumps in the road, whereas the newer MinoHD was able to remain relatively stable. It’s like night and day.

You shouldn’t expect it to work miracles, but it will do a good job of minimizing the unstable video that can result from hand shakiness, bumpy roads, and other similar circumstances.

Now that we have side by side video to compare, it does appear that the new Flip MinoHD’s video quality has been tweaked. The picture definitely looks a bit brighter and more realistic due to better color balance. It appears that much of the work is indeed behind the scenes on the MinoHD while still being as easy to use as ever.

A Look at the FlipShare Software 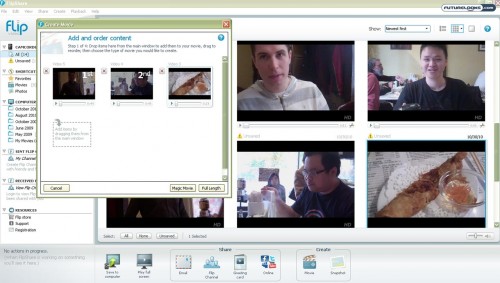 Yes, the software is the same as what you’d be able to get with other pocket camcorders from the Flip range. Even if you buy an older one, you can upgrade to the newest software completely free of charge. Even so, this “free” feature is very much worth mentioning.

No, the included FlipShare software is not going to offer the same level of customization and power as something like Pinnacle Studio HD Ultimate Collection. However, it does offer quite a bit for novices and beginners. It’s even easier to use than Windows Movie Maker and it allows for direct sharing online.

In addition to the video greeting card feature (which actually uploads the video to Cisco’s servers for free online storage), there is an interesting feature called Magic Movie. It’s not as robust as the trailer function in iMovie 11, but it’s similar in that it will extract “interesting” clips from the videos you select and put together a quick compilation complete with transitions. I used it for my Ghost Train video, for instance. 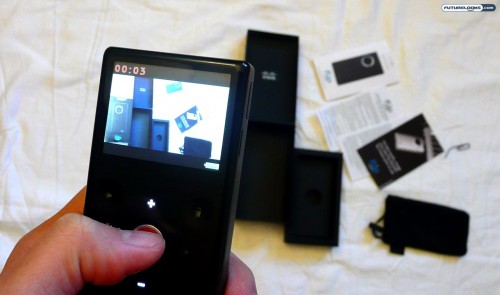 After all is said and done, the 2010 iteration of the Flip MinoHD is still a nice piece of kit. It retains all of the positives of the models that preceded it, while adding in a slick black paint job, and much needed image stabilization. The updated FlipShare software is also more functional and has kept up with the times adding social media to the mix. While this was a great and innovative product before, it’s merely a good and solid product now. Not necessarily a bad thing, but it’s simple formula is easy to replicate.

Today, you can pick up any number of competing pocket camcorders with more features, 1080i recording, and other features that this one does not have. It can’t take photos, for example and other brands are starting to catch on to the easy to use craze created by Flip Video. You might be better off buying a $200 point-and-shoot digital camera that can also do 720p video. Still, none of these types or products make capturing video as fun or easy as the Flip does, which is the primary focus of the line up.

Just like how Cisco’s Valet routers aren’t enterprise class, but you’d be hard pressed to find a more easy router to setup. Taken for what it is, the Flip MinoHD does the job it sets out to do.