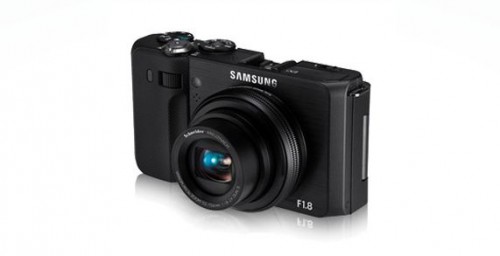 I’m sure I’m not the only photography enthusiast that has run into this problem. It’s nice to always carry a camera around with you but when it is a behemoth like my Canon 1D, slipping it in a pocket isn’t an option and carrying a camera bag around isn’t a much better one in most social settings. So what is a photographer to do when he can’t bring his gear out with him?

So is the Samsung EX1 (aka the TL500) the ideal companion to a giant DSLR for professionals? Is it an ideal device for an entry level photographer looking to for a little more capability from a compact? Let’s find out.

The Samsung EX1 fills the niche known as the “prosumer” camera, the sort of device that professionals will enjoy because it gives them some of the capabilities and flexibility they enjoy with their much larger, more expensive rigs such as a RAW shooting, image stabilization and an aperture that allows for dim lighting. More advanced intermediate photographers look for these sorts of cameras as they give them more options than smaller digital compacts at a price that’s a little easier to swallow than many DSLRs. In fact, I would argue that some higher end prosumer digital compacts are similar or even better equipped than some of the lower end DSLRs that are at roughly the same price point. I mean, an f/1.8 zoom lens will probably cost you quite a bit.

The EX1 is a 10.0 megapixel (3648 x 2736) camera with a built-in 5.2-15.6mm (equivalent to 24-72mm on a 35mm camera) f1.8-2.4 Schneider lens. It’s only a 3x optical zoom but again, the f1.8 aperture isn’t something you regularly find on a compact digital camera. Perhaps even more impressive is the top end is a f2.4, meaning the EX1 will allow you to shoot in low light without using the flash provided that you have a relatively steady hand. Or you could have shaky hands and it might work as well as the EX1 has built-in image stabilization.

The ring around the front of the lens is detachable, revealing a thread that allows for lens accessories including the LWCEX01 Wide Conversion Lens which we will be looking at as well.

Notable features on the front of the camera are a clickable wheel that adjusts shutter speed and exposure compensation as well as a IR receiver beside it for the optional IR remote shutter release.

Along with the dials controlling shooting and shutter modes is a small, built-in flash that pops up at the touch of a switch. 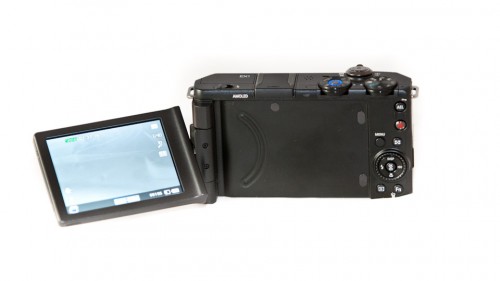 On the back is an articulated, 3.0 inch, 614,00 pixel AMOLED screen, allowing the user to more easily take photos at difficult angles. Unfortunately as with many smaller digital cameras, there’s no traditional viewfinder nor is there a hotshoe EVF option at this time. There are also a number of buttons, dials and switches. The menu is relatively easy to navigate and strangely, you have several different ways to do so as main dial on the back is clickable like a d-pad.

The only blemish on an otherwise solid feature set is that the EX1 only offers VGA video recording while many cameras that cost far less than the $449 US list price have HD video recording. It’s clear that Samsung intended the EX1 to be for photography rather than a crossover product with HD video, which is a niche it shares with only the Canon S90. For most photographers this won’t be a deal breaker but I can see how most consumers will see this as a missing feature.

What’s Included in the Box 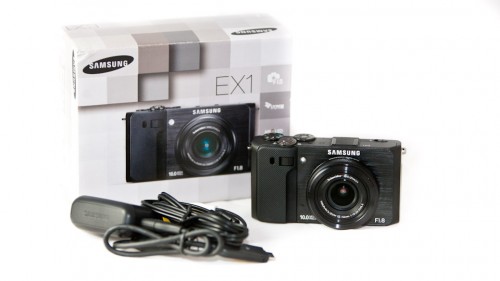 The EX1 comes with few accessories (although there are some available for purchase). The box contains the camera, a camera strap, AV cables and a charger along with the necessary manuals.

Continuing the trend of bringing back old school looks to modern digital cameras, the EX1 is styled to look like classic range finders although it is a tad small to be mistaken for a Leica. The exterior is very clean for the most part and even the busy parts look good. The front, in particular, appears to be brushed aluminum anodized in a jet black while the rest is matte black with some silver accents.

The front rubber grip provides enough traction so the camera is easy to hold which is a good thing as it seems a bit too light for it’s size. People tend to emphasize lightweight materials but in terms of cameras, I prefer them to be heavy enough to feel substantial in your hand. Unfortunately, the EX1 falls into the category of too large to fit comfortably in a pocket but it is small enough to carry around without too much trouble.

Despite being lightweight, the EX1 looks and feels well built. The pieces look well fitted. The LCD screen is thin and swivels but doesn’t feel flimsy. Even the very small flap door that covers the HDMI and battery charging ports opens and shuts with a convincing snap. I still think rubber covers would be more enduring but I understand the aesthetic reasoning.