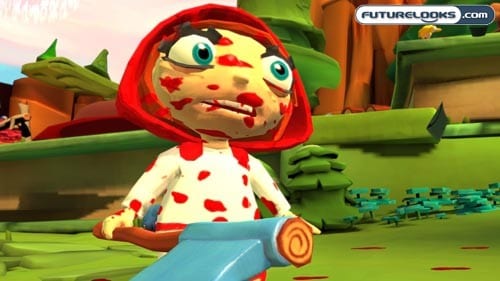 What do you get when you combine your favorite childhood fairy tales with Unreal Engine 3, God of War style melee gameplay, and buckets of volumetric blood?

Coming by way of Playlogic Entertainment, Fairytale Fights is the answer to a question that no one asked. In a nutshell, this action-adventure title for the Xbox 360 and PlayStation 3 takes many classic fairy tales and turns them on their heads. Or rather, it slices off their heads and lets the crimson geyser gush in every which direction. 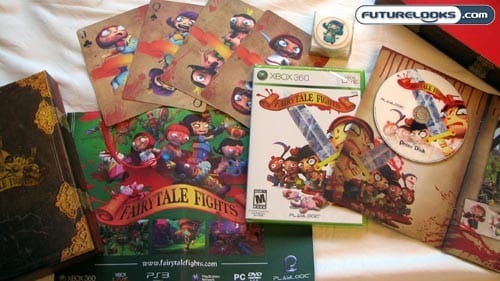 Don’t let the Nintendo Wii-esque graphics lead you astray. Fairytale Fights is anything but a game designed with young children in mind. In fact, it’s rated M for Mature thanks to its over-the-top cartoon violence and intensely exaggerated blood, guts, and gore.

The special reviewers’ copy of Fairytale Fights came in a tome-like box, packing in a special reviewers’ guide, some creatively-designed playing cards, a poster, a pack of sugar discs, and the game itself. You think that you’re cracking into a classic by Hans Christian Andersen, but you’re treated to decapitated heads and severed limbs instead.

Get Ready for a Bloodbath 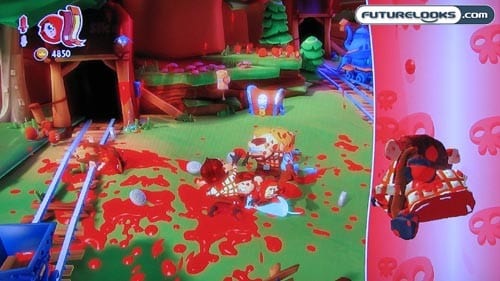 Utilizing a creative application of the Unreal Engine, Fairytale Fights takes on the appearance of a standard 3D action-adventure title. The exact mechanics are similar to most 3D platformers, getting you to explore worlds and beat the tar out of your enemies. The difference is that you’re playing as Little Red Riding Hood.

The control scheme is an interesting one. While you use the left analog stick for movement and the “A” button to jump, you actually perform all of your attacks using the right analog stick. The kicker is that the direction you move the right stick is the direction that your character will swipe. Move from left to right and Lil Red may slice a lumberjack in two. Playlogic calls this “dynamic slicing technology” and it’s arguably more violent than any Aliens vs. Predator or Halo title.

The other big selling point here is what the developers call the “volumetric liquid system.” When you hack and slash your way through your enemies, their blood will gush and spill into the landscape. The drenched surroundings actually make for pools of blood and your character will slide across these pools as if he or she were ice skating.

Play with the Naked Emperor… What? 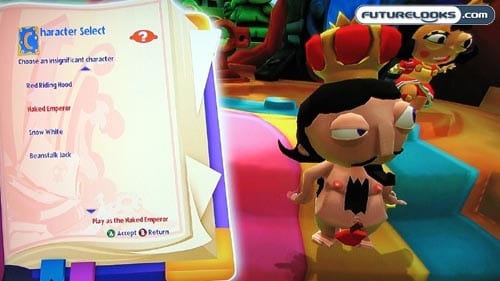 There are four main playable characters in this game. It seems that the main protagonist is the aforementioned Little Red Riding Hood, but you can easily swap on over to Snow White, Jack (from Beanstalk fame), and the Naked Emperor (from New Clothes fame). Thankfully, he has a strategically placed leaf to cover his twigs and berries.