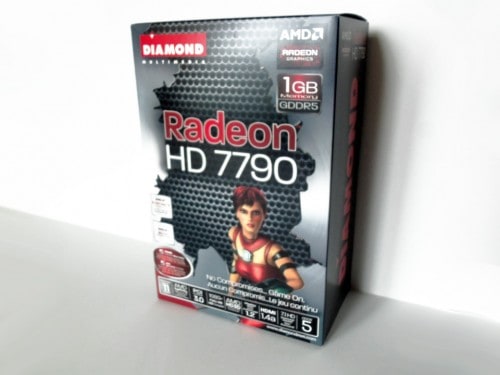 The graphics card is like the front man of your PC band as it often attracts the most attention. It is the first thing you list as the difference between a regular PC and a gaming PC. Diamond Multimedia, the company that brought our own front man, Stephen Fung to custom PCs, was nice enough to send us their Diamond Radeon HD 7790 1GB.(7790PE51G). We are going to put the Diamond HD 7790 on stage, put a spotlight on it, and see if the pressure can bring out a “Monster3D” performance. 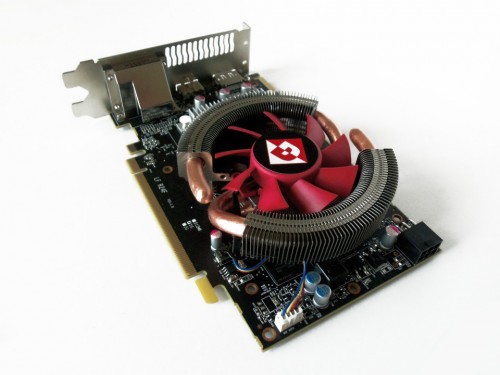 The Diamond Radeon HD 7790 1 GB (7790PE51G) is a custom all black PCB card with a custom cooler. The first thing you notice about this card is that it is very short coming in at only 12 inches long (304.8 mm). While compact in length, the HD 7790 is still a dual slot card with one DVI-D, one DVI-I, one DisplayPort, and one HDMI output. This card size fits perfectly in most SFF (Small Form Factor) cases thanks to its short stature.

Unique to the Diamond HD 7790 is the custom single fan cooling solution. The copper heatsink is connected to two massive cooling pipes in a circular coiled form. There are a number of aluminum fins attached to the cooling pipes to help with heat distribution. The back dual-slot plate also has some vertical cutouts to assist with getting heat out of your PC case.

What’s in the Box 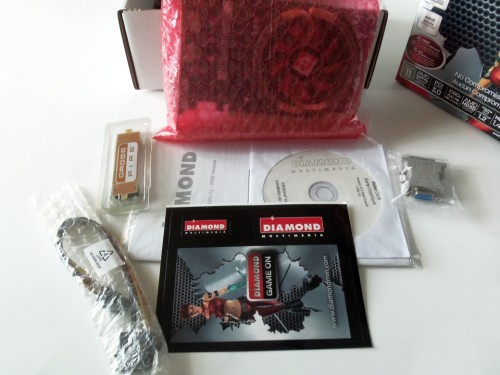 The accessory package here is exactly what I like to see as the include items and helps expand the versatility of the card. You get the user manual, a DVI-to-VGA adapter, 4-pin molex to 6-pin PCIe adapter, Crossfire Bridge, and installation CD. This is great bundle for those who are looking to squeeze a little life out of an older system without having to purchase the bits to do it.

To give the HD 7790 the best possible chance at showing what it can do, I once again use my best AMD equipment. Testing for other graphics cards were redone with the new testing software and selected games to minimize any variables. The HD 7790 was tested with default clock speed of 1175 MHz and memory at 1550 MHz. I overclocked the HD 7790 to the maximum allowed speed within AMD’s Catalyst Control Centre which is a core clock of 1200 MHz and memory speed of 1600 MHz.

Jekyll and Hyde Monster3D and What’s the Frequency Kenneth?

If you have read reviews here before you noticed I did not talk about the clock speed of the Diamond Radeon HD 7790 1GB in its features and specifications. This is because I honestly don’t know what the actual clock speed of the card should be. We know that sounds strange so let me explain.

If you go to Diamond Multimedia product page you will see the listed speed as Core/Memory: 1075/1550 MHz. However, if you check any retailer who sells this card the speed will be listed as Core: 1175 MHz and memory speed anywhere from 1500 MHz to 1575 MHz. I originally thought it was a fluke, but not a single retailer I could find had the specs listed on Diamond Multimedia’s site. This is something Diamond needs to get under control to ensure what you as a customer are buying what is truly being advertised.

To quickly answer questions you are asking yourself right now, the package box has no detailed specs and the speed once installed was Core/Memory: 1175 MHz/1550 MHz. We wish we could say the story ended here, but unfortunately the graphics card doesn’t know what its clock speed is supposed to be either. While idle, the card would change the core speed randomly and switch the memory from idle to full speed. Once the sporadic clock changes started, the HD 7790 would not maintain full speed during continued usage. Restarting the PC was often the only way to stop this behavior. 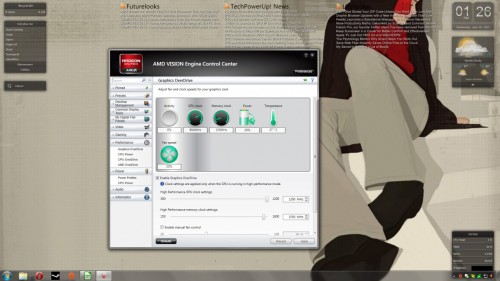 Diamond Multimedia did respond to our issues quickly and did provide a solution of sorts. They provided me with a graphics card BIOS flash program which did stop the sporadic changes in clock speed. However it was neither a permanent solution and actually raised more questions. The default clock speeds of the card once flashed with Diamond’s program are now core/memory: 1030/1500 MHz.

We thank the rep with Diamond who provided us the BIOS flash as it stabilized the HD 7790 long enough for us to conclude testing at the specifications listed on e-tailer sites. We selected those specs as they are the ones 99% of buyers will be basing their purchasing decisions on. It also helped find a possible cause of the sporadic clock speed changes.