Where Did These Speeds Come From?

As you may know, a graphics card has 3 different operational clock speeds (excluding boost speeds) idle, Full speed, and GPU acceleration. Idle is minimal speed to save power, full speed is the spec we all see, and a middle speed used for multimedia programs with GPU acceleration that don’t need full operational power. The third one seems to be issue as the sporadic behavior would begin whenever I watched something with VLC or visited a site with GPU accelerated features. 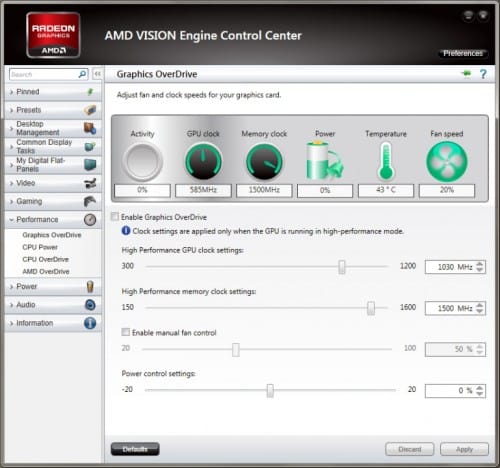 We attempted to go further by testing to see if the behavioral issues can be caused on purpose, with mixed results. While we could cause the Diamond HD 7790 to start behaving sporadically at will, there is no control over results. Sometimes it would lock at idle. Sometimes the speed would bounce around wildly. Other times it would behave normally and then 5 minutes into a game drop down to near idle speeds. The whole experience was discouraging and time-consuming.

We did string together enough periods of normal behavior for performance testing to be completed. The Diamond HD 7790 even hit the ceiling allowed by AMD CCC at 1200 MHz core and 1600 MHz memory with no voltage changes at all. So lets move on and see what this card can do when it is working as expected.

We are going to do something a little different this time and start with real world performance. The Diamond HD 7790 has 40% more shaders, but the same number of ROPs as the AMD HD 7770 which is the card it displaced. While I don’t expect 40% improvement, there should be a distinct difference in performance. Lets dive right en with Battlefield 3 at 1920 x 1080 with Highest setting, HBAO = ON, No Blur, 4x AA and 8x AF. 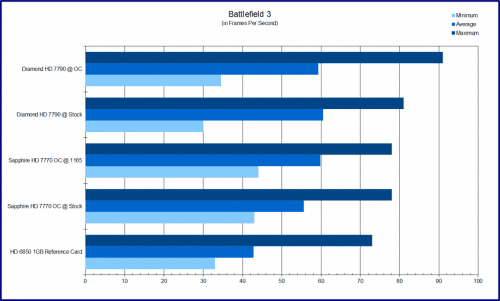 At stock speeds, the Diamond HD 7790 1 GB is just beyond what an overclocked HD 7770 can do. In addition there is a tangible difference as there are fewer freezes, stutters, and frame rate drops with the HD 7790. Overclocking did not change the experience in game. The gain of 8.3% is not bad, but I can’t help but think the 16 ROPs is holding the card back some. Lets keep looking as this could just be this game’s performance.

Lets move right into another high-profile title released recently with Metro: Last Light. This game is more demanding than Battlefield and we selected settings that felt like they were right on the edge of playable. Screen resolution at 1920 x 1080 with High Quality, Low Motion Blur (cannot be disabled), Normal Tessellation, 4x AF, and SSAO enabled. 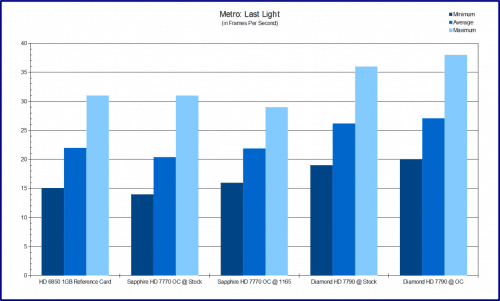 This time we get a distinct performance improvement over the competition in every area. Minimum, Average, and Maximum frame rates go up around 13.6%. Overclock did gain some more ground, but not much which is mainly due to the limitation set in CCC as I believe this card is capable of going much higher.

In our final real world test, we will see how much those extra 256 shaders count when not being used for gaming. This time we took a 720p H.264 video 5 minutes in length and converted it to iPhone 4 format. 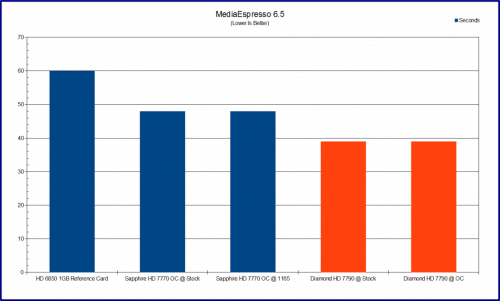 Once again the difference between the HD 7770 and the Diamond HD 7790 is very noticeable, bringing down the time to convert from 48 seconds to 39 seconds. The rather old HD 6850 just isn’t able to leverage its 960 shaders nearly as well. Lets move it synthetic testing and see how the card will perform in all other scenarios.

Next up is OpenGL which has recently been building up to make a comeback with new-found support for OpenCL. We will be moving to OpenCL testing soon, so this may be the last time you see the OpenGL portion of Cinebench 11.5. This is a straight forward test of how well the Diamond HD 7790 handles OpenGL. 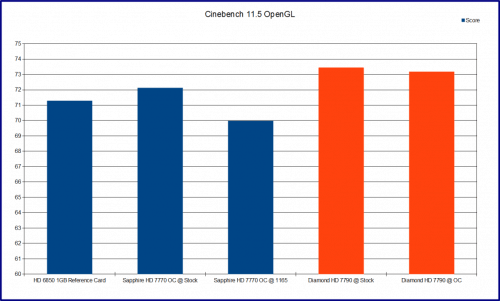 There is a distinct advantage here for the HD 7790, but not much of one. There is a 3.6 FPS increase that puts it above all others in this performance test. Overclocking the HD 7790 actually lowers performance by less than a frame per second, but this is within the margin of error so we can say it made no difference. 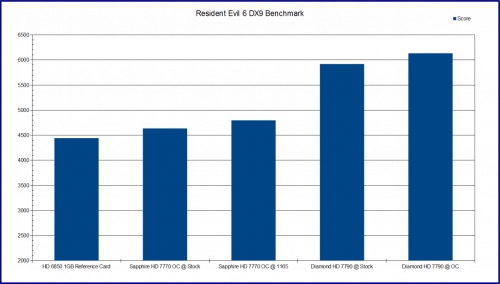 This time we get very nice gains with a 26.8% improvement over the HD 7770 at stock. Overclocking both cards actually yielded very similar results leaving the difference about the same. This is a nice gain, but will not help as most DX9 titles can be run with just an APU at decent settings. It also does show the Diamond 7790 1 GB is capable of putting a lot of distance between itself and the HD 7770.

Let’s take out some of the more traditional synthetic tests like 3DMark and Heaven next!