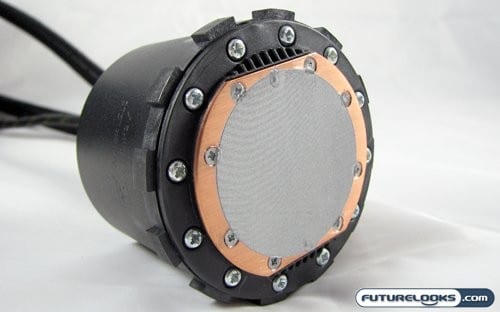 The waterblock used in the H50 is an all copper custom affair. Corsair pre-applies it’s own thermal interface material, and though it looks similar to the decent goop we’ve reviewed, I’m not sure of it’s origins. Luckily you can easily scrape it off if you have a particular thermal paste preference, or leave it on and go for the easy install. The surface underneath is typical for this type of product; machined and clean but not quite the mirror finish you want for good contact and thermal transfer. 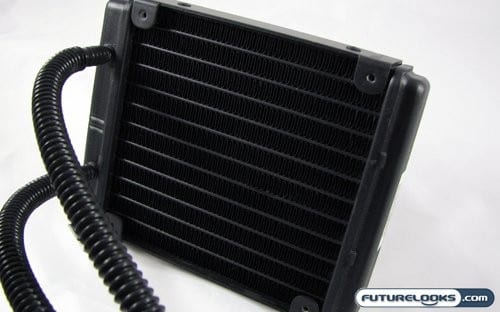 The radiator used on the H50 is a fairly typical 120mm unit. The fins are abundant and appear to be made of aluminum. The radiator itself isn’t very thick, going to economy of space rather then maximum cooling area. There are fan holes on both sides so you could configure this unit in a push-pull setup, providing you had another fan and the appropriate screws. I’d imagine the latter would be more difficult to find then the former. 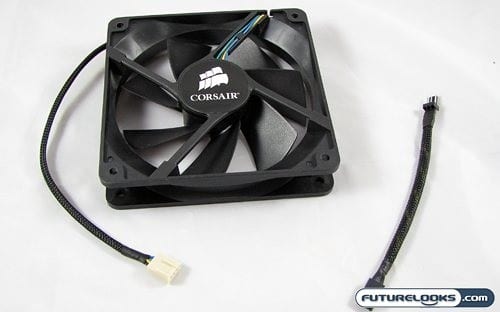 As for the fan that Corsair includes, it’s of the low speed variety. For power it uses the same 4-pin PWM connector you’d find on a modern CPU heatsink. This allows the motherboard to control the speed of the fan, based on the amount of load on the CPU and how much heat it’s generating. An adaptor is provided to power the fan using the standard 3-pin header, should your motherboard not have a PWM header (really?). If you just want to run the fan at full speed, you can take this a step further and use a 3-pin to Molex adaptor to run the fan off the power supply.

Luckily the fan isn’t permanently mounted to the radiator, making it much easier to replace then some kits. This means if you want to hook up a different fan for more cooling performance, you can. Just make sure the fan is only 25mm in depth. The 38mm deep 120mm fans (like my Panaflo high speed monster) are too deep to allow the mounting screws to connect to the radiator. 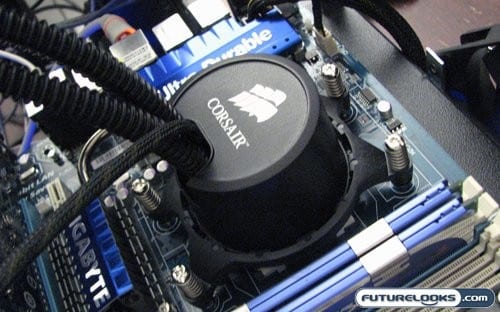 To test the Corsair Hydro Series H50 I installed it on my standard test rig.

If you’ll remember from our review, the Phenom II X4 965 has a TDP rating of 140W. That means it gets friggin’ hot. I figured this was the best stress test for the H50, as it’s currently the hottest CPU available from either AMD or Intel. We used OCCT to take the CPU temperature after 30 minutes of idling, and then after 1 hour of continuous 100% load. The fan was hooked up to the PWM header on the board to match the variable-speed fan controller on the CoolIT Domino.