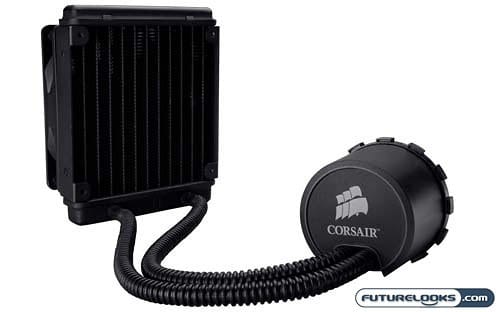 Water cooling still manages to give the heebie-jeebies to even the most seasoned of enthusiasts. The relative difficulty of setup, maintenance requirements, and overall costs are still off putting factors to even those used to overclocking their CPU to the breaking point. Although fairly benign with modern coolants, cooking those components in a pool of spilled coolant if something should go wrong just isn’t an appealing proposition. Now one can have their CPU water cooled without any of the work or worry, for less cost then most high end motherboards.

Corsair isn’t new to this game; their Nautilus 500 system really got the ball rolling on this concept. However that kit was bulky, sat outside the case, and had a couple minor fit-and-finish issues. Also the price still wasn’t in that magical sub-$100 range. Corsair’s latest product looks to take that extra step forward with what they started with the Nautilus 500. What they came up with was the Hydro Series H50 high-performance CPU cooler.

Here’s a quick run down of the specs, or you can check out the product home page for all the nerdly specifications.

Basically this all-in-one kit is reminiscent of the CoolIT Domino we reviewed nearly a year ago. It’s an enclosed water cooling kit with a block for the CPU and a 120mm fan to keep the radiator cool. All of this is contained within the computer case.

Unlike the CoolIT Domino, the design is a little different. There’s no side panel, and no LCD display. On the bright side you can pick any 120mm you want, though one is included.

What Else is Included? 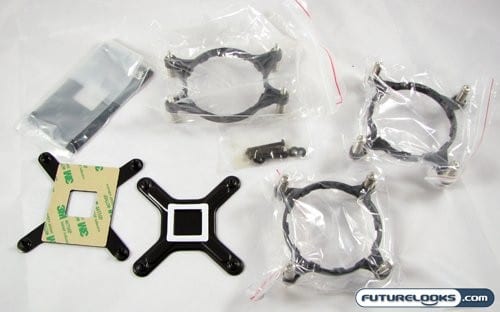 Corsair includes everything you need to mount the H50 in an Intel based rig. Out of the box, the cooler supports both LGA775 and LGA1366, complete with corresponding back plates. Now the picture above also shows the AMD mounting bracket and back plate. Unfortunately those aren’t included in the retail kit, needing to be ordered separately.

They are said to be free, but reports say that there’s a $5 USD handling fee of some sort. This of course requires you to plan ahead when purchasing this kit  for and AMD rig, as you’ll need to order the separate compatible bracket ahead of time to make sure you have it ready to go. This is a fairly decent inconvenience for the AMD crowd, small though they may be.

The Heart of the Hydro Series H50 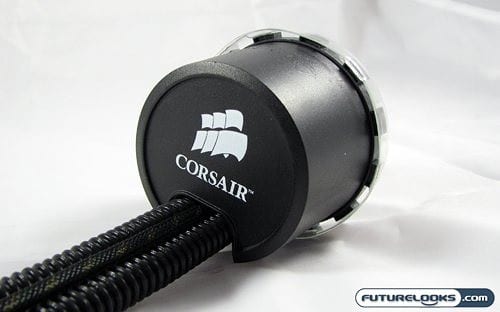 As noted, the Corsair Hydro Series H50 is a completely self contained water cooling unit. Actually it takes up less space then the CoolIT Domino, since it forgoes the side mounted LCD panel. Also helping out is the fact that the CPU waterblock and pump are all contained in the unit that mounts to the CPU socket. Aside from the fan that eventually mounts to the radiator, most of the mechanics for the device are found in this unit. The pump itself is actually powered by a three-pin power adaptor, and if plugged into your motherboard will give you a flow reading using the RPM monitor.