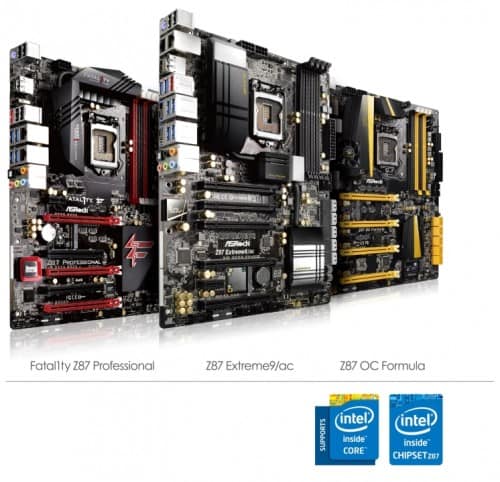 COMPUTEX 2013 starts on June 4th and everyone is eager to see all the new technology for this year. ASRock plans to show off more than just motherboards for Intel Haswell processors. They’ve got new A-Style and M8 mini-PCs designed in collaboration with BMW too!

While ASRock is doing more this year, they still have a new line up of motherboards for the Z87 chipset. These include the Extreme6, Extreme9, Extreme11, and Fatal1ty boards, with the latter being the flagship of the line-up. All of these boards will feature the A-Style which we showed you in a previous post here.

The ASRock Z87 motherboards will also feature Pure SoundTM via Realtek ALC1150 codec plus two TI 5532 Amplifers (one for on-board codec, and one for headphones up to 600 ohms). This is in addition to HDMI-In, Home Cloud software, and support for 802.11ac WiFi which will all be demostrated at their both during COMPUTEX. This is on top of the already demonstrated “Conformal Coating” that makes their boards water resistant. 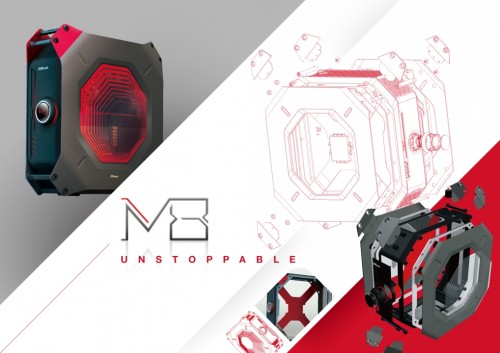 ASRock will also be introducing a new product called the M8 mini-PC. Choosing to be tight lipped about specs, ASRock so far has only revealed that the audio is run by a Creative SoundCore 3D quad-core processor supporting SBX Pro Studio, Crystal Voice, Scout Mode, and EAX 1.0-5.0. The M8 will also have 802.11ac (up to 867 Mbps), Bluetooth 4.0, and A-Command software for real-time system monitoring.

There seems to be a lot planned by ASRock for COMPUTEX 2013 and I can’t wait to get more details than just what they’ve teased us with below. It seems the company is the way to clawing  its way up to a top-tier in motherboards and doesn’t plan on going anywhere but up.

May 30, 2013 – Every year, loyal computer aficionados, tech addicts and innovative manufacturers hold a special reunion at the Mecca of computer science, COMPUTEX TAIPEI. If you were still wishy-washy about whether this year’s show would be worth the tickets or not, you can be absolutely positive that this party is going to rock very hard, because ASRock isn’t going to miss it for the world! The young and vibrant company is well prepared for COMPUTEX TAIPEI 2013, which is going to take place during June 4TH till 8TH at ASRock’s Booth M0311, 4F, Taipei World Trade Center, Nangang Exhibition Hall. With four different types of quality products lined up, including the longly anticipated Intel 8 Series motherboards, the better improved industrial personal computers, new server systems with revolutionary designs, and the exciting collaboration with BMW Group DesignworksUSA to create the ultimate gaming rig – M8.

Following the company’s tactics from last year, the new wave of Intel 8 Series motherboards will be diversified towards three distinctive targets of interest. The prestigious Extreme Series motherboards will reveal its mystique hue of silver and gold shining between the dark PCB, along with ASRock’s ground breaking collection of lifestyle based features A-Style. Features include Purity SoundTM, by Realtek’s ALC1150 audio codec that supports 115dB SNR DAC, and two TI® 5532 amplifiers, one is a Differential Amplifier and the other one is a Premium Headset Amplifier which supports up to 600 ohm headphones. And there’s also cap less Direct Drive technology, EMI shielding cover, PCB isolate shielding and support for DTS Connect; HDMI-In for instant monitor swapping between the computer and secondary devices; 802.11ac WiFi for up to 867Mbps data transferring speeds; Conformal Coating for protecting the motherboard against conductive liquids, corrosion, dust and extreme temperatures; and Home Cloud for remotely waking and controlling computers! For live demo, a Z87 Extreme11/ac will be set up to display its incredible storage capability by supporting up to 22 solid state drives, 6 from the Z87 chip and the other 16 from the LSI SAS3 chips, moreover the solid state drives will be built into a monstrous RAID 0 array via the SAS3 ports. Another batter up will be will be a Z87 Extreme9/ac running 4-Way SLI while connected to multiple Thunderbolt devices. And then for the finale, a Z87 Extreme6/ac to perform to the audience its onboard 4K display and ASRock’s Purity SoundTM.

Meanwhile, Nick Shih’s fast and furious OC Formula Series motherboards will wear its typical yellow and black speedsuit, plus an invisible layer of Conformal Coating. In addition, the former Power Kits, Connector Kits and Cooling Kits are also joined by a new member, the Monitor Kit’s Status OLED. The Status OLED shows various information of the system on a new high resolution OLED screen, and also allows users to toggle between information of the power on self test, debug codes, the current time, temperatures, frequencies and voltages of various points on the motherboard.

Lastly, the trustworthy Fatal1ty Series motherboards shall be coated in raging red, and receive numerous hardware perks with the code name Gaming Armor, designed for improving the system’s performance and stability when gaming. To be more specific, the Gaming Armor will enhance the motherboard’s CPU power connectors, PCIe slots, LAN connection, heat dissipation and onboard audio. Besides improving the hardware, ASRock is also releasing a useful utility for gamers named Key master, which contains two major features, Sniper Key and Macro Key. It enhances your mouse and keyboard with customizable macros, sniper modes, key repeat rates and repeat delay, thus turning your Fatal1ty motherboard into an all rounder gaming rig. And the list goes on! ASRock is also giving away $24.95 worth XSplit three month premium licenses for free with each Fatal1ty motherboard!

Another spotlight on this year’s COMPUTEX TAIPEI 2013 will be M8, the masterpiece of ASRock and BMW Group DesignworksUSA. In case you don’t know how good M8 looks like yet, the stylish and streamlined design using anodized aluminum and steel makes it an eye catcher without doubt. Whereas the side of the case is partially transparent, so that the motherboard and its components are ambiguously visible, adding a sense of mystery. Au contraire, the functionality of this gaming beast also lives up to its awesome appearances. For example, A-Command with G-Sensor adds more convenience with its OLED display for users to tune or check the system’s stats without connecting an additional monitor. 2T2R 802.11ac WiFi module and Bluetooth v4.0 provides up to 867Mbps blistering fast wireless Internet connections. And the Creative SoundCore 3D quad core processor supports SBX Pro Studio, Crystal Voice, Scout Mode, EAX 1.0-5.0, etc, for unbelievably realistic audio effects.

“M8 is a new page of gaming! Gamers should be able to feel anticipation the moment as they power on their computing rig, just as a racer feels the adrenalin rush as he makes his engine roar.” Proudly announced James Lee, V.P of ASRock Sales and Marketing.

“Our goal was to create desirability and iconic differentiation in a small Gaming-PC,” said Sonja Schiefer, Director, Munich Studio, BMW Group DesignworksUSA. “We created a design language focused on superlative and a design solution that is very much an exaggerated mode of expression.”

Come join COMPUTEX TAIPEI 2013 to check out the latest trends of the tech world. Stay tuned for eye popping new products, mind blowing live demos and a lot more hidden surprises at ASRock’s Booth at m0311, 4F, Taipei World Trade Center, Nangang Exhibition hall during June 4TH till 8TH. ASRock is dedicated to entertain and present you with computing technologies at its best, you will not be disappointed!