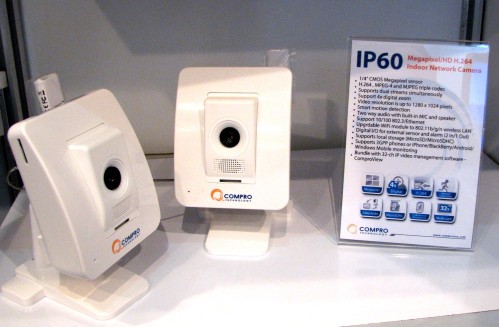 Representing the networking-oriented side of things over at this year’s COMPUTEX Taipei 2010, I paid a visit to the fine folks at Compro Technology and Thecus to see what new goodies they had in store for the world. Let’s have a look at what I found. 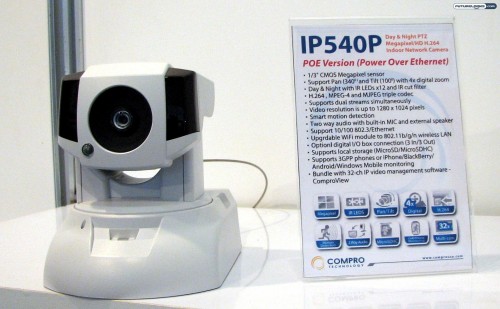 The idea of having a webcam is anything but new. You can use just about any webcam to participate in video chats and take random pictures for DailyBooth, but what if you want more functionality than that? That’s where an IP camera comes into play.

A big part of Compro’s business is precisely in this realm. I was shown no fewer than six different units as part of Compro’s lineup. Some were fixed in scope, like the IP60 shown at the top of this article; others could move around either by manual control or automatically, like the IP540P shown here.

With the IP540P, you get 340-degree pan and 100-degree tilt, along with 4x digital zoom, IR LEDs for night use, video resolution up to 1280 x 1024 pixels, two-way audio, an optional WiFi module, and local storage support.

Checking Out the Software Side

The hardware side of the IP camera equation is one thing, but the hardware doesn’t matter that much if the software isn’t up to snuff. Compro is taking care of that too with its ComproView video management software.

Using this software, you can manage multiple video streams from multiple cameras, making it great for surveillance over a large area that cannot be seen from a single vantage point. The software also allows you to control the movement of cameras that support it. This way, you can pan, scan, and zoom at will.

You’ll also notice various other buttons to adjust the brightness, microphone volume, and speaker volume, as well as take snapshots and record the video input.

Panning and Scanning to an Open Door 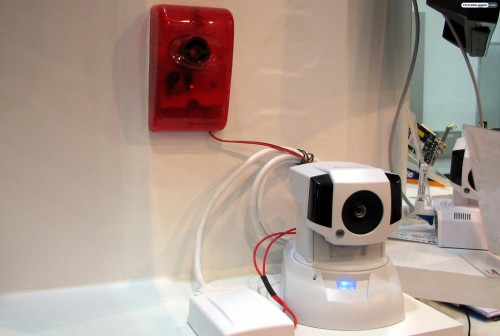 There was one demo set up that showed off an even more interesting feature. When used with the compatible door module, you can set up the camera to automatically pan over to point at that door when it is opened.

The battery for door module is standard and should last for up to six months at a time. This can be a great solution for home security, for instance, as well as in a more corporate or enterprise application.