We’ve already made an announcement of ASUS adding to their Strix line of performance cards, but we couldn’t resist using the headline again. This time, ASUS is adding a version of the tried and tested NVIDIA GeForce GTX 980 Ti to that same Strix video card line.

As we’ve already established, the Strix line is a bit of special sauce. This of course means that this isn’t any run of the mill GTX 980 Ti unit. The Strix GTX 980 Ti is clocked at 1291MHz in OC mode and 1317MHz in Boost mode. ASUS claims this will provide 24% faster gaming performance in The Witcher 3. Other features of note is the huge chunk of GDDR5 that ASUS has soldered on-board. Strix GTX 980 Ti rings in at a hefty 6GB of RAM. 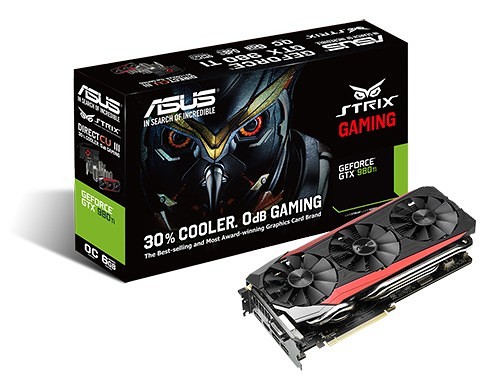 Keeping this GPU cool is a DirectCU III cooling setup, the same as what’s seen on the top end AMD card. The card also features a Strix LED light setup that’ll add pulsating atmospheric lighting to your PC interior. The cooling will be most helpful, as this card can still be pushed even further using the included ASUS GPU Tweak II to overclock it. This extra performance can be put to its most efficient use with the Gaming Booster function, which “maximizes system performance by removing redundant processes and allocating all available resources automatically.”

These cards should be available now from your favourite PC parts retailer. You can check out the press release below for more info.

Powered by the latest GeForce® GTX™ 980 Ti graphics-processing units (GPUs), the Strix GTX 980 Ti features GPU boost clock speeds of up to 1291MHz in gaming mode and 1317MHz in OC mode, delivering up to 24% faster gaming performance than reference cards in The Witcher® 3. It is packed with exclusive ASUS technologies, including DirectCU III with a patented triple wing-blade 0dB fan designed to deliver maximum airflow for cooler and quieter performance.

Improved overclocking and stability: This new manufacturing process allows us to eliminate through-hole components from manufacturing – freeing up space to utilize POSCAP decoupling capacitors, for extended lifespan and improved stability.

Painless installation: The absence of through-hole components also makes installation painless for the consumer, as there are no sharp protrusions at the rear of the card.

No dust build up: Auto-Extreme technology, negates the need for flux and harsh cleaning chemicals during manufacturing, so there is no sticky flux residue on the graphics card – this helps prevent dust buildup and oxidization on the PCB when the cards is installed in a PC case.

Complementing its amazing reliability, the Strix GTX 980 Ti is built to be incredibly tough. It comes with a GPU-fortifier and strengthened backplate that provides GPU protection and also prevents the PCB bending over time.

The final must-have flourish for Strix GTX 980 Ti is the Strix LED that lends a style statement to any system, with pulsating light effects.

Availability & Pricing
ASUS Strix GTX 980 Ti will be available soon at ASUS authorized resellers with an MSRP of $679.99.

* Specifications, content and product availability are all subject to change without notice and may differ from country to country. Actual performance may vary depending on applications, usage, environment and other factors. Full specifications are available at http://www.asus.com