Search
Home
Miscellaneous
Prev3 of 4Next 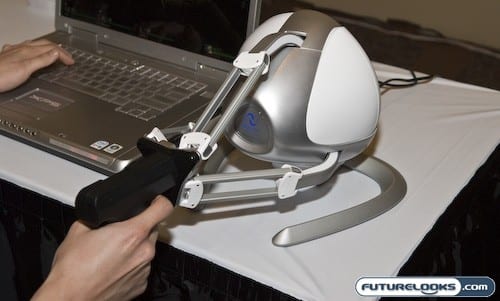 Although the mouse is the weapon of choice for most FPS shooter fans, Novint has decided that there’s nothing better than the handle of a pistol and a little recoil to make things interesting. The Novint Falcon has been shipping for a while now and seems to be catching on, offering a much more realistic gaming experience by allowing users to feel the game. 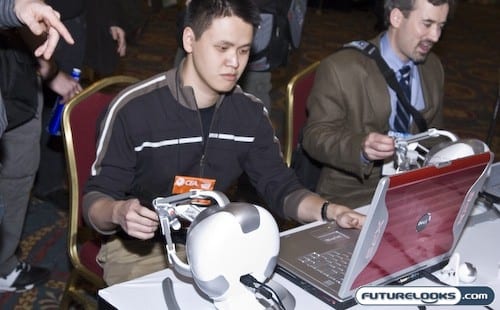 The only things that we found a little annoying were the fact that the recoil would throw off our aim and zombies would try to grab our gun. The only other thing that we found a little annoying was that it could get tiring holding up that gun during long zombie blasting session. I really needed somewhere to rest my elbow, but it only added to the realism of holding a real gun. I was in for a serious gaming session, but my neighbor seemed to be enjoying himself a lot more than I was. However, I was smiling on the inside.

I Could Probably Use One of These

After a long day of roaming around on the Las Vegas Strip, your feet can quite tired, especially if you’re carrying around a bag or two. Believe me, I would know. This is also true of you’ve had a particularly stressful day at work or you’re trying to recover from a crazy nature hike. That’s when you need a massive massage chair, like these ones from Inada. 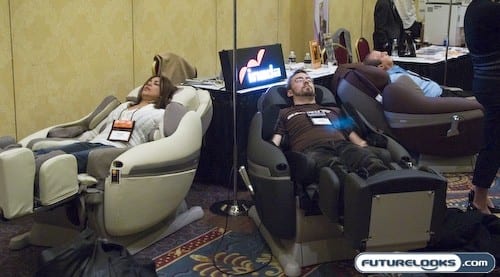 I don’t think I’d be able to play Rock Band 2 while sitting in this chair, but I’ll certainly be a lot more relaxed. Just look at the faces on these people. It’s not just massaging their back, since it’s got those leg massaging parts too. It’s almost like it’s straight out of Star Trek.

The Consumer Electronics Show in Las Vegas, as I’ve mentioned, brings a huge variety of technology that fits anywhere within the realm of consumer electronics. You’ll find everything from rechargeable batteries to massive HDTVs, but you can also come across massage chairs too.

I wonder if they’d be willing to send me a review sample. I could use one of these chairs.

We’ll be heading to Digital Experience tonight, another gadget and gizmo smorgasboard. Stay tuned for more CES 2009 Coverage this week as we work on rolling it out. More pictures are on the next page.