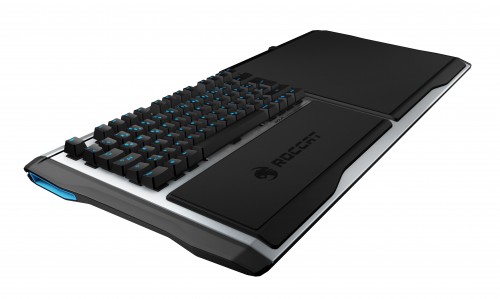 The biggest limiting factor to a good PC gaming experience in the living room is maintaining the comfort of a living room while still being able to have an optimal PC setup. That usually meant mouse/keyboard use was out the window. Even the games you could play would be limited due to not wanting an excessively loud PC breaking the quiet of your living room. The announcement coming from ROCCAT at this year’s E3 event addresses the former of those two problems with unveiling of the Sova wireless keyboard and mouse-pad.

The Sova wireless keyboard and mouse-pad is basically the final piece of the PC gaming puzzle, providing you with a full KBAM setup in your living room. The keyboard itself is a nice solid piece, surrounded by brushed aluminium, but it’s what is attached to the keyboard that is of particular interest. The unit has multiple USB ports, allowing you to hook up any mouse you want. Also the mouse pad slides and is quite adjustable, allowing the user to find the most comfortable position for continuous gaming. This unit will also go the distance in battery life, with ROCCAT claiming it’ll last up to 12 hours on a single charge.

The product shown at E3 is just a prototype, so there isn’t any pricing or availability info yet. You can still check out the full press release on the Sova below though, all the while imagining the ability to play 3D shooters on your TV in the one and only way they were meant to be played.

Prototype of ROCCAT’s Sova on display during E3 at South Hall, Alienware Booth 1047

“Sova is the option for gamers wishing to expand their arena without sacrificing gaming experience,” says René Korte, ROCCAT founder and CEO. “Platforms like Steam are fantastic, but the experience can be devalued by the lack of adequate gaming equipment. Gamers who wish to stream PC games to a living room television will no longer need to put up with latency issues and can now experience couch gaming at its fullest.”

ROCCAT’s Sova utilizes a highly modular design with flexible and adjustable parts that adapts to individual gaming preferences. It sports multiple USB ports and can be used with any mouse, including the newly unveiled Tyon with 16 different programmable buttons.

“Gaming is a not a one size fits all concept and everybody has a particular set of tools, such as their favorite mouse,” adds Rene. “PC gamers use an increasing number of peripherals such as second-screen options and apps like ROCCAT’s Power-Grid to bolster their gaming experience, and the Sova gives gamers that ability away from the desktop.”

The Sova is comprised of durable yet lightweight machined brush aluminum, giving it a solid feel. Designed and perfected by gamers, it features a strong battery life for up to 12 hours of gameplay, a sliding mousepad that extends and retracts based on personal preference, padded leg rests to ensure comfort, and an ergonomic palm rest for hours of comfortable continuous play.

“The Sova was based on hundreds of hours of conceptualization, design refinement and testing,” concludes Rene. “It is a new instrument that gives gamers the freedom to play anywhere they wish. PC Gamers will no longer be relegated to a desktop or laptop and can bring PC gaming into the living room or man cave.”