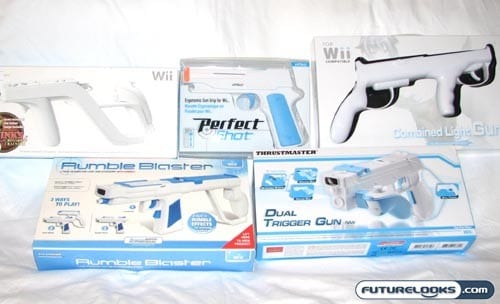 In case you haven’t already noticed, there are a lot of Nintendo Wii accessories out there for you to enjoy. Even if you decide that you really want to have a Wii zapper of some kind, you’ll find that you’ll be bombarded by a myriad of choices as well. Which Wii blaster is the best?

While this guide isn’t exhaustive (there are far too many Wii zapper options to list them all), we did aim to give you a good overview of what is available when it comes to the gun attachments on the Nintendo Wii. By using one of these fun accessories, you just may get your girlfriend into gaming after all. Oh yes, she’ll love blasting the bad guys. 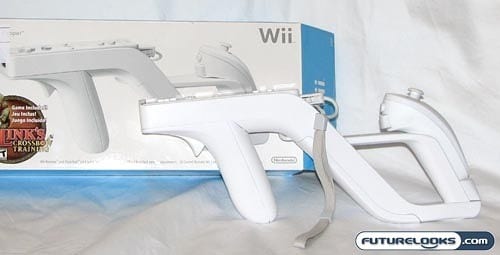 I suppose it makes the most sense to start with the original. The first official gun attachment to hit the Nintendo Wii came from Nintendo itself. Known simply as the Wii Zapper, this is a single unified plastic shell that provides you with a “Tommy gun”-like experience on the Wii.

The Wii Remote is housed near the front of the Wii Zapper, whereas the Nunchuk attachment finds its home near the back. It’s up to you whether you want your left hand or your right hand to lead. As with all official Nintendo accessories, the Wii Zapper is very well-built and you’ll have no trouble getting the Wii Remote and Nunchuk to fit properly. The cord management, since the Nunchuk still has that cable, is also quite good. There is a hatched compartment in front of the Nunchuk portion.

As an added bonus, the Wii Zapper comes bundled with a free copy of Link’s Crossbow Training and can be found for around $19US or less. Although not nearly as robust as a full game, it is a great title for introducing you to the Wii Zapper. I’d say it falls under the same category as Wii Sports. 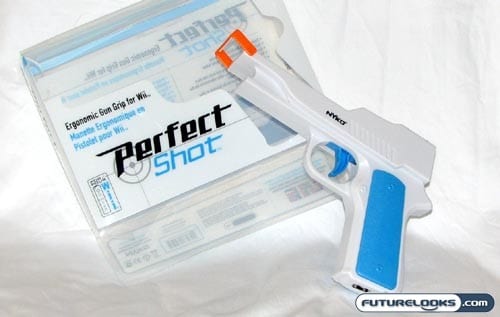 As an alternative to the Wii Zapper, the Nyko Perfect Shot offers a form factor that is closer to being a regular hand gun. There is a connector pass-through in case you need to make use of the Nunchuk attachment, but the Perfect Shot does not have a shell for the Nunchuk itself. 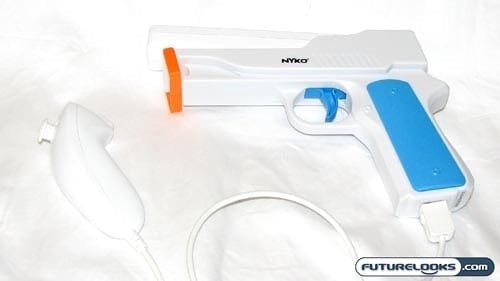 While fundamentally effective in what it wants to achieve, the Nyko Perfect Shot is far from perfect. I had quite a bit of trouble getting the Wii Remote to fit into its slot on the top of the gun attachment. The back portion makes it difficult to line up the Wii Remote with the connector. I think the “hood” in the back needs to be retracted.

Looking to the future, Nyko says that it will have new versions of the Perfect Shot that utilize their special Nyko Wand Wii Remote alternative. Instead of simple mechanical input to hit the buttons, it will use an electronic interface where the shell and the Wand can have two-way communication. The current version as shown should run you about $14.99 US.