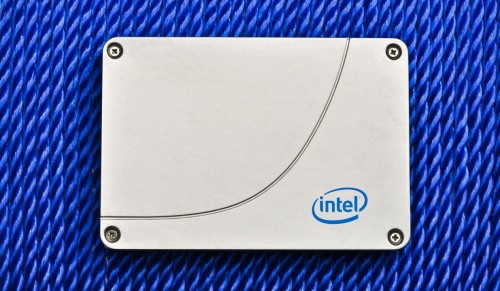 The number one question for Intel a few months ago was where were their higher end, fast SATA6 SSDs. There were plenty of Sand Force SF-2281 controlled SSDs pushing 6Gb/s speeds on the market yet many were using Intel NAND. Today we get to answer that question with the launch of Intel’s SSD 520 Series Solid State Drives. They begin finding their way to the shelves among the rest of the hot rod SATA6 SSDs this week and everything about them is all “Intel Inside” straight down to the supporting SSD Tool Kit software. The big question is did engineers bring us a polished weapon against slow system performance or a new blue screen symptom? Let’s find out! 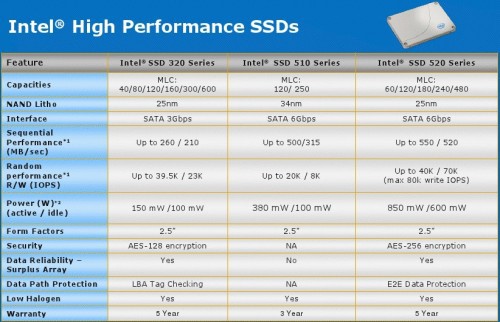 From the comparison table (provided by the good folks at NVM Solutions Group), we see the three latest high performance SSD series. The SSD 520 uses an LSI SandForce controller writing data to 25nm NAND that produces “up to” 550 read / 520 write sequential performance. It’s also a synchronous SATA6 which means faster performance while the 510 series is an asynchronous configuration. The SSD 520 also comes with “end to end” AES-256 data encryption meaning data is extremely secure inside and out should it fall in to the wrong evil hands.

Like most consumer oriented SSDs, the 520 uses standard MLC (multi-layer cell) NAND that is still far more affordable than max endurance SLC (single layer cell) NAND reserved primarily for the Intel 710 enterprise series SSDs. The reason is because SLC is capable of 900TB to 1.5PB write endurance as well as faster 4K data block performance and comes with a higher price. For our MLC drive here, pairing better grade NAND with smarter controllers created by Intel and SandForce extends their life span which is deserving of better warranties. The SSD 320 and SSD 520 both offer a 5 year warranty. The more price conscious SSD 510 offers a 3 year. These warranties are almost identical to regular hard drives depending on the models. In some cases, they are actually better due to the hard drive industry scaling back on length of warranty. 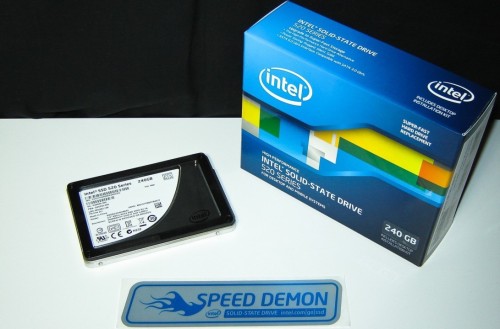 Comparing prices is a little difficult because the three SSD series share only one common 120GB capacity. If you’re looking for a decent Intel SSD 320 160GB SSD may be a good fit for your laptop, priced at around $274.99 US. If you’re looking for a cheaper asynchronous SSD 510 series 250GB solution, pricing starts around $565 US. And finally, the synchronous SSD 520 240GB (as tested) and 480GB retail for about $509 and $999 respectively. Keep in mind that prices for the SSD 510 will drop repeatedly till it’s phased later on in the year so keep an eye out for great deals. 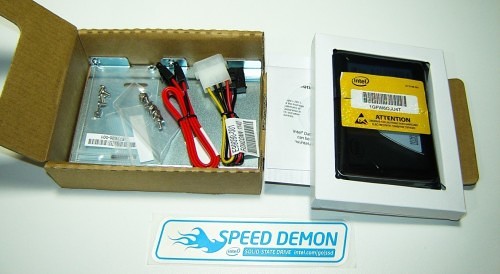 The Intel SSD 520 bundle is pretty simple yet contains everything you’ll need to get it connected immediately. While it’s not quite as elaborate as the Kingston HyperX SSD Bundle, it’s still better than many. Aside from the SSD itself, there is a 4pin to SATA power cable, red SATA cable, SSD adapter plate, mounting screws, driver/software disc and documentation. The adapter plate isn’t the prettiest we’ve seen. A nicer plate that says I have a flagship consumer Intel SSD wouldn’t have hurt.

Naturally, retail SSDs come with the software disc that includes SATA driver for setting up RAID, Intel SSD Toolbox for SSD maintenance, Intel SSD Firmware Update Tool and Intel Data Migration software so you don’t have to reinstall the OS all over again. You won’t find Intel Rapid Storage software on there since it’s mainly needed by the motherboard chipset rather than devices. 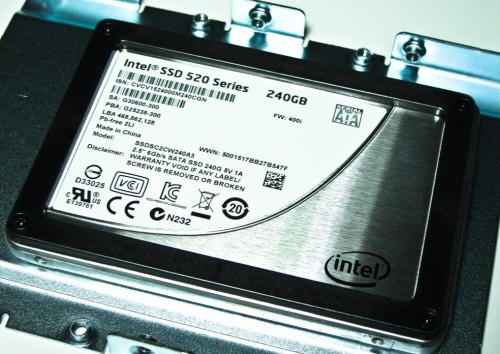 I wanted to make sure all the SSDs in the lab had an optimal platform that would stretch their little NAND legs. I chose to use an X79 test system using arguably one of the best motherboards out there for power users. This way the system has a full speed PCI Express bus.

As each SSD was added, the system rebooted make sure each SSD was properly communicating with the system. Windows write-cache was disabled as it impacts data rates by a few MB/s on most all storage devices. The SSDs were all also loaded down to about 65% capacity for a more real world performance effect. The content included a few games, quite a number of benchmarks and a large amount of media files in various sizes.

The programs used to test the Intel SSD 520 included Crystal Disk Mark for its intense data compression, ATTO for IO performance and PCMark7 which provides a more tangible results in regards to overall system performance in day to day tasks. That’s why you continue to hear leading engineers say it’s the quickest, easiest performance update you can give your system. A far better bang for the buck than any CPU or memory upgrade for the time being.