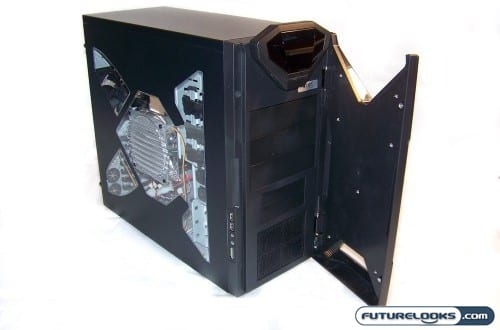 When it comes to computer cases and supporting components, the market is separated by vendors with different levels of products to different users. Typically, the average user who uses their system for a lot of everything don’t put much thought into their computer case aside from cost. Then there are users who enjoy the cleanest, most polished, professional look and are willing to pay for it. Finally, we have gamers who have a certain sense of pride in showing off their extreme gaming systems, usually in a modified case of some sorts.

With the market so spread out, it’s not uncommon for manufacturers like NZXT to offer products that span the three largest groups of users. Their Classic and Crafted series cases contain a little of something for everyone. Granted, there are a few very ‘creative’ cases that have come and gone, but with some valuable experience under their belts, they’ve produced some new interesting designs. Today we’ll be looking a case that has seen some of this experience: The Guardian 921. 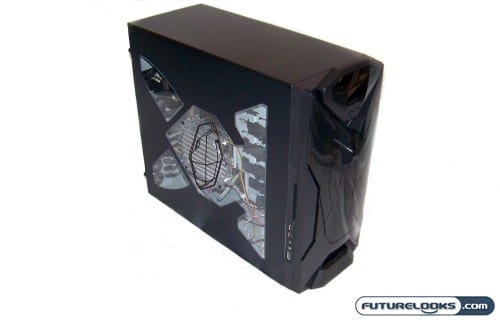 The Guardian 921 is aimed completely at budget conscious gamers with the right amount of features and cosmetics. At a price point, NZXT has still been able to include the following features:

This is a pretty decent array of features for a budget gamers’ chassis. While we’d all love a black interior, the feature would drive the price up considerably. Controllable fans aren’t necessary in this case since they’re the quieter variety of 120mm cooling fans, but of course, a bonus is a bonus. 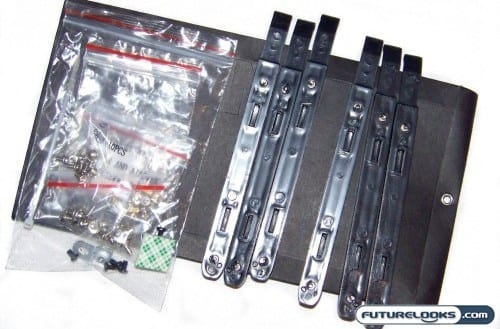 As far as the case bundle is concerned, it’s rather light weight since most the needed tool-less hardware is already installed. In a small brown envelope were mounting screws, tool-less black hard drive rails and a user manual.
There aren’t any extra zip ties or clips for wire management.

It would have been nice to see just a few small items to help control the spaghetti wiring. We’re pretty use to having well manicured systems around here. It makes for a really slick experience when wires are well managed and you can do that right out of the box.

The New Face of the Guardian

Looking at the Guardian 921, it’s very obvious that NZXT has listened to comments and suggestions on the first guardian by offering a much more user friendly case. As a result, the Guardian 921 is a far nicer looking case than its older sibling.

The original Guardian was one of NZXT’s signature cases and was the brainchild of case innovator, Johnny Hou. Johnny still pays homage to his original design, but tones it down for a new generation of case owners. It’s a more mature version of the famous “Gundam Case” if you will. 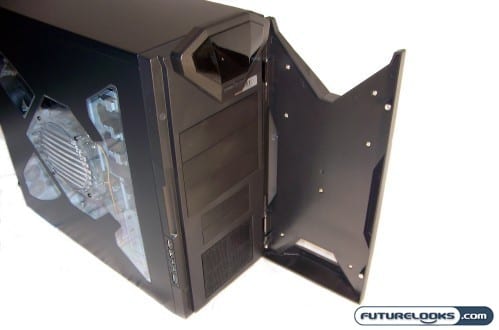 There’s an ominous “eye” of sorts at the very top above the door that displays three different temperatures when in operation. One could use the sensors for most any reason to keep tabs on three different components. Obviously, one of them offers an internal case reading.

The bezel is enclosed behind a hollow door with an interesting back lit ‘Y’ symbol to add a further robotic feel. It lights up when the case is operational. Given their size, they shouldn’t be bright at all which is important when looking for a good balance of looks and illumination in a modified case. The door offers an open molded frame at the bottom to allow internal airflow from the front of the chassis.

The bezel is much cleaner this time around with the usual 5.25″ and FDD tray plates behind the door. A decent fan grill/filter provides air flow via an internal blue LED 120mm cooling fan. It offers typical air flow for this size fan which is around 60 CFM. This should help cool the hard drives mounted inside fairly well.