Not surprisingly, the monitor is packaged semi-separately from its base, so you will have to put the two pieces together. This is a very straightforward process and you shouldn’t have any trouble with it. Separating it is a little more difficult, but if you’re careful, it can be just as easy.

No, this probably won’t be quite as satisfying as playing on a 50+ inch HDTV, but it still outshines most typical monitor configurations when it comes to console gaming. The PC gaming crew has long since grown accustomed to 16:10 aspect ratios, but when it comes to conventional multimedia content (like movies) and console video games (like the Xbox 360), you need to have a screen that does 16:9. To put this “secondary” feature to the test, I connected the Asus VH242H to my Xbox 360 (via HDMI) for some Street Fighter IV action. 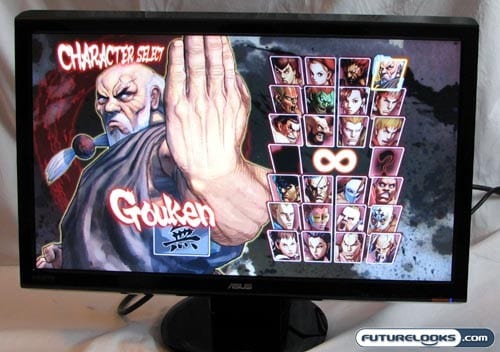 In terms of video quality, it was about on par with my main Samsung HDTV. I achieved a similar level of detail and framerate, getting minimal motion blur. I did find that the ASUS was quite a bit brighter and it was almost “washed out” with the level of whiteness, but this was easily rectified with a little work using the Splendid video presets. I also did some manual tweaking of the color, contrast, and brightness to better suit my gaming preferences.

The one strange thing that I did encounter is that while the video content was perfectly up to par, the audio side of the equation wasn’t quite as cheerful. As you know, an HDMI connection is used for both video and audio. I found that the sound would cut out at times through the integrated stereo speakers. This wouldn’t happen in the heat of the action, but there was a noticeable lag for the sound to “start up” following a period of silence. For example, the loading screens are silent. When the match was about to begin, it would take a second or so before the sound would kick in. This was not the case with my regular TV.

If you’re going to be staring directly at your LCD monitor all the time, viewing angles are not that much of a concern. However, since the ASUS VH242H has that 16:9 aspect ratio for a compact home theatre effect, there is a distinct possibility that you will be watching movies or playing games with someone else. When you are sharing content, viewing angles become more important.

The claimed 170-degree horizontal viewing angle is perhaps a little generous, but if you’re watching the screen at that sharp of an angle, you aren’t going to see much anyway. 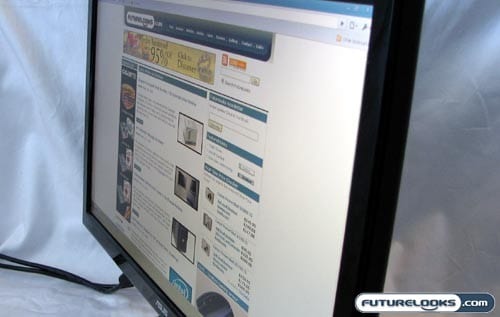 The vertical viewing angle, however, was a fair bit more limited. When you get to about 50 degrees above the horizon, you start to see some of the details start to fade away. The issue is nowhere near as pronounced as what we saw on the debranded HP monitor and there weren’t any strange color effects at more extreme angles, but the vertical angle wasn’t exactly the most impressive thing in the world. That said, this is a very minor issue, because when would you be staring down at your screen at such a sharp angle?