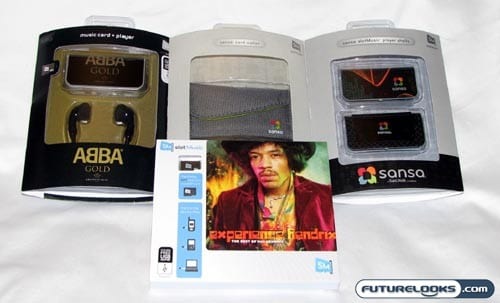 In a portable music market currently dominated by the Apple iPod, other companies are scrambling for something that will differentiate their product from the one coming out of Cupertino, California. Not only do they want their players to be special in some way, but these devices have to be different in a good way. The Sansa slotMusic Player, for instance, has a completely different philosophy when it comes to enjoying music on the go.

Instead of trying to jam as many expensive features as possible, the people at SanDisk decided to take a simpler and more streamlined approach with the slotMusic Player. It’s meant to be versatile and easy-to-use, while still appealing to people who prefer to buy their music in a physical form. It’s certainly different than other MP3 players out there.

Part of the reason why the iPod has become so popular is that it is so heavily integrated with the iTunes Music Store. Users can plug their iPods into their computers, connect to iTunes, and purchase their songs a couple bucks at a time. That’s all well and good, but there are still people who prefer the experience of having something physical in their hands to represent their purchase. 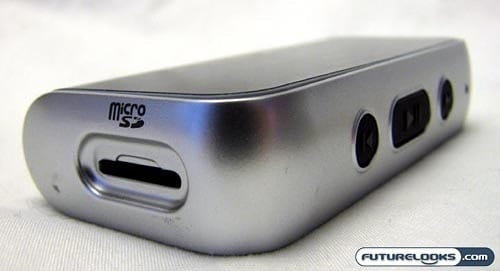 These microSD memory cards come preloaded with an album of your choosing. When you want to listen to those tunes, you simply insert the chosen microSD card into your slotMusic player, just like how you’d load a compact disc into your old Sony Discman. The memory cards do contain additional memory so if you need to carry a few photos or other data, you are welcome to use the rest of the space for that.

If you’re not really into the Dancing Queen scene, SanDisk Sansa also has bundles available with Akon, Connie Talbot, Don’t Quit, and Robin Thicke. In the future, I’d imagine that there will be more to choose from as well. If none of these appeal to you, the slotMusic Player is also available for purchase on its own.

Despite its somewhat inexpensive appearance, the Sansa slotMusic Player actually feels very solid and robust in the hand. Especially after you install the AAA battery, you can really get a sense of weight. Speaking of the battery, since standard issue AAAs are the power source, it is easy to find extra juice while on the go, at any corner store in the world.

The build quality appears to be quite good, but you have to realize that this is meant to be a very, very simple player. Set that expectation bar pretty low, because that’s mostly what you get.