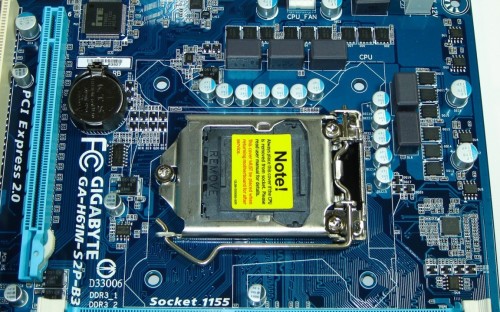 One question I often hear is what brand and model motherboard would I recommend for someone looking to spend the least amount of money to upgrade. The answer always comes down to the user’s particular purpose and peripherals needed to fill that purpose. A basic assumption users make is that they have to buy a model motherboard somewhere in the middle just short of the flagship to get the most out of the processor or peripherals. But that’s not always the case. For example, this entry level micro-ATX motherboard from GIGABYTE called the H61M-UD2-B3 offers the same advanced Sandy Bridge performance features as premium boards, but costs well under $100. Let’s see what it can do! 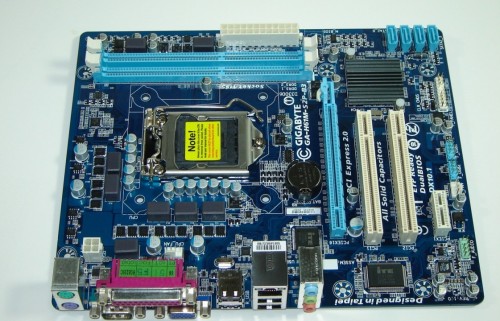 To put it bluntly, the GA-H61M-S2P-B3 is basically a full speed single slot PCI Express 3.0 motherboard in a micro-ATX package. With features like Humidity Protection, Electrostatic Protection, Power Failure Protection, Dual BIOS Protection, High Temperature Protection and intersil VRD 12 CPU to PWM controller regulation, this seems more like a motherboard built for endurance or 24/7 use in a dusty office environment where no one cares about that box shoved in the corner of a cubicle.

The rest of the features include On/Off Charge Technology for charging devices through USB, 3TB HDD support, Smart 6 software management and AutoGreen to put the system in sleep state when you and your cellphone are out of range. Think of it as Bluetooth security of sorts, or just a nod to Mother Nature.

Because this budget board supports Sandy Bridge integrated graphics, you’ll find a VGA out port. However, there isn’t any Lucid Logix Support to utilize discreet and integrated graphics at the same time. That same budget placement shortens the memory DIMM slot count to two, and adds old school PS2 ports for keyboard/mouse, serial port, parallel port, D-Sub port, 4 USB on the back, 4 USB internal header, single LAN port and a 3-channel audio jack. It definitely has all the signs of an upgrade board for legacy users and at under $90 bucks, not a bad way to bridge the gap. 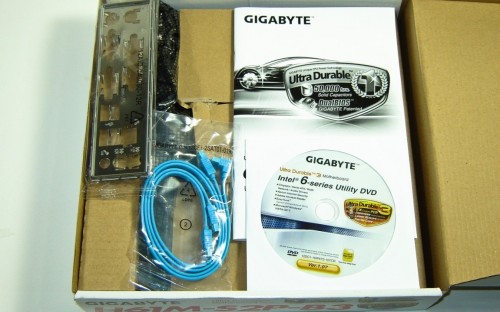 Inside there are a couple blue SATA data cables, generic IO shield, Manual and DVD with the GIGABYTE software and drivers. There might even be a sticker or two floating around in your box. Whatever you need to get set up is on the DVD. If you’re new to PCs, the manual is pretty detailed as always and well manicured by GIGABYTE’s copy editors. You should be able to figure out what you need to do step by step.

I compared the GIGABYTE GA-H61M-S2P-B3 to a regular ATX Intel DP67DX Extreme edition motherboard. Here’s the break down of just how it was set up.

Since the GA-H61M-S2P-B3 only supports 1333MHz DDR3 memory, both systems were tested at that frequency. There’s very little overclocking potential when it comes to the H61M. You’ll get some extra MHz out of the CPU but not enough to reach higher memory frequencies. We found overclocking to be fairly fruitless overall as it wasn’t designed for that at all so we decided to leave it be.

The test is a bit simpler than usual. PCMark7, Metro 2033, Batman Arkham City, RightMarkAudio Analyzer and IO components were the only things tested. From these, we should more than be able to see if the H61M-S2P-B3 can keep up or not. 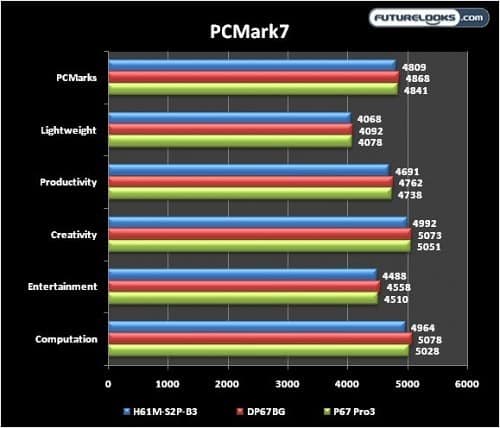 The scores aren’t too far apart in PCMark7. Again, most of the performance is in the CPU, memory, video card and SSD storage. However, the H61M-S2P-B3 doesn’t have any fancy audio or sub-components to improve performance overall and there is likely little to no tuning that is implemented on its higher end brothers. That’s okay though as this is a budget board. It can still get the job done all day long. 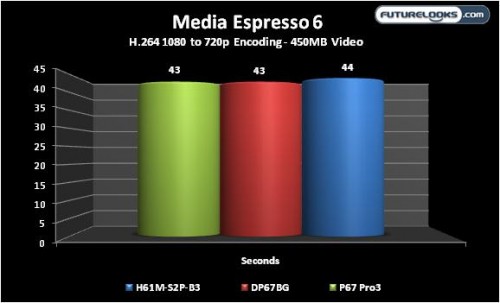 It’s an even fight because the benchmark is strictly using the CPU. The board does just fine doing a little transcoding but of course if the board had the full Lucid Virtu implementation, it would decrease that encoding time further. However, the biggest take away is that it doesn’t lose any CPU performance because of its size or design.

Now that we’ve looked at the standard level of performance, which seems to measure up just fine, let’s see how it does in a game or two.