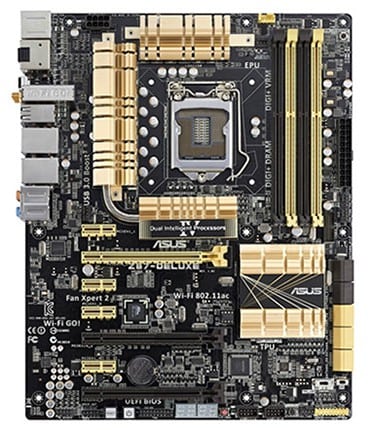 The release of a new generation of processors, especial those with a new socket design, are always accompanied by an array of new motherboards. These mass releases are used as time to experiment with new ideas, new software, or new products. ASUS is getting ready for the upcoming release of the Intel Haswell platform with a preview of all of their upcoming motherboards.

ASUS was hard at work behind the scenes with 9 motherboards to be ready in time for Haswell. This includes a full range of standard boards Z87-PLUS, Z87-PRO, Z87-DELUXE for the regular user along with the Z87-WS (Workstation) for professionals. Each of these boards will include a large variety of great features such as the improved Dual Intelligence Processor 4. These will be the standard by which ASUS designs their other lineups. But we’re not sure what is up with the “gold member” color scheme. 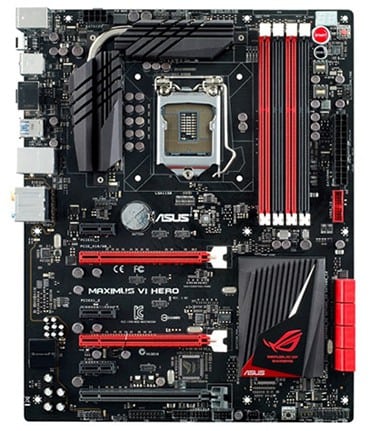 The next lineup from ASUS is the ROG series for PC enthusiasts. These are the next generation of the MAXIMUS series with the new MAXIMUS VI HERO, GENE, and EXTREME. The new addition of the HERO will be an ROG board set at a lower price point (rumored to be around $200 USD)  for those who want an ROG board, but they were previously out of their price range. The GENE and EXTREME will also have some new features such as a 5.25″ system monitoring console. 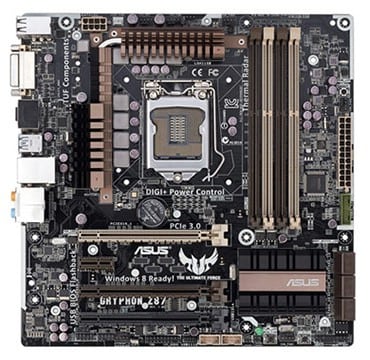 The final piece to the puzzle is the TUF series famous for the ASUS SABERTOOTH. This time the SABERTOOTH Z87 will be using Japan-made 10K Black Metallic capacitors with a 20% higher tolerance of heat. For the first time ASUS will be adding a new board to the TUF series in the GRYPHON Z87 which is identically to the SABERTOOTH, but the GRYPHON Armor Kit will be sold separately.

There is clearly no shortage of selection as their three line-ups cover every possible category. There is a lot of information about the upcoming series below and I recommend you read through it if ASUS is the brand you intend to use with your new Intel Haswell processor on the new LGA1150 socket.

— ASUS, ROG, TUF, and WS boards based on the Intel® Z87 chipset cater to a wide range of needs, from everyday computing and digital content creation to extreme gaming —

“ASUS possesses the best research and development expertise, and as always we are confident that we offer our customers the finest quality with these new motherboards. We’re including a variety of media-praised exclusive features with each model, and are proud to announce that we have the most comprehensive Z87 motherboard launch lineup, all available simultaneously”, commented Jackie Hsu, Corporate Vice President and General Manager of Worldwide Sales, ASUS Open Platform Business Group.

ASUS branded motherboards introduce a new premium color scheme while delivering the highest standards of innovation, performance, and reliability. Multiple offerings include a wide range of customer segments, led by the high-end Z87-DELUXE, which delivers a wide variety of advanced features and connectivity options. The Z87-A targets mainstream builds with incredible performance while offering exclusive ASUS features. Additional models include the Z87-PRO and Z87-PLUS motherboards that provide enhanced features and performance in their target segments. The Z87I-DELUXE offers best-in-class options, design and performance in a remarkable mini-ITX design. The Z87 WS provides workstation reliability and feature sets for professional design and content creation applications.

ASUS introduces their next generation Dual Intelligent Processors 4 with 4-Way Optimization technology that integrates new features to enhance the ways customers manage their PC for improved gaming, entertainment, and productivity performance. The TPU performance tuning chip, EPU energy consumption manager, DIGI+ Power Control, and Fan Xpert 2 can all be activated with one click of the mouse. This exclusive 4-way optimization automatically enhances performance, optimizes energy efficiency and digital power management, while adjusting case fan operation for reduced noise and improved cooling. When users are away from the PC, this design intelligently shifts to Away Mode, allowing customers to download and stream content or backup data with minimal power draw.

Setting new levels of performance for gamers and overclockers

The flagship MAXIMUS VI EXTREME motherboard brings the ROG tradition of setting world overclocking records to Z87. It arrives with the ASUS OC Panel, a real-time overclocking and system monitoring console that can be placed in a 5.25” drive bay or used externally. When used externally the OC Panel offers a variety of detailed overclocking settings in Extreme Mode. Additional ROG motherboards are arriving in the near future and will complete the largest and most diversified lineup of Z87 gaming motherboards in the industry.

The TUF motherboard series arrives with the SABERTOOTH Z87 and the addition of the GRYPHON Z87, the first micro-ATX TUF motherboard. Both deliver rigorously tested TUF cooling and durability even under the most demanding usage conditions. TUF motherboards use high-durability components such as Japan-made 10K Black Metallic capacitors, which support 20% greater extreme temperature tolerance and five times the lifespan of generic capacitors used in other motherboards.

All of the above are standard on SABERTOOTH Z87 while GRYPHON Z87 provides customers the flexibility of the optional GRYPHON ARMOR KIT (sold separately), which upgrades it using Thermal Armor, TUF Fortifier, and Dust Defender.

Do not settle for less

ASUS tests every motherboard series with hundreds of memory, expansion card, and external device combinations from almost every supplier in the market to ensure launch compatibility that continues throughout the life cycle of the product. ASUS motherboards also pass the most demanding stress testing process in the industry, verifying their stability, reliability, and longevity for users now and into the future.

ASUS, ROG, TUF, and WS Z87 motherboards will be available from mid-2013. Pricing and availability for specific models may vary between regions.