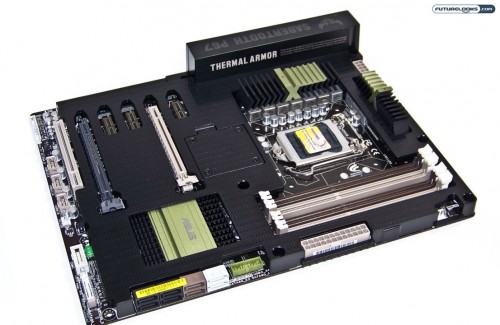 Before the world learned of the Intel Sandy Bridge processor, ASUS took basic Intel chipset features we’ve come to expect and improved upon them. They’ve also come up with creative looking motherboards to fit each product series. Take the P8P67 EVO for its elegant heatsinks to the aggressive ROG series with its red and black motif. Now they’ve taken things further by creating a new series of boards for mission critical objectives. This new series offers the highest grade electrical components, a 5 year warranty, and a bullet proof vest. The end result is the ASUS Sabertooth P67 Motherboard which is part of their new TUF series of motherboards. 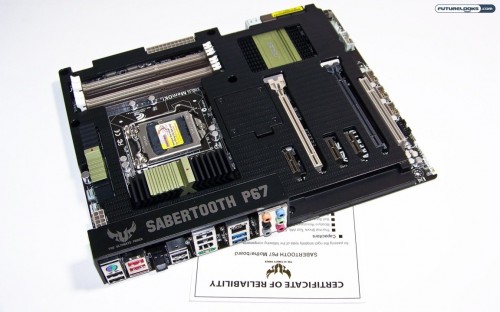 The key features of the ASUS Sabertooth P67 are two fold. Of course, we can see that the board’s TUF Thermal Armor (or TUF Jacket as we’ve come to call it) is extremely unique to this series. It’s very possible this will be around for some time and may possibly show up on new motherboards later. But, the more important features are the ones underneath the jacket.

The TUF jacket’s concept is simple; create an air channel between the motherboard and jacket. With proper air flow, everything gets cooled off nicely. Without it, there’s little to no air flow except from your case and/or CPU cooling fans. This works with the Thermal Radar monitoring sensors that provides temperatures in real time.

Integrated into the motherboard, as well as every ASUS P8P67 motherboard, is ASUS’ high end DIGI+VRM technology. Rather than drown you in the electrical engineering speak, the purpose of this technology is to provide the processor and supporting components with maximum power at the highest possible frequencies by controlling signal oscillation. The steadier the signal, the more reliable the power being provided. With this tuning, the Intel Sandy Bridge processor’s Turbo frequency increases quicker and can be sustained for longer periods of time. This also benefits the CPU when overclocking. 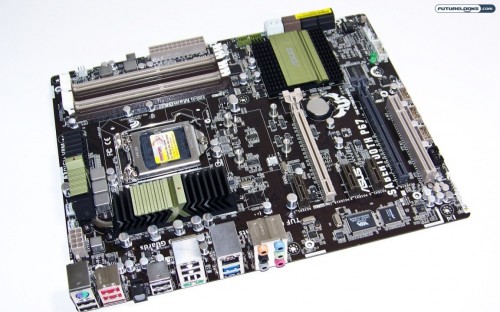 Between the E.S.P Efficient Switching Power Design that benefits the entire platform’s power requirements and TUF Components (Alloy Choke, Capacitors & MOSFETs), it gives ASUS the confidence this board will last you 5 years or more. The components have been used and certified by the military at some level which adds more credibility to the claim. All this is yours for a very fair $219.99 US which isn’t that much of a premium over competing products. 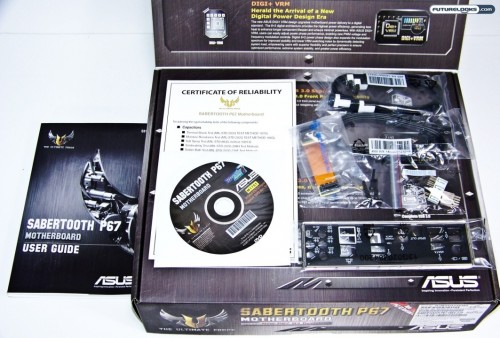 There is also a Certificate of Reliability validated by the Integrated Service Technology testing laboratory. This is a detailed list of the military grade components tested to military standards that ASUS engineers used to assemble the Sabertooth. The list includes seven capacitor, two Choke, and three MOSFET MIL-STD tests. This certificate speaks volumes about the integrity of the Sabertooth P67.

I’m on the fence about the lack of a theme matching bundle. Like the one  found on the P8P67-EVO. On the one hand, the Sabertooth commands a level of value deserving of an impressive bundle. On the other, it does keep the price down despite the platform’s high quality standard.

True to our previous P67 round up, we’ll be using the same components except we’ll be swapping out the motherboard of course and using a GTX 560 Ti instead of the GTX 460. We want to make sure you see test results comparable to a mainstream system. Here’s the break down:

The Sabertooth was tested using the 1502 BIOS from back in March. The rest of the software and drivers were downloaded directly from ASUS rather than using what was on the DVD. We’ll be using a couple ZOTAC GTX 560 Ti to validate a little NVIDIA SLI performance.