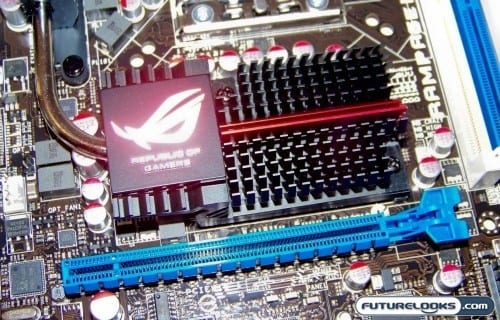 Recently, we reviewed a case called the Silverstone SG05 that housed an impressive ITX form factor motherboard. It offered all the upgradable features found in regular desktop systems including benefits such as mobility, regular desktop level performance, a PCI Express x16 slot, support for DDR2 800 MHz memory, LGA 775 processor support, SATA, and integrated audio support. All of this was housed in an enclosure no bigger than a 10″ x 10″ x 12″ box. While mini-ITX is great for all of these reasons, there are some enthusiasts who want more expansion.

Micro-ATX or mATX boards are essentially a slimmed down version of the standard ATX motherboard. They offer similar expansion features as their full sized brethren including support for the same CPUs and memory. Most of the  mATX platforms that offer great performance have been rare with the bulk of the blame aimed at the available chipsets. With that said, the latest generation Intel X58 Chipset has proven to be anything but lack luster and ASUS has married it with the mATX form factor to produce something truly special.

The ASUS Rampage II Gene is the first mATX motherboard to combine the full performance capabilities of a top end chipset while maintaining a svelte form factor. Is it really the dream board we’re hoping for? Let’s find out! 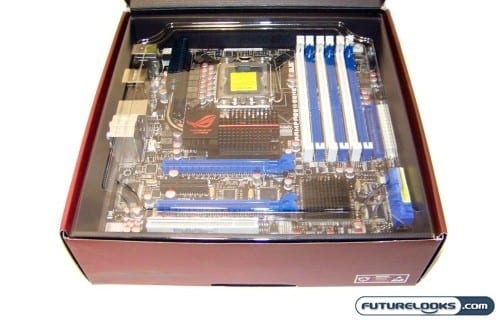 Despite the fact that the Rampage II Gene is a mATX motherboard, the platform still offers some very big features found on its older brother sibling, the Rampage II. The Gene also finds itself emblazoned with the prestigious Republic of Gamers monicker: a sign that it is tuned for the most extreme of gamers.

A quick look at the specifications reveals the following nuggets of goodness:

The rest of the juicy features include an External LCD Poster so you know what’s going on with the system, ASUS Quick Connector to simplify your case’s front panel wiring, and the iROG multiple hardware control. No, this is not some lame Apple product.

The overclocking features are just as aggressive as the full sized Rampage II or P6T Motherboards. The Gene offers Extreme Tweaker for easy access, Voltminder LED for monitoring your extreme settings, COP EX which helps protect your system against overheating, and Loadline Calibration which prevents your basic voltage droop that many regular platforms suffer.

ASUS packages the Rampage II Gene in a nice blood red retail box with the Republic of Gamers moniker. Inside, the Gene actually sits inside a smaller box with a plastic cover so that you’re immediately greeted by the motherboard in all its splendor. 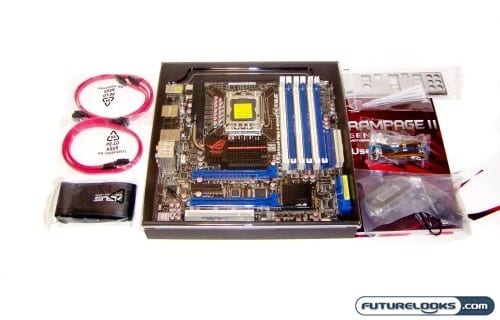 The bundle includes four red SATA cables, mini LCD display, I/O shield, Q-Connectors, black flat Floppy, and IDE ATA cables. Sure, they’re only flat and not round, but a greater majority of users picking up this motherboard will be using SATA. And if they’re not, it would be a huge shame to cripple this board’s performance by using antiquated IDE drives.

Also included is an individual copy of 3DMark 06 Advanced Edition so you can benchmark your system once you have it built. It’s the latest revision and will obviously score higher if you’re using a good video card. The other CD is a copy of Kaspersky to help protect against viruses. You can’t very well pwn your opponent when you have nasty little “bugs” on your PC. It makes for a pretty lame excuse if you lose.