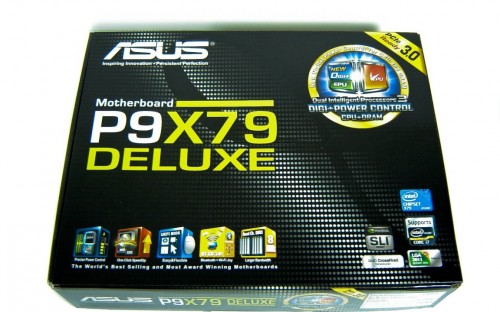 Over the last three years, ASUS motherboards have offered standard physical features across the entire range of boards on top of consistency in stock performance. This has created a very favorable performance experience all around thanks to things like polished features and a robust BIOS. Today we`re going to take a close look at the ASUS P9X79 Deluxe motherboard to determine if that high end consistency continues in to Intel`s X79 chipset. The changes in the Sandy Bridge-E processor alone have added a few variables, but factor in some ASUS engineering and this motherboard could be a champion. 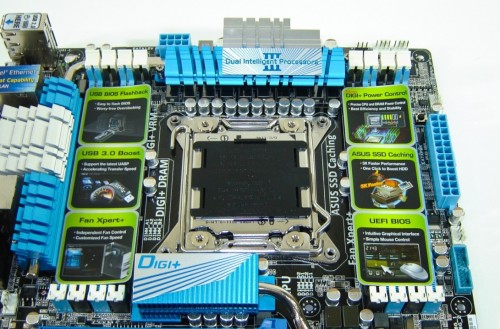 There are a few familiar features that return to the entire array of ASUS motherboards. You’ll find that there is a mainstream segment and the ROG (Republic of Gamers) segment. Still, they all share a base set of features like the ASUS software suite, MemOK!, TPU, EPU and overclocking. However, ROG boards still continue to be the flagship series of choice if you’re a hardcore overclocking enthusiast. Some of the mainstream boards also support SSD Caching via an extra ASMedia SATA3 controller which is a very cost affective way of boosting overall system performance. Have a look at the quick reference table to break down the mainstream series further. (Click to Expand) 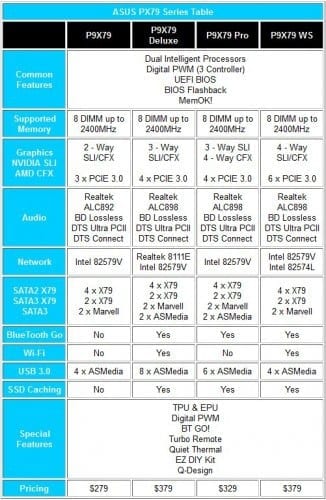 One of the engineering features that continues to set ASUS boards apart from competitors is their unique digital power management which has not only produced strong stock performance but also excellent overclocking performance. While  industry players all use their own designs, ASUS’ design has continued to mature and gives them an edge especially in regards to the X79 platform CPU and memory voltage controllers. We’ll see if it measures up during testing of course.

Price wise, you can see that the differences in features also reflects a different in price for each board. The workstation and deluxe boards are so similar, the pricing is the same. Their purposes of course are quite different. The workstation limits the type of expansion cards to PCI Express 3.0 only and contains validation for more controller cards and peripherals. The deluxe offers the smaller PCI Gen1 slots needed by many consumer oriented products like sound cards or performance gaming NICs. The ROG series is of course in a a whole different category and start at prices about $70 US more than the rest of the line. 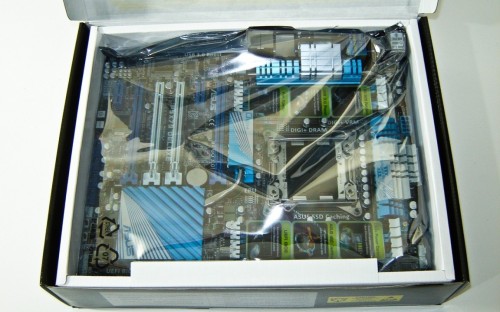 The P9X79 Deluxe comes with an accessories bundle reminiscent of the X58 platform. However, there are a couple extras like the Wi-Fi antennae and the black matching IO shield which looks better on pimped out computer cases. There’s also the Bluetooth GO!/Wi-Fi module which plugs in on the back of the board. 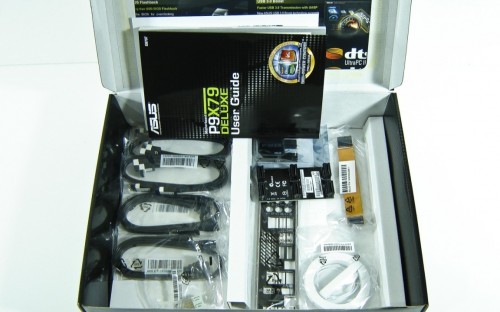 The bundle also includes eight black SATA cables which work for both SATAII and SATAIII storage devices. In support of the 3-way NVidia SLI and AMD CrossfireX, there is a 3-way PCB and 2-way flexible PCI bridge in the box. Detailed manuals and a driver disc round off the kit for getting set up. Keep in mind there are more updated drivers available at the ASUS website but the driver disc will give you enough functionality to get on the web to download them.

A Look at the New Theme 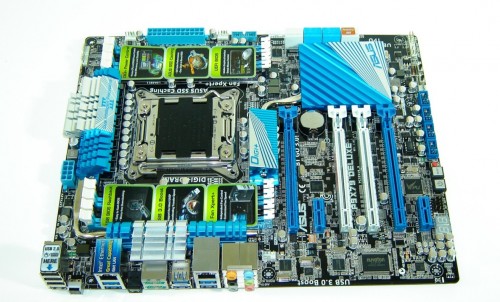 The ASUS X79 board design gets a new set of colors which follow right to the heat sinks. The heat sinks are a slightly lighter color blue than the usual deep Intel blue color. It’s mated with silver aluminum accents to help it stand out.

The X79 layout is quite different than previous generations as well. All of the usual fan headers, USB headers, power sockets, SATA ports, switches, power/reset buttons and front panel headers are all arranged on the outside of the board. This makes sure none of your expansion cards and other components aren’t hampered by wiring and vice versa.

It’s also worth noting that the two white PCI Express 3.0 slots give users the option of spacing a second video card a little farther apart for better air flow. However, if you’re planning on running three video cards, they’ll have to go back to close proximity when installed. This is one of the reasons why we see nVIDIA and AMD partners offering more video cards with better cooling solutions out of the box. The close proximity of triple or quad cards will easily increase temperatures.

Let’s get the board setup and we’ll have a look at some overclocking and then dive right into the benchmarks!