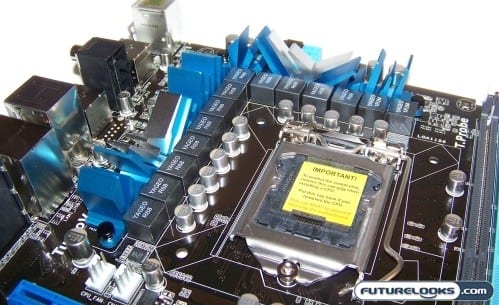 With all the affordable Intel LGA1156 Processors available, content creators and especially gamers have never had it this good. I say this because when you compare any of the new Lynnfield processors to any previous comparable processor, the Lynnfield repeatedly surprises us and comes out on top. This is just one of those times that innovation and design improvements were well worth the investment.

This kind of innovation is equally deserving of platforms that can bring you that kind of performance. Thankfully, the P55 Chipset has proven itself to be worthy supporter of Lynnfield and a worthy successor to the wildly popular P45 for LGA775 CPUs. Choosing a P55 motherboard will prove to be a challenge simply because so many do so well. In the end, it’s the motherboard’s features and appearance that seem to be the decision driver. We’d like to present you with another choice. Today we take a look at the ASUS P7P55D PRO Motherboard.

If you’ve been shopping around lately and are a little confused at the redundancy of P7P55D motherboards, it’s completely normal. Many of the models are very similar with only a couple visible differences to separate them. So, let’s break down the important differences. 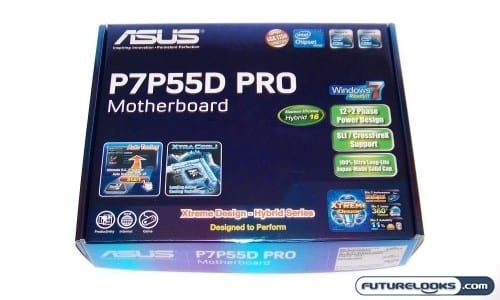 Unlike the P7P55 and P7P55 LE which only support ATI CrossfireX, the P7P55 EVO, Deluxe, PRO, Premium, and WS support both SLI and CrossfireX. The WS is the only model to offer Tri-SLI/CrossfireX  It seems vendors are starting to agree that Triple SLI, while cool to look at, isn’t necessary for today’s most demanding games. Based on what I’ve seen at many of the last year’s gaming events, I have to agree that fewer people are using triple card configurations these days.

All of the motherboards offer some degree of overclocking thanks to ASUS TurboV EVO. The Phase VRM count ultimately decides which models offer this feature. The ASUS Pro in particular uses a 12+2 Phase VRM + T.Probe to power and monitor the system which translates into a Hybrid 16 Phase. This is created by the PEM chip working with EPU chip and the VRM and it is through this combination that the independent phase signals are timed correctly for a maximum of 16. Physically the layout is 12 phase for the CPU and 2 for memory controller. The goal is to provide an even and clean amount of power to the CPU at all times and high grades of efficiency.

A couple potentially powerful features are the native 2200 MHz DDR3 memory support and MemOK with Q-LED. If your system memory craps or encounters some sort of anomaly on the way up to 2200 MHz, the MemOK button will allow you to reset and recover the memory automatically to fail safe settings. This is indicated by the Q-LED feature which tells you for sure that it is the RAM (or something else). Now, this is a handy little feature and a real time saver!

Up till now, the P55 motherboards reviewed used an integrated Realtek ALC889 or ALC889A HD Codecs. ASUS breaks away from the pack and chose a VIA VT1828S HD Codec. While this isn’t as good as a discrete Codec solution, they have had some recent success in producing better than average audio requiring less CPU overhead during operations. This is also the same Codec dubbed VIA Vinyl which supports up to a 10 Channel interface. In either case, it supports 24-bit stereo and 192 kHz sample rates.

The board comes with minimal numbers of cabling. In fact, it comes with just enough to get the average system up and running. I’ve seen some small bundles over the years, but this one is coming in at a close second. 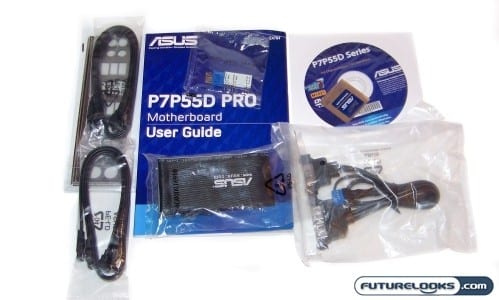 Included are four black SATA cables, black floppy, and black ATA cable. There’s also a PCI mountable eSATA/USB bracket that should simplify expansion options. I can appreciate the fact that they at least all match, but this board seems like it should just offer something more.

For whatever reason, an SLI/CrossfireX bridge connector wasn’t included in the bundle. (o_O) Of all the things that can be a pain to track down, it would be this PCIE bridge. And if you do find one, it’ll probably have another motherboard vendor’s name stamped on it. At least we have the manual and driver disc. That would have really been a bad thing.