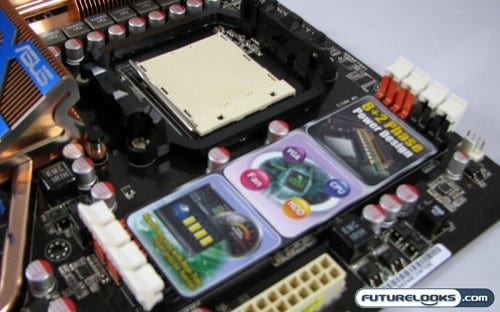 In the review of the GIGABYTE GA-MA790FXT-UD5P motherboard, I had cited a particular design concern I’ve seen on all AMD based AM2+ and AM3 boards I’ve looked at. That particular concern is how close the CPU socket is to the memory slots. If you are using RAM with really tall heatsinks, and want to use a huge CPU cooler, the two will most likely be at odds with one another. Well the Asus M4A79T Deluxe has a little bit of space between the CPU socket and RAM slots, thanks to the addition of a couple of capacitors in the area. I doubt this was the intent behind the placement of these capacitors, but it may have just worked out in their favour. 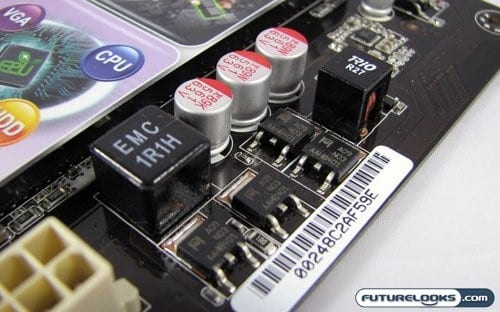 Since we’re kinda-sorta tangentially on the topic, I should mention that Asus has definitely made sure that power on the M4A79T Deluxe is clean and stable. Like many other high end boards, Asus is using only 100% all high-quality conductive polymer capacitors on this board. They have a stupidly long lifespan, and provide more consistent and stable power then electrolyte based capacitors. There is no confirmation on the box about whether or not the capacitors are Japanese in origin, but they’re still better then the alternative. 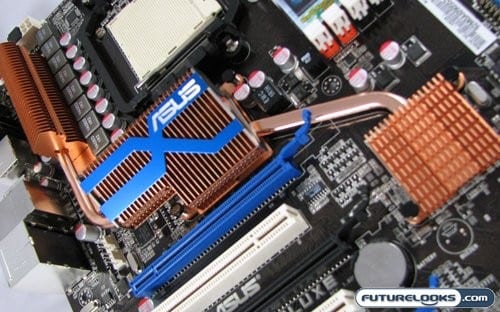 To keep all the important components that aren’t the CPU cool, Asus has implemented a rather large passive heatsink and heatpipe setup. They’ve placed large heatsinks on the MOSFETs and Northbridge, and a smaller heatsink on the Southbridge. This is a tied together using a heatpipe, ensuring that ever under the most stressful of operations everything is kept cool. 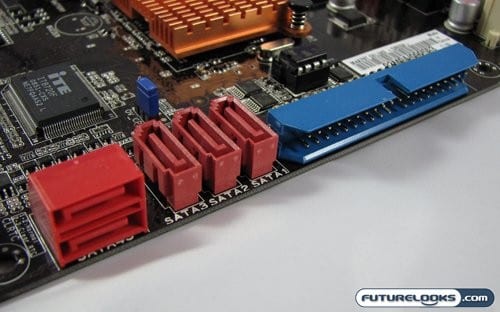 When it comes time to hook up drives, Asus has you mostly covered. I say mostly because of the strange number of SATA ports preset on the M4A79T Deluxe. Usually there’s an even number present like 4, 6, or 10, but on this board there’s 5 SATA ports. There’s also an IDE port next to the SATA ports. As for the way the ports are positioned, they shouldn’t cause any problems for most configurations. The ports that are at a right angle sit straight in line with the second x16 PCIe slot, and sit perfectly under a dual slot video card. The three straight up ports right next to those don’t interfere with the video card either.