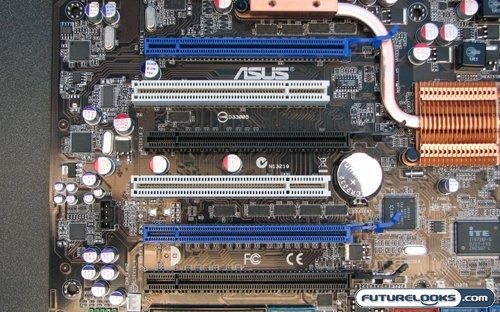 As mentioned in the specifications, the Asus M3A32-MVP Deluxe supports Crossfire X; ATI's mutli-GPU specification that supports 3 or 4 discreet graphics cards. This is evidenced in the number and type of expansion slots onboard. This motherboard sports 4 x16 PCI Express slots, and two PCI 2.2 legacy slots. 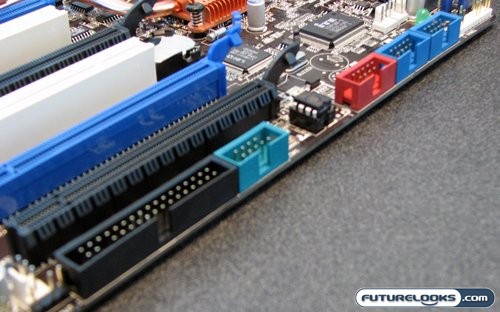 Immediately below the expansion slots are the headers for the front panel audio, USB, and Firewire. There's also a floppy connection, should you still need to use the languishing storage medium. Also present is the front panel LED and power connections, which should you use the afore mentioned Q-Connector should be very easy to setup. 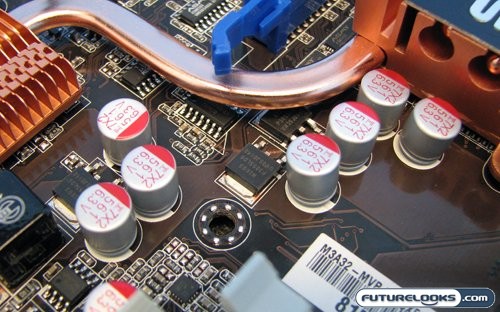 Should you fill up those expansion slots, there shouldn't be any stability or power issues. Rather than using electrolyte based capacitors, this motherboard uses only high quality conductive polymer capacitors. Not only will this prevent the capacitors from possibly bursting and leaking electrolyte (admittedly a problem that has almost been eliminated), but it will provide much cleaner power to the system and quite possibly assist in overclocking. At the very least, it'll give you the extra headroom to connect a whole host of peripherals. 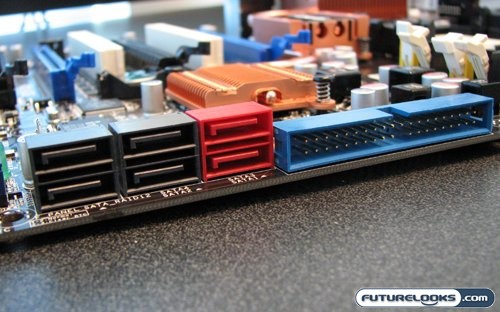 As for drives and peripherals, the M3A32-MVP Deluxe comes with a total of six SATA ports and a single IDE port. All six ports do support RAID in 0, 1, and 0+1 flavours, but the implementation isn't universal. Four of the ports are driven by the AMD southbridge, and the other two ports are taken care of by a Marvel 88SE6121 SATA2 controller soldered to the board. Now you may think that the red ports are the Marvel controller, and the black ports are the AMD. That would be incorrect; the red and middle black ports are the AMD controller and the Marvel controller drives the outside black ports. This is somewhat confusing for those of us too stubborn or impatient to read the manual (read: me), but it is documented. There is also an eSATA port on the rear. 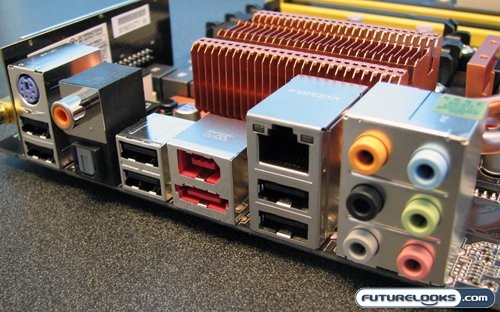 On the rear panel, you will find a very legacy unfriendly setup. The only old school port is a PS/2 keyboard plug, and that's just to concede that USB keyboards still aren't as ubiquitous as the USB connector itself. Otherwise you'll find six USB ports, one FireWire port, Gigabit Ethernet, 6 channel sound with optical and coaxial SPDIF output, and slightly cut-off from the picture the connector for the Wi-Fi antenna.