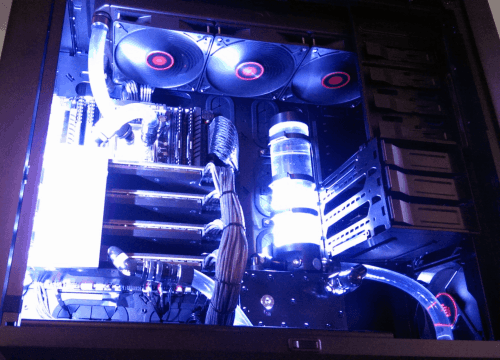 When it came time to create the stunning visuals of the Super Bowl XLIX half-time show, Light Borne, a company that creates and designs the animations and visuals for some of the top musical acts in the world, needed something that could do all the heavy lifting. Surprisingly, they did not opt for a pair of very portable “bazooka tube” Mac Pros. For one of the most important sporting events in the world, they went for a custom built PC instead.

The company needed a single machine, powerful enough to take on location, and create spectacular animations on the fly. The plan was to use a piece of high end rendering software called Octane, and a powerful PC, so they would be able to carry out real-time changes if needed, but also, run things in real time. And because stuff can always go wrong, it needed to be flexible enough to meet the needs of different challenges.

In order to have this machine designed and built, they went to Maingear, one of the top custom PC builders in the US, to construct this machine. 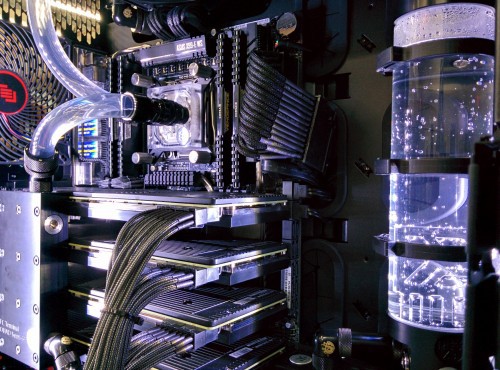 The final configuration consisted of four NVIDIA Titan Zs, a Core i7 5930K Six-Core 3.5GHz CPU, 16GBs of Corsair Vengeance DDR4 memory, a Samsung 850 PRO 256GB and two Corsair AX 1200i power supplies. The system also had an impressive cooling setup consisting of a 420mm Rad on top, 2 x 240mm Rads on bottom plus BiTurboDual Laing D5 Vario Pumps. It’s interesting that they didn’t go with Xeon CPUs or workstation grade GPUs. As we know, both decisions would add a huge premium, but we think Maingear made some solid moves to save costs, without sacrificing stability or performance.

While this configuration isn’t the most high end setup in the world, you can tell that the Octane render software is heavily dependent on GPU processing, which is where the money was spent. The water cooling and the Quad NVIDIA Titan Zs were likely the reasoning for the additional power supply onboard.

The total build, with a long 3 year warranty, was $12,700 US. While this is more than a top spec “trashcan” Mac Pro, which would only cost $9,600 US, with a one year warranty, the professionals at Light Borne have spoken.

Light Borne knew that in order to meet all their needs, the only way to go, was a custom build, and there’s no way you could fit the power of four NVIDIA GTX Titans, into the limited space inside Apple’s most powerful machine, or even have the flexibility, to create one on that platform, due to the proprietary nature of the hardware.

This custom built PC allowed Light Borne to pump out the animations Super Bowl XLIX Half-Time Show at a massive 3780×3024, in real time, allowing them to test lighting materials, and do it without dealy. Even the dancing sharks were happy.

If you want to see this Maingear custom PC go to work, you can watch the entire half time show below…