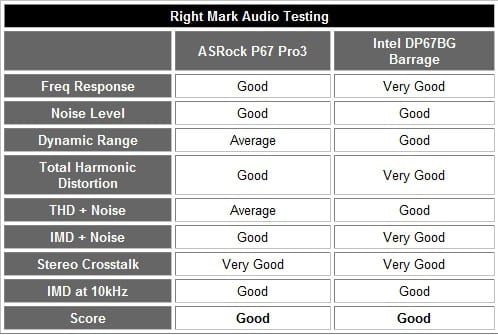 As you can see, RMAA provided us with a “Good” rating throughout. Users who plug in to the analog outputs will hear a pretty even volume level up to about 75% before distortion sets in which isn’t uncommon with Realtek ALC892 audio processors. If you’re looking for a really rich audio experience, you should consider a discreet audio card like an ASUS Xonar or Creative Labs X-Fi. 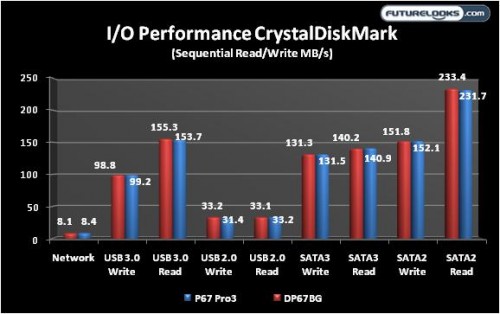 There’s very little difference in regards to expansion ports and data transfers. Both the Burrage and Pro3 are already pretty cleanly arranged motherboards which limits most implementation problems. As long as the drivers are the latest, your results should be similar.

Intel motherboards are pretty low consumers of power. In fact, the DP67BG was the one that gave us that odd cold boot issue with a 1000 and 1200 watt power supply simply because it draws so little power at startup. The PSUs just wouldn’t initialize the system because it was waiting for a higher load. 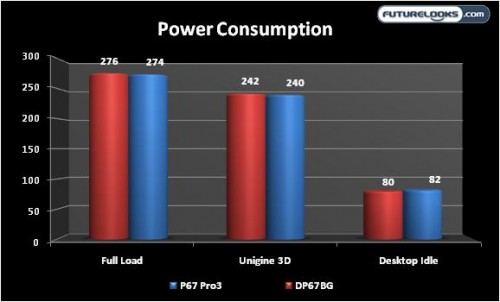 As you can see here, both boards are very comparable. They require little power in either case. If the DP67BG had another ZOTAC GTX 560 Ti graphics card in the second PCI express slot, its power consumption would easily be another 170 watts higher. Something to keep in mind if you don’t realistically need that extra slot.

Now that this motherboard has been put through the paces, lets discuss its overall quality. Operational functions of the motherboard were all in working order at all times. In terms of EMF, or odd sounds during operations, you could only hear ever so slight noises when the system was at its highest load. The motherboard will be silent inside your computer case.

Using the trusty laser thermometer, the PWM heat sinks around the CPU socket sat at 38 C throughout most of the testing. The PCB averaged about 45 C at its hottest point. This is pretty typical for P67 and H67 motherboards under normal use. As with overclocking any motherboard, expect temperatures to increase. Your best solution as always is to use a computer case with decent cooling. 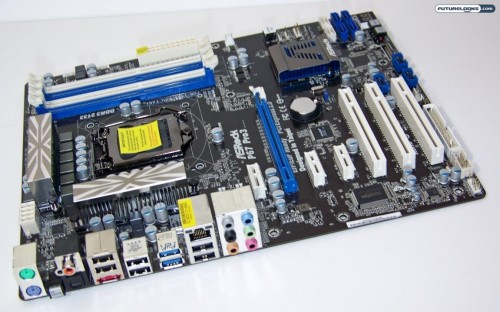 Overall, the ASRock P67A Pro3 motherboard is a standard Sandy Bridge experience, which we know is very good. We know the P67 platforms can perform well, remain stable, and offer a bit of overclocking. When it comes down to the enthusiast looking for a quick OC, ASRock’s Extreme Tuning Utility is a very easy way to go especially if you don’t feel like messing with the new UEFI BIOS. It’s nice to see some software doing what it should without fussing around for stability.

Performance is almost on par with just about any other P67 board we’ve tested. It’s not feature packed or sporting a whole lot of new extras, but that’s not the mission. The P67 Pro3 has the simple objective of giving consumers an extremely affordable solution, allowing the jump to Sandy Bridge to be affordable. Especially if you are still on an LGA775 based system as the ability to use your old cooler will also ave you a few bucks. Gamers will enjoy saving money to spend on more important things like a faster video card.

At a mere $139-129 US this is just about the most affordable LGA1155 P67 Sandy Bridge motherboard there is available. It definitely one “Value Added” offering.

Help us improve our reviews by leaving a comment below!