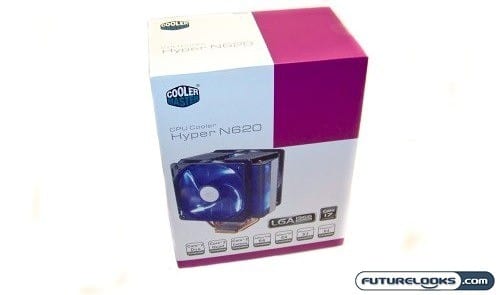 There are many ways to design a good air powered CPU cooler, but just as many ways to affect the performance. Does the size of the fan matter as much as the size of the cooler? Does the flowing copper fins of something like a Thermaltake V1 CPU cooler ensure it’ll cool better? Though Cooler Master’s new Hyper N620 CPU cooler doesn’t look like a great big copper flower, it does have a lot of fins and a couple of big fans.

Can the Hyper N620 cool off this rather warm processor known as the INTEL Core i7 975 Extreme Edition? Let’s put the two together and find out! 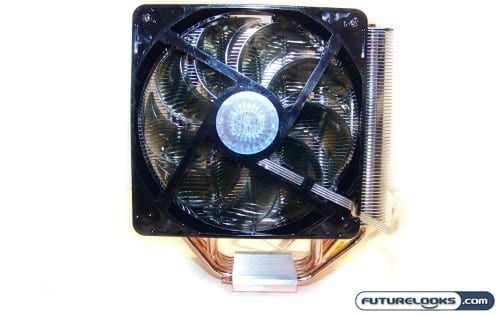 The Cooler Master Hyper N620 offers some notable features mainly in the design of the heatsink and method of cooling. The heatsink is constructed of a fine array of aluminum fins and is attached to six heatpipes that terminate into a mirror finish copper plate that is compressed by an aluminum top plate.

There are two 120mm blue LED fans strapped to the front and back of the heatsink that move roughly 83.6 CFM (Cubic Feet per Minute) of air, which is a fair amount considering the fans top out at around 2000 RPMs. As for noise, the fans themselves emit a claimed 16 – 28 dB of noise. and uses your system’s PWM to regulate the fan speed.

The only socket missing from this party is the upcoming Socket LGA1156 which supports the upcoming Core i5 processors from INTEL. Cooler Master does say that they will be prepared with the necessary upgrade parts for the arrival of this new processor line once they launch on September 8, 2009.

Checking Inside the Box 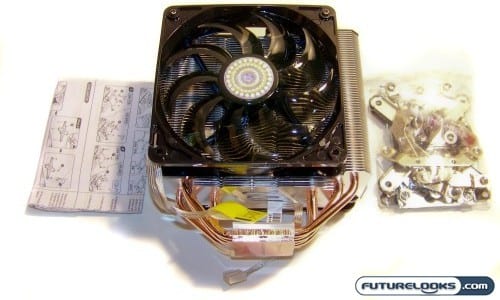 The packaging for the Hyper N620 Cooler is the standard for Cooler Master CPU Coolers. This includes a wide selection of hardware to accommodate the aforementioned sockets. Like previous Cooler Master CPU Coolers that we’ve reviewed, there doesn’t appear to be any cheap materials used in the construction of said mounting hardware. Any visible components are chrome plated or nicely polished. Nicely detailed mounting hardware is a nice touch when considering its an overall presentation.

Instead of including some cheap, single use white thermal paste, you’ll find a little tube of gray paste that appears to be similar to the GELID Solutions GC1 compound. Most of the thermal paste solutions in tubes these days are pretty decent to begin with, but, don’t expect that to drop temps alone.

While, it’s a nice touch, we still tend to use Artic Silver 5 or Ceramique for best results and for consistent testing across the board.