This test, as with many of the tests today, will favor the more powerful FX-8350. We will start with PCMark 8 since it can test the system in low, mid, and high performance use. The home test focuses on general use including web browsing, video playback, low performance gaming etc. The Work suite focus on basic work needs such as word processing and web browsing.

Finally the Creative test pushes the system to the edge with high performance Adobe photo editing, and GPU accelerated tasks via OpenCL. Lets see how the ASRock ITX board holds up. 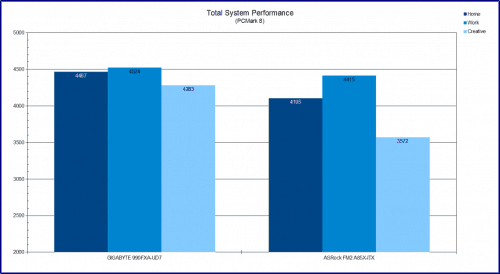 The results fit right into our expectations and show where the builds differ. The 4 additional cores will give the FX-8350/GA990FXA-UD7 an advantage in all tests were the CPU plays a major role. On the hand, both systems will be using the Nvidia GeForce 770, so any test with a GPU focus are relatively even. As you can see, when the CPU tasks are not that intense such as the work suite both motherboards are still close.

Let’s break everything down into groups and focus on what is actually different in performance. We will start with a focus on gaming performance when comparing 990FXA-UD7 to the ASRock A85X-ITX. In these test we will still be using the CPU for physics calculations to verify if the CPU is the root of any performance difference we may see in real world tests. 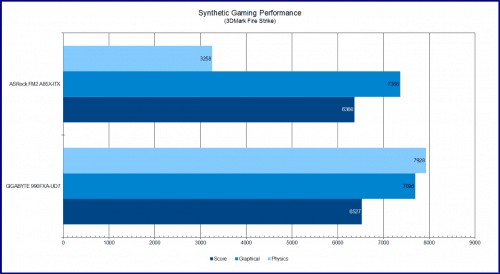 There is a clear, and expected, difference in physics performance with the FX-8350 showing off its muscle. While the additional cores more than double the physics performance, it has minimal impact in gaming and the overall score. This is great news as the smaller ASRock A85X-ITX board can be used confidently, to build a LAN party system, with little impact to gaming performance. In fact, lets put that to the test with real world gaming performance.

One of the many things we as DIY enthusiasts like about an ITX motherboard, is their small stature as the core of lighter weight LAN party systems. The question is always how much power you give up when not using a full ATX board. Lets find out if you are giving up anything worth noting. 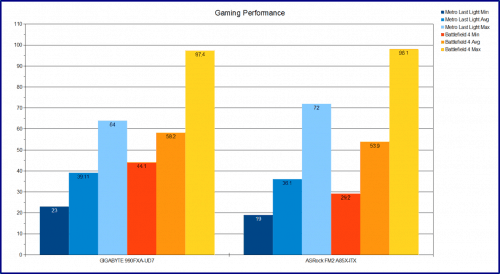 There is a difference in power between the two boards as expected. The A85X-ITX comes in on the lower side of course, but not by much. The average performance for Metro: Last Light and Battlefield 4 is only 3 to 5 FPS lower with the ASRock motherboard. It actually takes the lead in the maximum FPS by a frame or two.

The real difference was when large numbers of physics calculations are needed for close explosions. I could feel the system slowing down and the “chopping” in performance in these situations; however, these drops are very infrequent and only lasts for a few seconds. The 990FXA-UD7 manages to keep a higher minimum FPS especially in Battlefield 4. This is nothing a Richland APU and a little overclocking can’t minimize.

Lets set aside the gaming performance and look more at the motherboards themselves. One of the most important things about a motherboard is I/O performance. These tests will also remove the CPU and GPU as the main focus. This time it’s all about the boards and what each can do. 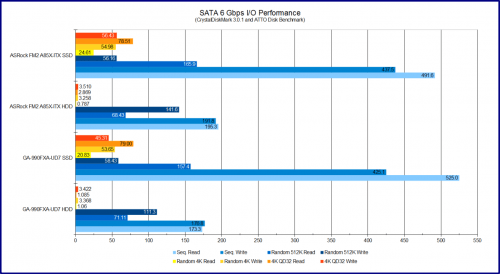 There is no question that the FM2A85X-ITX has the clear win here with SSD and HDD performance consistently better in every test. The only time the larger, more power-hungry 990FXA-UD7 takes the lead is SSD Seq. read. Lets see if we could keep this trend going with I/O tests for the USB outputs.

Now we are going to compare the I/O of the 990FXA-UD7 to the FM2A85X-ITX. This time we are going to include the XFast USB software in the results in addition to normal performance. This will give us a chance to show exactly what ASRock brings to the table. 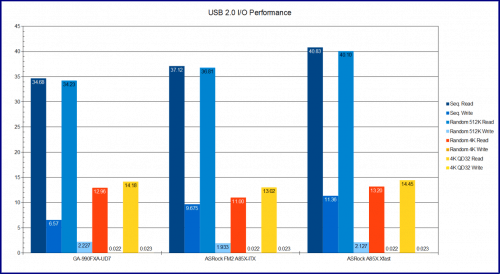 General performance of USB 2.0 is better on the A85X-ITX board with a few exceptions. Even better is that the XFast USB by ASRock increases performance across the board. In the test where the A85X-ITX already had an advantage, the advantage is increased with this software.

In the two tests were the GIGABYTE 990FXA-UD7 had the lead, the XFast USB quickly makes up the difference. If you have an ASRock board like the FM2A85X-ITX we are testing, turn on your XFast software immediately.

Now we are going to run these exact same tests with a USB 3.0 drive.