After all the research, planning, waiting on shipments, the first time you put your hands on a new component should be awe-inspiring. The ASRock FM2A85X-ITX doesn’t disappoint. 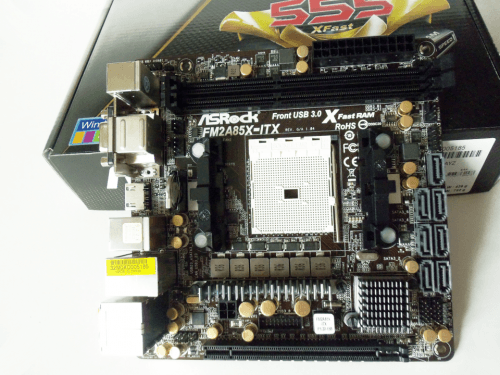 It makes great use of the minimal space it has to work with. The seven SATA 3.0 ports and full 7.1 surround sound analog output are the first things we noticed. Usually, you’d only find 5.1 audio on most ITX boards, and maybe only four SATA ports. This is clearly done by leveraging the power of the AMD Hudson-D4 chipset to avoid the need for secondary controllers. 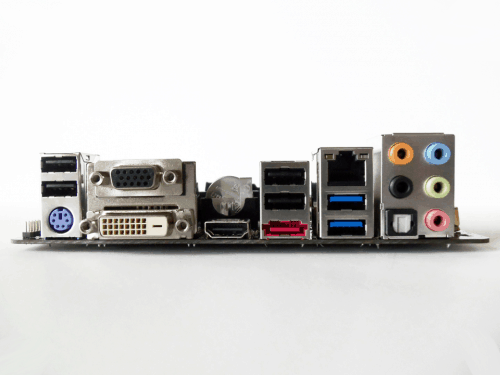 The next thing you will see on the ASRock FM2 A85X-ITX, is the inclusion of a few legacy ports on the rear I/O panel. In today’s market, I don’t see any reason to include a PS/2 port or a VGA port. We would have preferred if ASRock included a DisplayPort output or two more USB 2.0 ports. This is an odd choice to us as the PS/2 port is not a hybrid port, but a dedicate keyboard port. We also would like to see the inclusion of a Wi-Fi adapter on an ITX board like this.

ASRock clearly intended this ITX board to be a jack-of-all-trades. For example, if you’re building a family computer, you have the OMG to set Internet Curfews for children and APP Charger to charge devices while syncing content. If you’re building a LAN Party system, then the AXTU and X-Boost will help you get the most out of your system. Then you have Easy RAID for that home server build. No matter what you are using the board for, the ASRock X Series of software such as the XFast RAM, XFast LAN, and X-Boost will bring your system to a new level of speed. 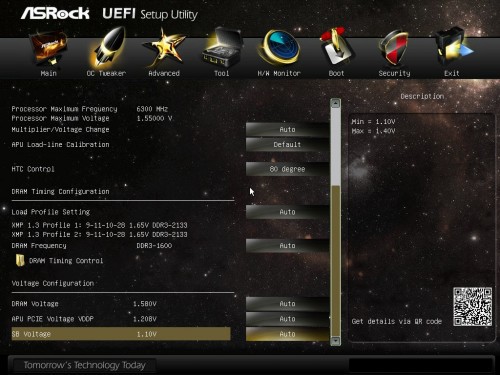 Once you get your system built and you are ready to boot it for the first time, you will be greeted by the same great UEFI BIOS on all of ASRock’s boards. The UEFI BIOS has a gold star background that flickers while you are using it. Actions you take are accompanied by audio cues which help you to know when an option has been changed. You will find a few new things here such as the Internet Flash.

I know all of us here at Futurelooks and many people in the DIY community, have run into hardware compatibility issues during a build that a BIOS update would fix. But how to you update the BIOS if you can’t install the OS? Internet Flash by ASRock is here to put an end to borrowing parts from friends, or downloading USB BIOS update utilities from another PC. You can now just Flash the BIOS from within the UEFI BIOS with no OS installed. We recommend this as the first thing you do with the FM2A85X-ITX board to ensure full support of your APU.

I could do an entire article about the included software and UEFI BIOS of the ASRock A85X-ITX board, but you all want to see it in action. We will let the ASRock ITX board speak for itself in the charts and performance when compared to a top-tier Full ATX board paired with a CPU with twice as many cores.

The system I am working with for test is geared mainly toward those looking to build a LAN Party system. If the ASRock FM2A85X-ITX can measure up as a gaming system, then everything else should be a cake walk. I have paired the A10-6800K (flagship APU at the time of writing this review) with an Nvidia GTX 770 2GB GPU. I also used the XMP profile support from the board dictate the RAM speed.

We have already seen what the AMD A10-6800K can do on its own, so we are going to treat the ASRock ITX board like any other motherboard we review. In fact, I will be directly comparing it to my everyday gaming system’s GIGABYTE GA-990FXA-UD7 + AMD FX-8350 with all the other parts being the same.

The test setup here is a little dated now thanks to the very recent release of new AMD APUs. The same could be said of the motherboard we are reviewing as well. But it was a big seller only two months ago. We will get around to looking at the new generation of ITX motherboards with the new APUs, but we need to see where they are coming from first. This will give us a great baseline to compare them against.