This is an opportunity to show not only the I/O performance of the A85X-ITX, but the throughput gains by switching to USB 3.0 over 2.0. Once again we are including the XFast USB software in the test results. These tests were done with USb 3.0 enclosure housing a Western Digital 10k RPM 1 TB HDD. 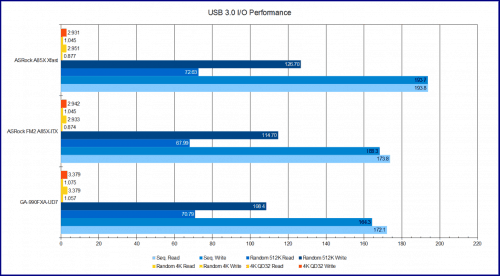 This time the results are not so clear-cut with the 990FXA-UD7 taking more tests this go around. Both it and the FM2A85X-ITX are pretty much even until the XFast USB is turned back on. It gives the FM2A85X-ITX a 10 to 20 MB/s jump Sequential and Random read/write tests putting it well ahead of the competition.

The ASRock FM2A85X-ITX is limited by it size in one particular area: expandability. In our testing, we were using the only available PCI-E slot for the Nvidia GeForce 770 graphics card leaving no other expansion options. This means anyone using this motherboard with a dedicated graphics card can only use the on-board Realtek ALC892 Audio Codec. Lets see how well it stands up in testing.

We have noticed a trend in on-board audio systems for motherboards. Audio performance in general is usually pretty good, but will have a weakness in one or more areas. The ASRock FM2A85X-ITX’s weakness show up in the noise compensation. The actual out of sound during testing had no noticeable issues thanks to the better than average noise level control. The noise is clearly there, but more often than not it is too low to hear in real world use.

Let us start by saying that testing the power consumption for these two boards is not really a fair comparison. While there were a number of improvements in this area with the Vishera FX-8350 we are using in all the tests, we are aware of the AMD FX series of processors tendency to use large amounts of power at full load. With that in mind, take these results with a large grain of salt. 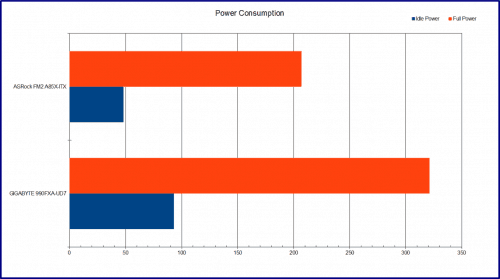 In this test the ASRock FM2A85X-ITX took a commanding lead in power consumption. It maintains an average of less than 50 watts at idle. A full 40 watts lower than the UD7/FX-8350 combo. At full load this gap gets even wider with the A85X coming in around 210 watts compared to the 990FXA-UD7 at 320 watts. We have to declare this one a no contest. But in terms of academics, it’s an interesting data point along with the others, for the smaller ITX platforms. 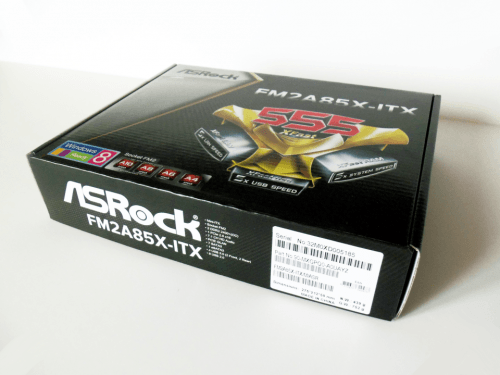 I find myself at a loss of words here. We tested the ASRock FM2A85X-ITX by comparing it to what should be considered a far superior GA-990FXA-UD7 motherboard, only to find that it more than holds its own. The FM2A85X-ITX shows very little difference in real world gaming performance, exceptional I/O performance, and only falls behind in CPU intensive tasks, which we expected. The latter of which is no fault of the motherboard itself.

This motherboard is an amazing little marvel with plenty to offer any DIY build. Especially the ones that call for mini-ITX. The included software proves itself to be more than just fluff with the USB XFast software in particular, moving performance for 10% to 20% gains in USB speed alone. While we had some difficulty with a way to record a performance difference in XFast LAN and RAM, I plan to keep working with it so we can see what this software really has to offer in a future review.

The ASRock FM2A85X-ITX was one of only 3 mini-ITX boards available just a few months ago, two of which were provided by ASRock. The only really draw backs to the motherboard are all inherent weaknesses of the mini-ITX form factor. Crowded on-board ports, only one PCI-E slot, CPU cooler clearance, are just some of the issues. We do have to note this, but we really can’t hold it against it; this would be like saying a compact car is too small.

Although the boards are starting to become scarce, if you are lucky enough to have one, then pair it with an AMD A-6800K and don’t look back. I will be a while before something truly better comes along. If you are not one of the lucky few with this board, then keep the ASRock FM2A88X-ITX+ and FM2A78M-ITX+ at the top of your list. If it’s as good as this board, then they will be spectacular.