At CES 2015 back in January, MSI was parading around one of the first boards to not only supports USB 3.1 Type-A connectivity, it was also the only board to support the new USB Type-C standard connector, which is reversible, and can support up to 100 Watts for charging devices, among it’s other talents. The MSI Z97A Gaming 6 was shown off well in advance of both the new Apple MacBook which sports, amazingly, only one of these ports, which they call USB-C, and the new Chromebook Pixel, that at least gives you two USB Type-C ports for good reason.

Since the port both charges and transfers data, you can figure out quickly why having only one of them is stupid. It’s a good thing motherboards come with more than one port or they’d be useless. 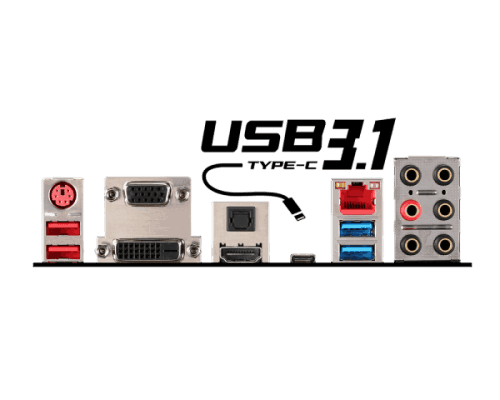 While the MSI Z97A Gaming 6 will launch as one of the first boards on the market to support this new standard, it will also be joined by 11 other products in the company’s motherboard lineup, to support USB 3.1, and the Type-A connector. The Type-A connector offers full backwards compatibility with USB 3.0, 2.0, and 1.1,  and it doesn’t require a new connector. MSI will be using an ASMedia ASM1352R controller to offer this support on their motherboards. Speed is basically the big reason for the existence of USB 3.1 as you can see below…

With speeds up to two times faster than USB 3.0, the standard will allow you to transfer files and connect drive arrays at speeds faster than ever.

There were no comments on pricing or availability, but do expect the USB 3.1 boards to be a few dollars more than their USB 3.0 counterparts. Full press release is below.

The Z97A GAMING 6 is added to the line-up sporting the all new USB Type-C connector. Joining the yellow and black OC Series are the X99A XPOWER AC and X99A MPOWER motherboards. The one and only fully black and white motherboard, Krait, is also upgraded to USB 3.1 on the new X99A SLI Krait Edition. In the Classic Series, MSI introduces the USB 3.1 featured X99A SLI PLUS and X99A RAIDER motherboards. Last but not least, MSI is introducing world’s first AMD USB 3.1 motherboards, the 990FXA GAMING and 970A SLI Krait Edition.

Delivering blazing fast USB performance, up to 2 times faster than USB 3.0. All MSI Z97A and X99A Type-A motherboards offer two USB 3.1 ports, which are fully backwards compatible with USB 3.0 and USB 2.0 devices. The ASMedia ASM1352R controller connects to the Z97/X99 PCH over PCI-Express 2.0 x2 to deliver 2x faster data rates than USB 3.0, with speeds up to 10 Gb/s, making it faster than a regular SATA 6 Gb/s connection. Copying files from your external hard disk or USB pen drive will be faster than ever!

The new MSI Z97A GAMING 6 motherboard is the world’s first motherboard to feature USB 3.1 and Type-C connectivity. Get all the performance benefits from USB 3.1 combined with the increased convenience of the Type-C connector. The USB Type-C connector is the future in connectivity and allows for effortless connecting of next generation USB devices through an easy to use connector. You simply can’t go wrong with this reversible connector, which eliminates the struggle of making sure the USB connector is facing the right way. You can blindly connect your USB devices at the back of your PC with MSI and USB Type-C.

International CES Innovations 2015 Design and Engineering Awards Honoree motherboard. MSI’s X99A GAMING 9 ACK is the world’s first motherboard to feature onboard USB 3.1. With the ability to process gaming network activity over LAN while diverting other applications to Wi-Fi, ACK featuring Killer DoubleShot Pro is the one and only true online GAMING solution. Additionally, the X99A GAMING 9 ACK motherboard is packed with an arsenal of premium features such as Turbo M.2, Audio Boost 2, 4-way SLI support and much more. Topping off the X99A GAMING 9 ACK’s features is Streaming Engine, a dedicated onboard hardware streaming solution for live streaming gaming activity at 1080p/60Mbps without impacting in-game FPS! Be sure to check the full MSI USB 3.1 motherboard line-up.