Every few years, ANTEC comes out with something truly special for the computer market. At CES 2006, they changed the face of the computer case market with the introduction of the P180; a revolutionary design that inspired products like the CoolerMaster Cosmos 1000 among others. Revisions of this case such as the ANTEC P182 have kept this concept revoutionary even to this day. This year at COMPUTEX 2008, we see ANTEC do it all over again with the introduction of the Skeleton Open Concept Case. 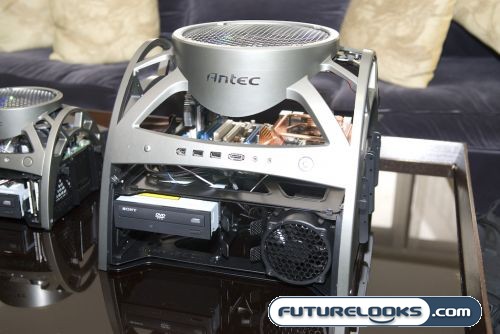 The Skeleton and the Skeleton Mini represent the growing need for PC enthusiasts to have a quick and easy way to swap out components while maintaining cooling and component security. Built for both full sized ATX and mini-ITX boards, the Skeleton Open Concept Cases give do it your-selfers both of these things in a very functional and elegant design that pays homage to its namesake. 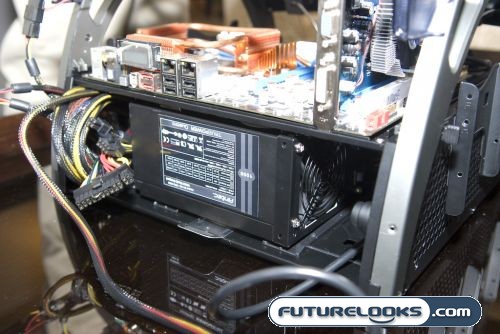 The large Skeleton features a slide out motherboard tray with room for all your components including some moderate sized heatsinks. The tray is also large enough to fit full triple SLI setups. When asked about the height restriction for larger monstrous heatsinks, we were told that with the enormous cooling provided by the adjustable (both speed and LED color) 250mm fan would make big and noisy CPU fans unnecessary. However, due to the open concept nature of the design, an external watercooling solution would be a fantastic compliment. 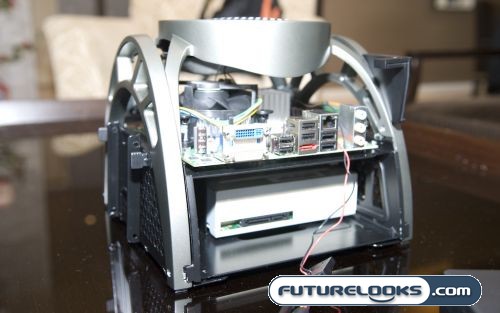 The Mini-Skeleton is still in concept form, but will feature room for a quick release optical bay, two 2.5 inch hard drives that clip onto the sides and the same slide out motherboard tray. Throwing down the cooling will be a 140mm fan with the same funky disco lighting and speed control.

In order to get you all hot and bothered about this great new product, we’ve prepared an exclusive walk through video for you to drool over. Antec’s own Han Liu, the man responsible for all the cool products, talks us through some of the sweetest features of the Antec Skeleton and Skeleton Mini cases.

As Han said, they are still working on tweaks in material and packaging for a August launch, but there will be no major changes to what you are seeing now. No details in pricing were released but Han did mention that it wouldn’t be cheap. Although open concept cases aren’t new, ANTEC has really given the product category some legs it can run with and we’re excited to get a hold of one of these for a throrough review when they become available later this Summer.

For more pictures of the new Skeleton, check out the Futurelooks Photo Gallery. Stay tuned to Futurelooks for more exciting news from ANTEC and the rest of our COMPUTEX 2008 Taipei Coverage!