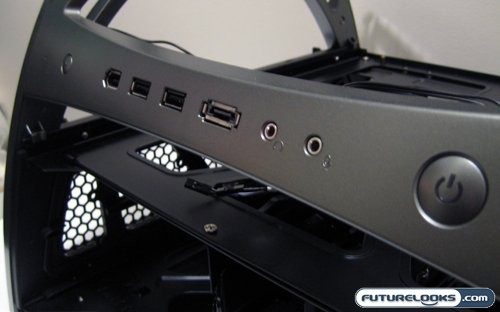 First we turn to the front of the Antec Skeleton, mainly because that’s where you can find what are now my favourite features on and open air case. They are the features that I long for with my use of the HSPC Top Deck, even though that case is very practical. Well the Antec Skeleton has what the formerly mention case lacks, a full selection of front mounted ports. This include a FireWire port, two USB ports, an eSATA port, and thankfully a set of front panel audio jacks. Why are these so important? Anyone who has had to work with SoundMAX chipsets, and their output selector, should understand. Basically it makes my use of both speakers and headphones much easier, and allows me to configure them seperately. 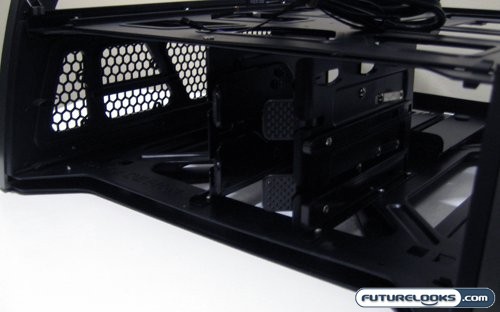 The lower portion of the front is where you’ll find the drive bays. As noted, the Antec Skeleton can support two 5 1/4″ drives and two 3 1/2″ drives. This should be more then enough for most builds. Even my overly spec’d test bed only features two hard drives for comparative testing, and two optical drives for DVD reading and DVD writing respectively. They are mounted using a rail system that does require some screwdriver work, but once they are installed they aren’t sliding anywhere. 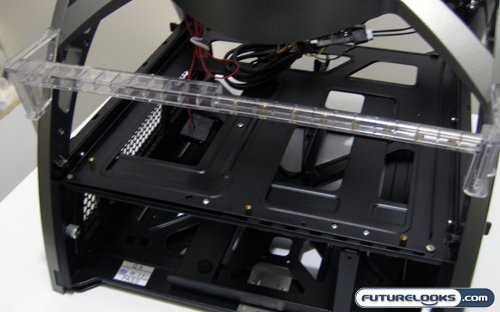 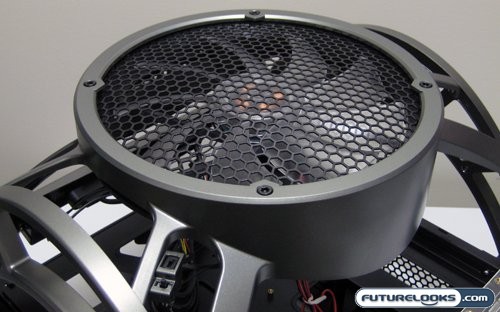 Cooling the entire rig is a huge 250mm case fan, blowing air from the top of the case down. Granted most of that cool air will be caught by the motherboard, but that’s where the hottest components tend to reside. The fan itself is a specialty Antec model, with a mutli-colour LEDs mounted around the rim to illuminate the fan blades. It has three speed settings, as well as different lighting settings, both of which are controlled by the two switches next to the fan. 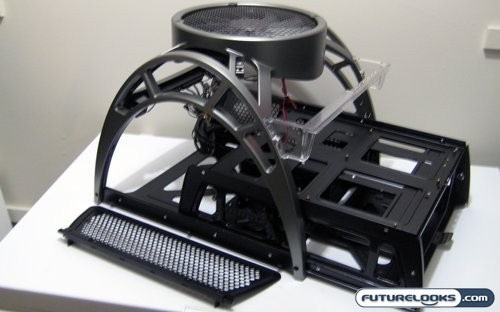 Before getting to the installation, we take one final stripped down look at the Antec Skeleton. As you can, the tray simply slides out for the main structure of the case. What isn’t pictured is that this isn’t some cheap base metal on plastic slide. Antec actually went the distance and installed sliders like what you’d see on a drawer or cabinet. Speaking of easy removal, the mesh side panels can easily be removed to further aide in the cabling side of things while sliding the motherboard in and out. The plastic bar that holds the expansion cards in place is actually removable. I simply forgot to stage that for this picture. Anyhow, lets get a test bed into this case and see how it stacks up.