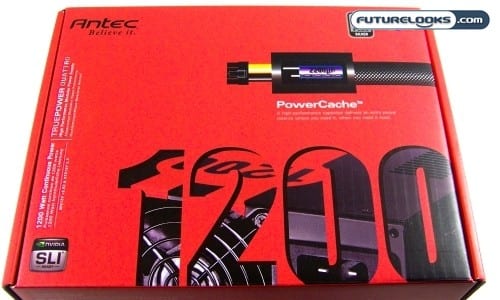 A few years ago, manufacturers were shipping out 1000 watt power supplies like hot cakes. That’s because, a lot of regular folks thought it would improve their computer even though they had no real use for that kind of power. With the help of resourceful testers and engineers, users began to realize there was far more benefit from using true rated power supplies offering better efficiency than the cheaply made higher wattage nuclear power plants.

With the establishment of the Extraordinary League of 80Plus, new efficiency standards have motivated many a manufacturer like Antec to continue designing and producing better power supplies. With the release of their CP, Signature, and TruePower series, they’ve offered 80Plus PSUs for every kind of user. They’ve got something for the professional right down to the guy who’s pressing the confirmation button for some extremely power hungry nVidia GTX480 video cards. Finally, we have a bitter sweet real need for the Antec TruePower Quattro 1200 Watt power supply! 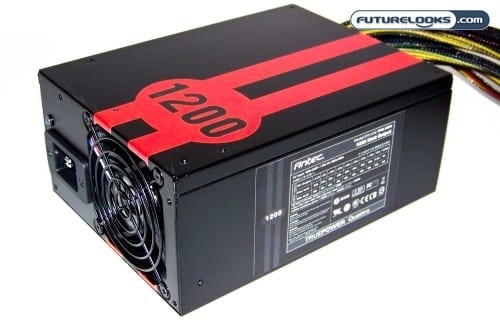 Like most power supplies in this market segment, the Quattro TPQ-1200 is a beast. It’s a fully loaded and heavy PSU engineered to provide a solid, reliable 1200 watts continuously to any computer that needs it. Typically, this kind of PSU is built to provide more than that. Just how much, we’ll find out in testing.

As you no doubt already guessed from the intro, this is a full on 80Plus Silver Certified power supply. What this means is it must be able to maintain an 85% efficiency power to watt ratio at 20, 50, and 100% load in order to gain this certification. It also means, you’ll be wasting a lot less energy over the next year which is a very good way to stick it to the energy corporations. 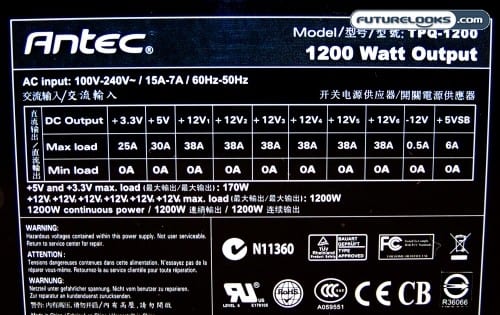 Like any ATX power supply, there are +3.3V, +5V, +5VSB, and -12V power rails. However, the TPQ-1200 offers a total of six +12V power rails offering 38 Amps each! Ripple/Noise is one thing that can effect the current traveling down each rail. For this reason, PowerCache 2200uf capacitors have been used in line on every modular and hard wired cable attached to the power supply to ensure a steady stream of power. This also includes the main 24-pin power connector. 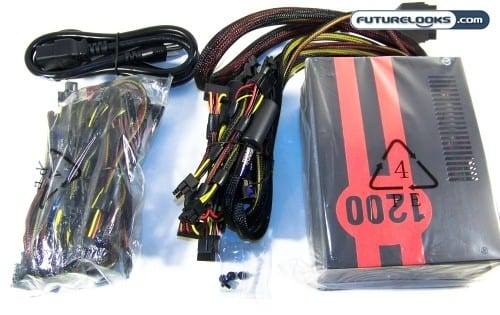 Like an over zealous TSA agent, the box’s contents were inspected while ever so carefully while placing the items on the work top. Other than a very thin leaflet manual with the product notes, there is the power supply itself, bag with four mounting screws and a plastic bag containing all the extra modular cables one might need if the hardwired cabling isn’t enough.

Though a fancier Velcro type bag is a nice touch, I wouldn’t mind seeing a reusable, zip-lock style bag (red in color?) for storing the extra cables. Guess it wouldn’t hurt to stamp TPQ-1200 on the side should you toss the box later. We also wouldn’t mind seeing some handy (and very cheap) Velcro straps to spruce up the bundle. We love those handy straps!