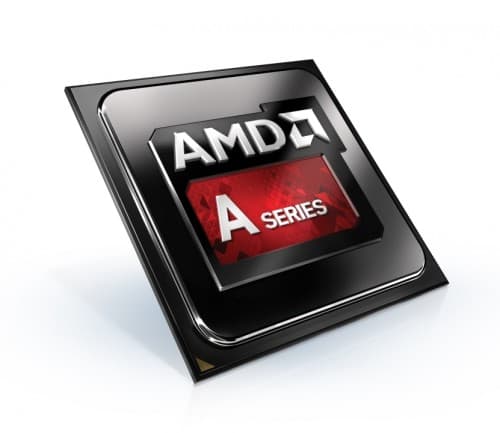 The introduction of the original AMD FM1 APU (codenamed Llano) was an innovation because, for the first time, a CPU maker treated the on-die GPU as an important piece of the silicon. And over the last 3 years, AMD has continued to refine the APU design with improvements in every aspect from generation to generation. The new Richland series looks to continue this trend and represents the first drop-in updates to the current FM2 socketed Virgo Platform. Lets breakdown the new APU to see if an upgrade is warranted over the previous generation. 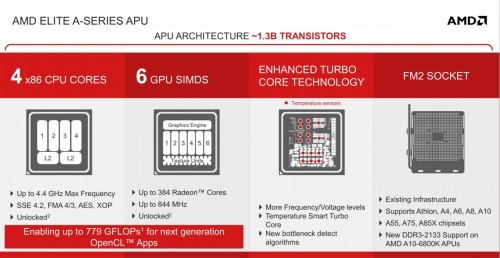 Firtstly, there has been no major change to the architecture of the new Richland APUs. Instead of building another architecture, AMD instead focused on refining of the current Piledriver design. Improvements include higher clock speeds, better power management, improved memory support, and also support for wireless displays. All this is packed into a chip that still works with the current FM2 socket.

These A10 Elite A-Series uses the same 32 nm SOI manufacturing with the same 1.303 billion transistors, but utilizes them better. An internal temperature sensor is now apart of the package for more efficient power management through better frequency control. The power throttling applies to both the CPU and GPU portion depending on the workload for better performance in all areas.

The IGP is now supported by AMD Turbo 3.0 with a default clock speed of 844 MHz (44 MHz higher than previous generation) and turbo speeds of up to 950 MHz. This is directly tied to the overall TDP of the chip so it will affect how turbo is used with the CPU as well.  The AMD Elite A-Series also now natively supports 2133 MHz RAM at 1.5 volts. The previous series could only operate with 2133 MHz RAM with inconsistent results.

The A10-6800K and A10-6700 are priced at $149.99US and $148.99 US respectively which places them $20 above the A10-5800K. This price reflects the fact the Richland counterparts to Trinity chips are 200 MHz to 300 MHz higher in default clocks speeds and AMD Turbo clock speed. Lets take these Elite APUs and put them to the test against their predecessor to see how much of an upgrade they bring to the table.

The test system this time around will be almost identical to review of the A10-5800K except for a change in the motherboard to my favorite from our previous FM2 motherboard round up. There have been a number of updates to benchmarking software and I will be using the latest versions of these. Note that the memory speed was 2133 MHz for both the A10-6800K and A10-5800K while the A10-6700 was limited by its on-die memory controller to 1866 MHz (9-10-9-27).

Now we’ve got the software and hardware load out described, let’s see if there were any issues to note with installing and upgrading to the new Richland APUs! 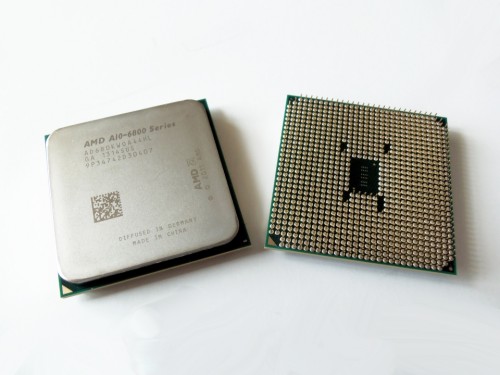 As stated earlier, the A10-6000 series is structurally the same as the the A10-5000 series and uses the same FM2 socket. This makes the A10-6000 chips a drop in upgrade for anyone with a motherboard using a current A55, A75, or A85X chipset. We highly recommend updating the BIOS for your motherboard prior to installing the Richland chips.

Once installed, the A10-6800K wastes no time impressing us with its overclocking ability. Let’s have a look at that next!