The CPU and GPU can be overclocked independently, but their shared power creates a kind of counter balance. Overclocking the CPU limits the GPU overclocking potential and vice versa. I easily got the CPU up to 5.0 GHz, but going any further decreased stability. I also got a GPU overclock up to just under 1100 MHz by locking the CPU to its default speed. Keep in mind this is with my usual overclocking prep of disabling any power management and turbo features. 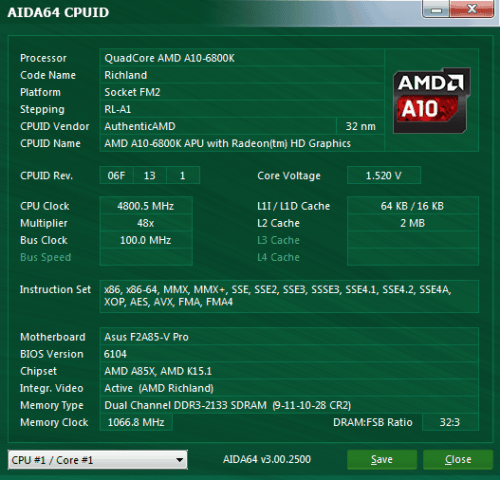 The beauty of the A10-6800K’s flexibility is you can basically customize your overclock to fit your needs. If you need GPU power to get every frame out of a game, a faster CPU for tasks that demand it, or a balance for those who want a little of both. I opted for the latter with a CPU speed of 4.8 GHz and GPU speed of 950 MHz at 1.425V to get more out of every test conducted.

The story is very different with the A10-6700 as it is not an unlocked chip. You can still overclock the chip via bus clock, but it can be exceedingly difficult. What I found surprising is the memory controller was not able to operate with RAM set higher than 1866 MHz. In the past, every APU I tested could handle one multiplier higher than their specs but not this time. The listed 1866 MHz max RAM speed is set in stone.

Now that the chips have had a chance to show their full potential lets get into testing each to see where they stand today.

We begin with a total system performance test from FutureMark using their latest software. This should give us a good idea of the basic performance difference between the chips being tested and what we can expect going forward. 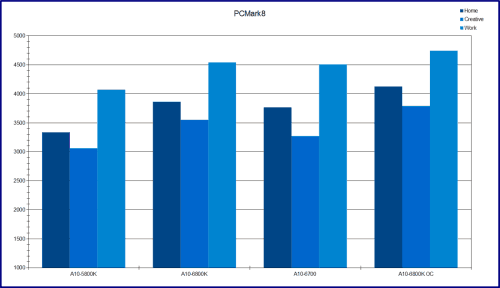 As you can see, the new AMD A-series Elite chips hold an advantage over the A10-5800K in all three categories. Even the A10-6700 has a distinct performance improvement with virtually identical clock speed at 100 MHz lower default and 100 MHz higher max turbo. This could be due to either the 65W A10-6700 being able to hold max Turbo longer due to the lower TDP or design improvements internally. Lets look deeper to find out which is true.

Lets move right into graphical performance with 3DMark. This should be interesting as the IGP is the only real difference. The new AMD HD 8670D supports Turbo boost and has a 44 MHz higher default clock speed. This means the 800 MHz HD 7660D on the A10-5800K has its work cut out for it with the HD 8670D at 844 MHz (950 MHz Turbo). We used the Fire Strike Benchmark which is normal for dedicated desktop graphics cards, to push the limit. 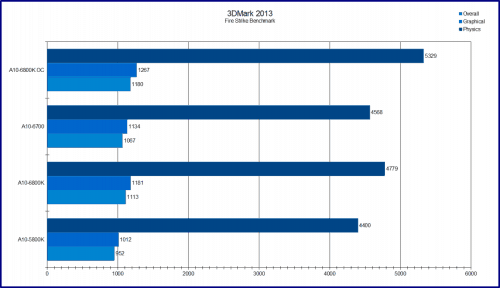 We know from past experience the AMD A-series APUs always have a good showing in graphics tests. Even compared against entry level desktop graphics cards. The A10-5800K is still left behind here by over 150 points in both overall and graphical performance. The overclocked A10-6800K adds an additional 70 point difference to that. I know AMD Turbo did not help with this score since the CPU  is being taxed as well. It was never allowed to reach 950 MHz so lets see if we can get some use out of this new feature with a less CPU intensive test.

Now we will look at these APUs in a slightly different light with Resident Evil 6 using DirectX 9c. This test does not leverage the CPU nearly as much due to lack of physics. Instead the test focuses on GPU performance in a variety of environments ranging from small corridors to large areas filled with the undead. Tests were done at 1920 x 1080 with maximum graphical settings, no motion blur, and VSync disabled. 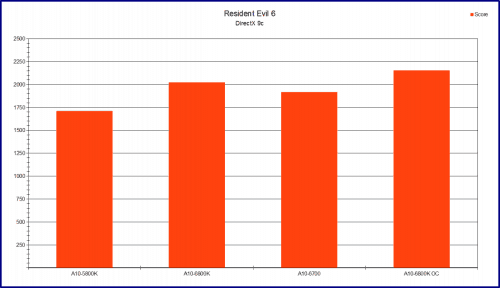 This time I believe it is clear AMD Turbo 3.0 was able to run the GPU at the 950 MHz turbo boost mode. Both A-series Elite APUs cruised pasted the A10-5800K with more than a 200 point advantage. The A10-6800K did maintain a distinct advantage over the A10-6700, but this could be due to the higher clock speed of the CPU.

Finally we will put the IGPs from the AMD A-series Elite to the ultimate test in actual gaming. I tested these chips for both games at 1920 x 1080 using the game’s recommended settings. Metro: Last Light elected high quality, 0.5 SSAA, 16X AF, Low motion Blur, and Normal Tessellation. Battlefield 3 selected the High pre-set. We think both games are being a little ambitious with these settings so lets see how it worked out. 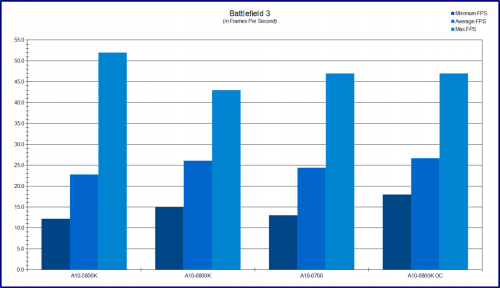 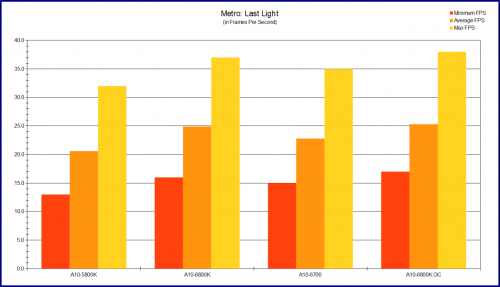 As expected, all three chips fail to hit 30 FPS which many believe to be the threshold for playable gaming performance. We believe the minimum FPS should never drop below 30 FPS for fluid gameplay. Interestingly, the overclocking of the A10-6800K had virtually no affect on average frame rate, but does improve minimum frame rate in both games. The A10-5800K didn’t stand a chance as it fell behind an average of 14%.

We can clearly see the performance is still not enough for such extremes, but has improved by a significant margin over the last generation. Both BF3 and Metro Last Light can be played well on an AMD A10-6800K or A10-6700 if you tweak the settings to be more reasonable. They could be disappointing to PC gamers, but could work as a hold over for those building on a budget. You can enjoy your current games while waiting to buy a dedicated graphics card.

Now lets isolate the CPU and see if it has improved. This should also help to narrow down if raw clock speed is the key to the graphical performance figures.