The first thing I would like to know about any upgrade is how it will realistically affect my system’s overall performance. PCMark07 provides a comprehensive test to simulate real world use which should give us a measure affect on my test system. The other system being tested is my standard testing rig where the only difference is the memory. 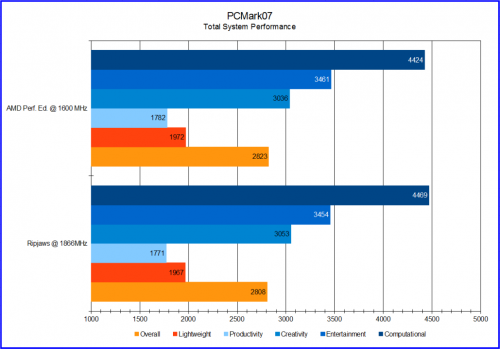 The AMD Performance Edition Memory manages to squeeze by with a victory here. Realistically the performance difference is a maximum of 1% in computational tests, one of the two tests that the AMD memory fell behind on. It would seem that the 1600 MHz memory is holding the CPU performance back by 1% considering and the G.Skill RAM comes out ahead. The AMD Performance Memory makes up ground in other areas thanks to its comparatively tight timings.

In this test, I am not looking for a large difference in performance with Cinebench 11.5. This test is mainly focused on the maximum performance of the CPU so I want to verify if the results from the PCMark07 tests are consistent. 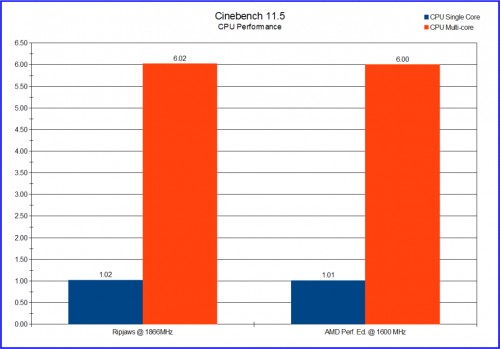 As you can clearly see, there is some limitation on the performance of the CPU in these tests. It would seem that the difference is in there, but hard to quantify during real world use.

Using Sandra 2012 memory testing suite I decided to just test the maximum memory throughput. It is clear in our previous tests there seems to be a hindrance to the CPU with the 1600 MHz speed of the AMD Performance Edition Memory. If speed is the issue, then we should be able to see the difference in throughput. 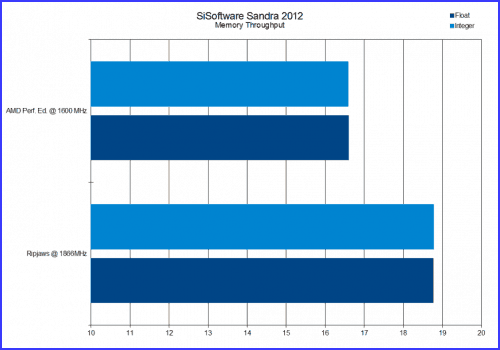 The 1866 MHz G.Skill RAM has a 2.16 GB/s to 2.18 GB/s advantage. It would seem this allows the CPU to work just a little better in CPU intensive tasks. This will also affect the loading times of games and larger programs, which I will discuss in short order. But first, a look at overclocking and undervolting.

The AMD Performance Edition Memory defaults to 1600 MHz, 9-9-9-28 timing at 1.5V. It performs well at this speed, is 100% stable, and saves a little power with it only being at 1.5V. As such I decided to see if I could save a little more by running the memory at a lower voltage. I was able to maintain 100% stability as low as 1.4V which is nice if you are using this with a low voltage AMD APU system. Once I manually adjusted the memory voltage to the 1.65V, I could move to the 8-9-8 timing that the AMD Performance Edition is rated to run at. The difference in responsiveness is immediate and easy to feel while using the system.

Overclocking of the AMD Performance Edition memory was a completely different story. After several dozen failed configurations I finally found the 1866 MHz sweet spot of 10-10-10-32 timings at 1.65V. For some reason increasing the voltage up to as high as 1.725V seemed to have no effect on stability, nor would it allow me to lower the timings either. I gained 0.75 GB/s in memory throughput, but all other tests showed signification losses in performance. Its a catch 22 as you will either lose performance or have your overclocking hindered by this RAM. 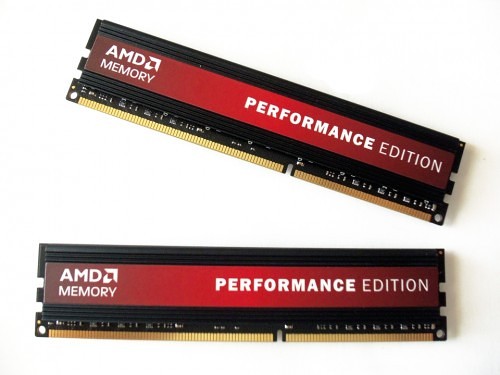 The AMD Performance Edition 8 GB (2 x 4 GB) Memory kit is available at online e-tailers for around $54.99 US. This RAM stands up well against similar kits thanks to both its aggressive timing and pricing. Tests show it can hold its own against 1866 MHz RAM which is the default memory speed for the AMD chips this RAM is designed to support.

I found that the AMD Performance Edition memory lags only in one area during daily use. When called upon to load large programs, the load times were affected negatively. There is a clear difference in loading times for PhotoShop CS4, Battlefield 3, and Nero 9 when compared to memory at 1866 MHz. The additional throughput helps those large programs allocate memory faster, but does not affect smaller programs such as media players and web browsers.

The only other shortcoming here is the lack of AMD B.E.M.P. (Black Edition Memory Profile) which is AMD’s version of Intel’s XMP system. I just don’t understand why it is not being support by AMD’s own products. I can only assume it is either being overhauled for the forthcoming AMD Radeon Edition Memory, or AMD has abandoned the B.E.M.P. project all together. Your guess is as good as mine.

The lack of AMD specific features and little overclocking headroom leaves this memory kit with a lack-luster feel. It just seems like there was an opportunity here to create a unique, stand out product, but AMD settled for good enough. Hopefully the forthcoming AMD Radeon Edition Memory will bare its fangs and bite back. For now, these modules are merely comparable to other products on the market and unless you want the full “AMD Look” you’ve got these and a few other modules to pick from that may be a bit less expensive.