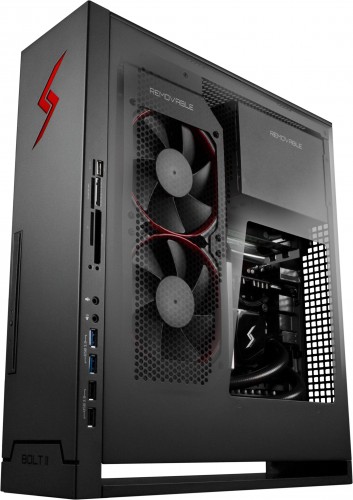 The Steam Machine news just keeps rolling my way. First up we have an announcement from Digital Storm, with their release of a hybrid OS small form factor system. The Bolt II is touted as the first liquid cooled Steam Machine, and will feature installs of both Windows and SteamOS allowing for maximum compatibility and the ability to play any game from of your sofa. Specs aren’t released yet on this system, but for the stated price tag of $1,899 you can assume it’ll be rather well appointed.

On the other hand, Dell and Alienware made more of a hybrid announcement today. They have their own SFF Steam Machine waiting in the wings, and have been in collaboration with Valve on the project. Details were just as light from the big alien head, but one thing did catch my eye. Along with their SFF Steam Machine, Alienware will be making the X51 desktop system available as a Steam Machine in 2014. This gives more variety in form factor, and doesn’t limit your choice of hardware. 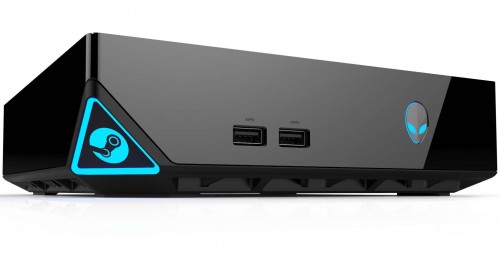 Press releases for both products are below, and Futurelooks keeps on rolling with the CES 2014 coverage right here.

Digital Storm’s second generation SFF system features a refined look, increased accessibility and advanced thermal design. With double the cooling power of its closest competitor, Bolt II differentiates itself from other SFF and Steam Machine systems by focusing on delivering the best graphics possible and refusing to compromise on performance.

“We (Digital Storm) are not looking to compete with console pricing,” said Rajeev Kuruppu, Digital Storm’s Director of Product Development. “We’re taking aim at the high end of the market, targeting consumers that demand the best possible gaming experience and who are looking for a PC capable of playing any title on their new 4K display.”

Unsatisfied with simply offering the best performing SFF cooling system, Digital Storm included the company’s proprietary HydroLux control board to provide gamers with full command of the system’s unrivalled cooling capabilities. HydroLux monitors the Bolt II’s temperature in real time, automatically striking the perfect balance between thermals and noise. HydroLux can also create a custom look by controlling the LED lighting inside and shifting the color spectrum to fit the user’s preference.

Digital Storm’s engineers eliminated SFF upgradeability concerns with a clever removable compartment system that provides easy access to key components. The graphics card, storage drives, optical drive, and cooling system can all be removed and serviced with minimal hassle, making the Bolt II infinitely more upgradeable than any other SFF computer on the market.

Bolt will be available later this month starting $ 1,899 at http://www.digitalstormonline.com/bolt-ii.asp.

·         Four-year collaboration between Alienware and Valve result in an easy, open and simple way to play PC games in any room

Las Vegas, NV, and Toronto, Jan. 7, 2014–Alienware, a pioneer in specialty high-performance PC gaming systems, is once again driving innovation in PC gaming. Alienware and Valve, the developers of the world’s largest online gaming platform and the creators of the Half-Life franchise, have been collaborating on designing the first dedicated Alienware Steam Machine gaming console.

Alienware designed its upcoming Steam Machine to deliver the benefits of PC gaming in an incredibly small footprint, providing the best balance between size, performance and aesthetics for the living room gaming experience. Its sleek design is both distinctively Alienware yet unobtrusive in a media cabinet. The Alienware Steam Machine echoes the build quality and advanced engineering that are the hallmarks of the brand including a custom-built chassis to provide optimal thermal and acoustic management for a gaming console destined for the living room.

“With the introduction of the X51 system nearly two years ago, Alienware kicked off an evolution of small form factor PC gaming systems designed for every living area,”  said Frank Azor, Co-Founder and General Manager of Alienware. “When Valve and Alienware began collaborating on our vision for a PC gaming console several years ago we could clearly see we were on to revolutionizing PC Gaming forever.”

Since Alienware began pre-installing Steam on systems four years ago, Alienware has had the unique opportunity to work closely with Valve on multiple fronts.

“We have been working with Alienware since we began defining our vision of the Steam Machine. Alienware’s historic commitment to gaming, their design and engineering capabilities and their global reach made them an ideal partner for us on our Steam Machine project,” said Gabe Newell, Founder of Valve. “The result of our collaboration is the Alienware Steam Machine, a console that encapsulates the full potential of what a Steam Machine should be.”