Most of us would likely agree that the Razer Blade family of gaming notebooks are among the best in the business. They’re reasonably thin and light, given the kind of horsepower they pack under the hood. And if you’re itching to get one for yourself, Razer has just given you at least a couple of new reasons to pick up the Razer Blade 2017.

The form factor remains unchanged, so you still get the sleek black gaming notebook with the obvious Razer branding on the back. Pop the sucker open, though, and you’ll be treated to several new upgrades. Don’t like being stuck with mere full HD 1080p? No problem. The Razer Blade 2017 has an option to upgrade to a 4K UHD display instead.

Need more oomph to power that higher resolution display? The 14-inch Razer Blade 2017 has also been upgraded with a new 7th generation Intel Core i7 quad-core processor (Kaby Lake), plus NVIDIA GeForce GTX 1060 graphics. It’s not quite the GTX 1070 or the GTX 1080, but it’s not like the GTX 1060 is a slouch either. You also get faster memory, all in a unibody CNC aluminum chassis that measures a mere 0.70 inches thick and weigh less than four pounds.

Pricing starts at $1,899 US and it starts shipping today in select markets via Razerzone.com. Check the video and press release for more information. 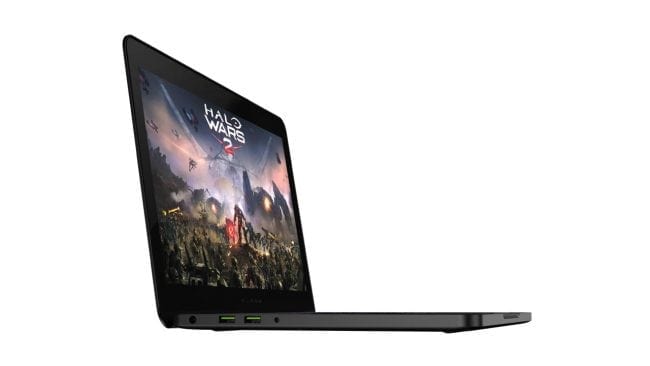 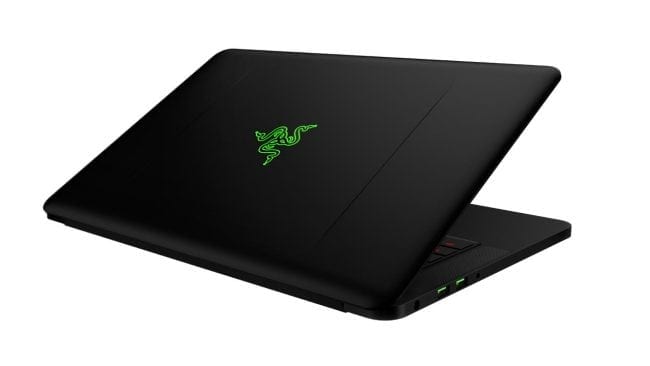 The latest generation of 7th Gen Intel® Core™ i7 quad-core processor in the new Razer Blade is more powerful and more efficient than last year’s model, the “Best Portable Gaming Laptop” on the market according to Digital Trends (November 2016). The powerful CPU of the new Razer Blade achieves double-digit increases in productivity benchmarks and is paired with NVIDIA® GeForce® GTX 1060 graphics to deliver the best frame rates available in an ultra-thin laptop. The performance of the new Razer Blade is matched by its light weight and durability. Measuring only 0.70 inches thin, it weighs a little more than four pounds and is housed in a unibody CNC aluminum chassis.

A Full HD panel comes standard on the new Razer Blade, while a new 4K UHD touchscreen option will be available for the first time on Razer’s 14-inch model. Razer Blade users can enjoy extraordinarily clear visuals and intense frame rates in games with the Full HD display, or step up to the clarity of 4K for ultimate picture quality and the convenience of a touchscreen interface.

“The Razer Blade sets the benchmark for performance in thin laptops,” says Min-Liang Tan, Razer co-founder and CEO. “More users embraced this flagship computer model in 2016 than ever before, and we are excited to make it even more available worldwide this year. Beyond gaming, it has been really gratifying to see people enjoying the power and portability of the Blade for video editing, music creation and software development.”

The Razer Blade comes standard with 16 GB of DDR4 dual-channel memory running at 2400 MHz, Killer Wireless-AC and Thunderbolt™ 3 connectivity. The system offers PCIe SSD storage options up to 1 TB, providing fast data transfer speeds. Other features include a comfortable and accurate anti-ghosting keyboard that is powered by Razer Chroma™. This technology unlocks a color palette of 16.8 million colors and a virtually endless array of keyboard lighting effects that can be customized and synchronized to display in-game events.

Razer is one of the most awarded laptop manufacturers in recent history. Its 12.5-inch Blade Stealth Ultrabook won more than 20 awards in 2016, while the 2016 Blade and redesigned 17.3-inch Blade Pro received lauds of their own from the editorial and gaming community. Razer’s Project Valerie laptop concept debuted at CES 2017 and took home more than 30 accolades at the world’s biggest technology show.

The new Razer Blade Full HD systems are available now in North America and Europe at RazerStore.com and in-person at RazerStore San Francisco, as well as other select retailers and etailers. The 4K UHD model is expected to be available in Q2. For more information, visit Razerzone.com/blade.

Razer™ is a world leader in connected devices and software for gamers.

Razer is transforming the way people play games, engage with other gamers and identify with the gamer lifestyle. Having won the coveted “Best of CES” award consecutively for seven years, the company’s leadership in product innovation continues to create new categories for the gaming community that is estimated to have over 1 billion gamers worldwide.

Razer’s award-winning design and technology include an array of user interface and systems devices, voice-over IP for gamers and a cloud platform for customizing and enhancing gaming devices.