In recent news, as many around the world have heard, Apple has announced some interesting products. Now whether or not you’re a fan of Apple and their clean lines, one product that has got some people’s attention has been the 27-inch 5K Retina iMac.

Yes, you heard it right, 5k. Not 1080p or 4K, but 5K. Why stick to what is currently out on the market (let alone not readily supportable) when you can go beyond and deliver more pixel goodness to the peepers! The 5K display will boast a resolution of 5120×2880 which is about 14.7 Million pixels.

What does this 27-inch Retina iMac have under the hood? Here is a quick run down on the base specifics:

Not bad, though it will set you back about $2,499, which is a bit high for a machine with those sort of specifications when compared to high end all in ones on the PC side, which now run with the latest NVIDIA GTX 900M series GPUs. But it is nowhere near as expensive as the highest spec Mac Pro. Though with a resolution of 5120×2880, I am sure people out there will still go out and buy them. 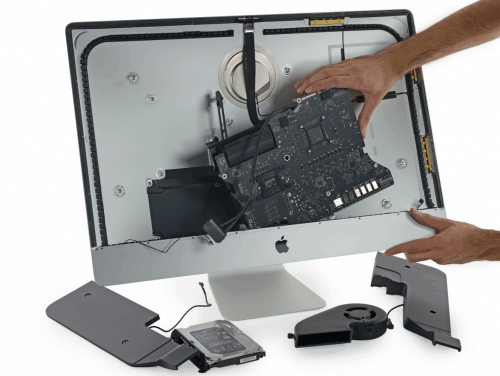 Are you a DIYer? Are you curious about how customizable the new 27-inch 5K Retina iMac is? Well, according to iFixit.com, they rated it with a Repairability Score of 5 out of 10. Ouch! At least the memory modules aren’t soldered on like the recently released Apple Mac Mini.

You can easily access the RAM, but you’ll have to disassemble the screen to get at the hard drive or the SSD. iFixit.com does give it a bit higher score than I would have, but if you do manage to remove the screen properly, most components are fairly modular, which can also mean, replaceable.