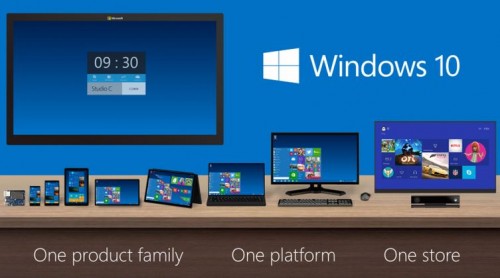 I guess we should have known. Microsoft has always had a rather shifty sense of basic arithmetic, as we had assumed that they were following their own formula with 7 + 8 = 9. As it turns out Windows 9 isn’t the combination of Windows 7 and Windows 8 that we had anticipated. Instead, Microsoft decided to leapfrog Windows 9 entirely to formally announce Windows 10.

Yeah, it’s kind of weird to skip a number altogether, but this shifty numbering scheme is hardly new to the folks at Microsoft. Somehow, we went from the Xbox to the Xbox 360 to the Xbox One. And somehow, we skipped a whole bunch of numbers to arrive at Office 365, so I guess Windows 10 isn’t all that odd. As we expected, Microsoft is unifying its Windows brand, getting rid of the separation with Windows Phone and Windows RT so that it’s the “same” Windows 10 being run on smartphones, tablets, laptops and desktops.

For the most part, the leaked screenshots that we’ve been seeing are holding up to be true. The Start Screen is gone, getting replaced with a hybrid Start Menu that has the regular Windows 7 kind of feel, but with the addition of the Live Tiles from Windows 8. You can customize the Start Menu to be as big or small as you’d like, resizing those Live Tiles to your heart’s content. The universal search has been upgraded to include web results too, presumably from Bing.

Microsoft says that Windows 10 will provide more of a unified experience. This starts with having the same OS across different devices, but they’ve also eliminated the separation between “Modern” apps and the traditional apps in that the “Modern” apps now run in a regular old window. They’re going to call them “universal” apps in this context. Other new features include Task View, allowing you to see all your windows at once, and the leaked multiple desktop function like Spaces on a Mac. The Charms bar should be updated in Windows 10 too, but they haven’t shown that yet.

Indeed, Windows 10 is still a work in progress and Microsoft reminds us that it’s a very early build. Things could still change, but we hope that the promise of a free upgrade for Windows 8 users still holds true. In any case, we hear that the insider preview is on its way, so if you want to get your hands on some Windows 10 action before anyone else, you’ll want to hit up the folks at Redmond for that. The official launch is planned for late next year.