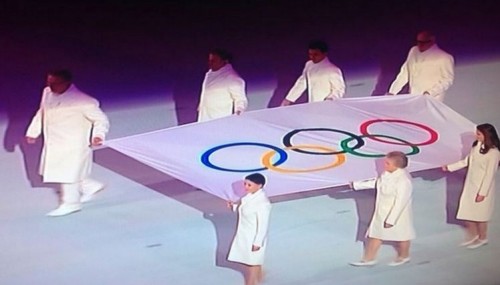 By now, you’ve surely heard all the horror stories from visitors to Sochi for these Winter Olympic Games. You’ve probably heard about the controversy surrounding stray dogs, the “dangerous” yellow water coming out of hotel taps and the numerous uncovered manholes. But even so, the Olympics are normally a time to celebrate the triumph of human physical ability through sport. We see ski jumpers, hockey players, speed skaters… and a video game player?

As it turns out, Alan Enileev was involved in the opening ceremonies in Sochi. He was a gold medal winner not at a former Olympic Games, but rather at the 2006 World Cyber Games in Italy. The former world champion played The Fast and the Furious series from EA. His role in the Sochi opening ceremonies didn’t involve playing any games or racing about the track in a sports car. Instead, if you’ll notice in the shot above, he got to hold the Olympic flag.

He has documented some of his Olympic journeys on his Drive2.ru blog. Interestingly enough, the reason why Alan got into racing games in the first place is that his passion for racing real cars got way too expensive. He quickly improved his skills, got into the pro circuit and won that gold medal. He also won a bronze in 2007, turning him into the “best known virtual car racing driver in Russia.” With that cash, he finally went on to help form a real racing team and is involved with the National League of Computer Sports (NLKS), which organizes charity events for underprivileged youth.

It’s unlikely that we’ll be seeing the world finals for DotA or League of Legends on the Olympic stage any time soon, but the participation of guys like Enileev demonstrate that e-sports are really starting to be taken seriously by even the mainstream international market.