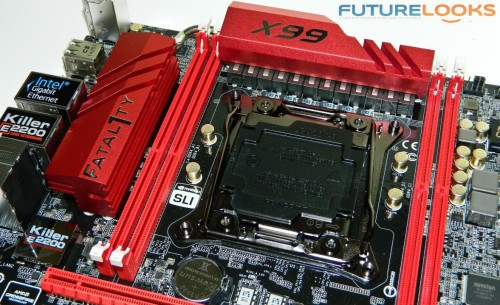 Cost continues to influence consumer spending. This is especially true with today’s X99 motherboards. Some feature rich models cost a premium while others are more affordable. Affordable boards can means fewer premium features, though reliability and performance should never be sacrificed. However, another way of offsetting costs while adding a few features back is to build one on a Micro ATX form factor. That’s exactly what we’re looking at today with the ASRock Fatal1ty X99M Killer, which is an attractive gamer theme motherboard, in a smaller size. 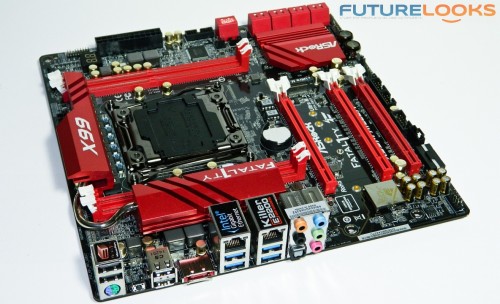 The ASRock X99M Killer micro-ATX is one of two boards of their kind in their X99 line up which include the OC Formula, Fatal1ty, Extreme and Work Station (WS). Naturally, the Fatal1ty has a theme and features that entice gamers, while the X99M Extreme is more mainstream. So, what makes the Fatal1ty X99M Killer so special?

A couple other gamer features include the Macro Key and Sniper Key, aimed at giving gamers an edge. The Macro Key software helps you set up hotkeys and macros which come in handy for quick loading profiles, key bindings, or skill combinations depending on your game. A decent gamer oriented keyboard also comes in handy.

The Sniper Key controls your mouse sensitivity on the fly. With the key enabled, your mouse DPI changes to help lessen cursor movement. No, it won’t aim for you but it’ll help you zero in a target better. Interestingly, many high end gaming mice also feature on-the-fly DPI changes but if you don’t have one, Sniper Key is as close to an aimbot as you can get without giving in to the sad existence of cheating.

Finally, the last important feature is the cost of the board. The board will hit the market at $249.99 USD at most retailers. 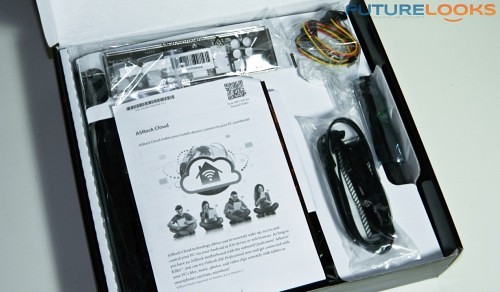 The bundle is very basic. It includes two SATA data cables, two SATA power adapter cables, manuals, software DVD, SLI/CrossFireX ribbon and an IO shield. It doesn’t get any more simple than that. While this may seem meager, we’re okay with it if the money was spent on physical board features and components rather than the bundle. Lets look at the board and find out if this is the case.

A Closer Look at the ASRock Fatal1ty X99M Killer 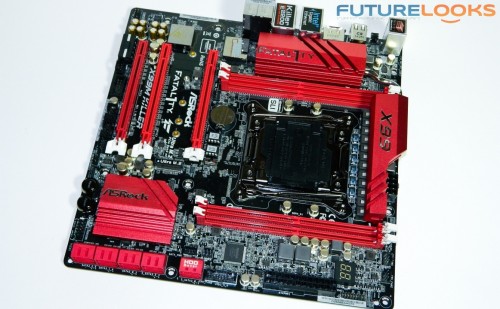 The ASRock Fatality X99M Killer m-ATX motherboard is quite attractive with the red on black gamer theme. Despite the compact nature of the board, all the USB, SATA, fan, front panel, and auxiliary power are located around the edges of the board, which is great for easy access.

The CPU socket has several beneficial components that are used to ensure stability, processor scaling and of course overclocking. These components include NexFET MOSFETS found next to the memory and CPU sockets, which are the flat design, for much better efficiency as well as cooler operation, and better heatsink compatibility. Power Chokes line the upper heat sink providing up to 60 Amps which is helpful with providing continued stable current improving VCore voltage. While this can improve standard performance, it also also helps when overclocking.

Storage needs are met with 10 SATA3 6Gb/s red ports utilizing the Intel X99 chipset. Unfortunately, like most motherboards, there is one caveat when implementing the M.2 interface. The SATA port 3 shares the bus with the eSATA port on the back. And, SATA port 2 shares the bus with the Ultra M.2 socket. Typically, this means the port may be inactive depending on the bandwidth the storage devices consume.

The three expansion slots (PCI Express) are spaced just right for installing 2, 2.5, or 3 slot graphics cards. That of course leaves no other slots for additional cards like RAID or audio cards. For most gamers, the Intel X99 chipset supported RAID protocols are honestly more than enough. 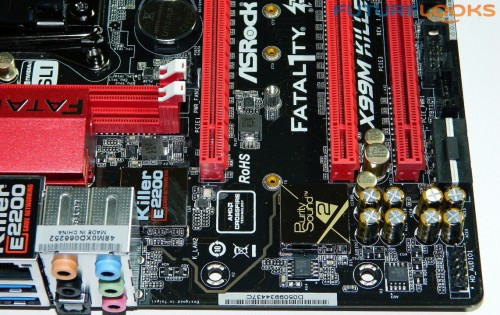 The Purity Sound 2 feature is basically an upgraded Realtek ACL1150 audio processor. This processor is capable of quite a bit more if the partners unlock the features through licensing which usually increases costs. In this case, ASRock added Nichicon audio capacitors, a 115dB SNR DAC amplifier, a front port TI NE5532 amplifier, EMI shielding and of course better isolated PCB components to prevent noise. Audio should be just fine which we’ll check in testing.

Let’s build a system and get on to some testing!